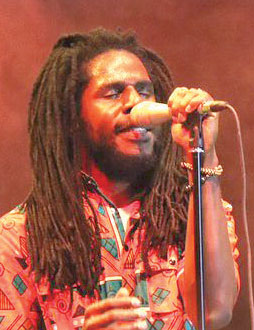 Sheraton hotel gardens was the venue for the Pulse Jam Fest on Saturday, as Jamaican reggae star Chronixx showed how it is done in Kingston.

By 6pm, there was already a sizeable crowd in the gardens and Beenie Gunter, Nina Roz, Rabadaba, Cindy, Weasel, Jose Chameleone and Maddox Ssematimba were curtain-raising for Chronixx.

Weasel, Vampino, Cindy and Maddox’s performances were arguably the most memorable from the local servings. Weasel focused mainly on his hits with Mowzey Radio (RIP), doing Ability, Magnetic and Lwaki Onumya as the nostalgic audience sang along.

He was later joined by brother Jose Chameleone for their hit, Bomboclat, sending the audience into frenzy. Cindy is without doubt the best female live performer currently. She put on one hell of a show; the only other local artiste to come close was Maddox, who got revellers grooving to Nakatudde, Namagembe, Easy, Irene and Omuyimbi.

He then embarked on an electric performance, doing songs from his first album, Dread and Terrible to his last album, Chronology. As expected, his hit, Smile Jamaica was a crowd favorite. Fans sang along as Chronixx remixed the song, replacing Jamaica with Uganda.

For two hours without break, Chronixx jammed away and when he left at midnight, many remained glued in position hopping for an encore, until his band started packing away equipments.