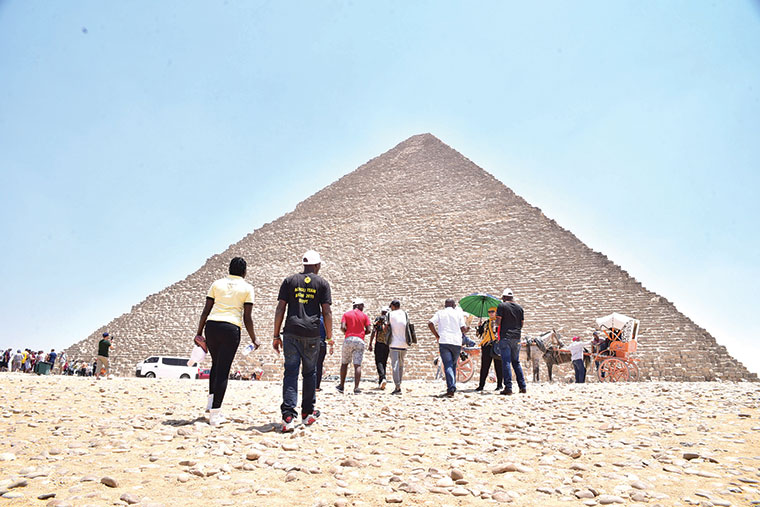 When I set out to cover the on-going Africa Cup of Nations (Afcon) in Cairo, Egypt, the only information I had about the city was that it is cosmopolitan in a way that many cultures and lifestyles are represented there. However, it took me only a few seconds after landing at Cairo international airport to realise it was going to be an eventful stay.

The weather here makes the hottest day in Kampala seem cold, because you may think your skin is about to peel off in the heat!

Then came the wakeup call when my camera got held up by customs officials for five hours in spite of my documents indicating that I am an accredited journalist to cover Afcon. I took it in good stride in the name of adhering to the strict security measures in these days of terrorism and when I was given the all-clear, my chauffeur, Abdul, was all smiles to meet me.

Unfortunately, he just could not pronounce my surname even after my several attempts at correcting him; he settled to calling me Bamlanki.

“Your life will not be the same when you go back,” the amiable Abdul warned me in advance as he tucked away my luggage in the trunk.

He also quickly advised me that it is unwise to move around without a bottle of water. But as he drove me to the Amarante Pyramids hotel in Giza, he started smoking stuff I did not understand. Within minutes, he had ‘lit’ up the cab with his smoking.

Strangely, he seemed unperturbed even when I told him I was allergic to smoke, until I started grasping for breath. I later discovered he had a huge stash of cigarettes. This was to be my life in Egypt for the next few days; they smoke all the time and everywhere. At the hotel, I teamed up with other Ugandan journalists Grace Mbabazi, Web Ssebakijje, Aisha Nassanga and Mark Namanya to kick-start a formidable schedule.

While here, I soon realised that several other Ugandans had made the trip to support The Cranes, among them MPs Allan Sewanyana, Odonga Otto and Moses Kasibante and tourism state minister, Godfrey Kiwanda Ssuubi.

Giza is a short distance from Cairo; so, travelling for Uganda’s matches should have been easy but the heavy traffic jam and poor road manners make it a one-hour journey. I am used to the poor driving etiquette of Ugandans, especially the taxis and boda bodas, but believe me, Egyptian drivers are worse.

They are so aggressive and I have witnessed at least five accidents in the short time I have been here. You just don’t cross a road without extra caution. Even when cars get dents, drivers here care less about repairs.

Another disappointing thing is that cab drivers are cheats. They will say they understood the route and place you are going, only to take you around and keep asking others. By the time they get to the destination, they ask for extra money from the initially-agreed cost.

And to think that tipping such a driver is still mandatory! They ask for a tip like they are ordering you. This transport issue means oftentimes I have to get out of using the cab and be at the stadium at least five hours before kick-off, because the security measures are very tight.

Heading to Radisson Blu Hotel where the National team players stay here in Cairo to find out the latest from a meeting that has now taken 3hrs with the sports minister Hon Bakka ,coach Desabre , com Apita & 3 senior players to resolve the stand off #AFCON2019 @observerug pic.twitter.com/Bzx26buRF9

One of the surprise experiences for me and many other Ugandans is the Egyptian time zone and way of life; for instance, dusk sets in at about 8pm and by 5am, the skies are already clear. A stroll through the streets of Cairo paints a lively picture of a diverse society. There are quite a number of bars, top shopping brands, high-end malls an unbeatable love for shisha.

Shisha pots are a common sight to the extent that the air in some places is clouded by smoke. Luckily, there are a number of water points for the public to take water freely. The people here are very receptive and kind, maybe due to Egypt’s history of being a top tourist destination, but the language barrier cuts the conversations short.

My theory is that the hospitality flows with the River Nile all the way from Uganda. Locals even call us for selfies, but women are restricted from talking to foreigners. The mention that I’m a Ugandan triggers the name of Onyango [Dennis], the Ugandan goalkeeper who is a popular figure here.

As for the food, most of the dishes are ‘dry’ with no greens. It seems there are few vegetarians here. The most common food here is Hawawshi, which is meat rolled inside bread and Aish Baladi, a hard rounded bread mixed with water and salt.

I mostly eat chicken shawarma (chicken rolled in a chapatti-like bread or ban), the most common recipe that is relatively low-cost for anyone. So, many of us either take this or go to Crunchy Chicken, which is the equivalent of Chicken Tonight in Kampala.

Ironically, business in Cairo starts at night when the city is at its most active. Locals told me that due to the high temperatures, people prefer to rest during day and come out to shop at night when it is cool. Indeed, I also spend most of my daytime resting at the hotel before swinging into action at night and the earliest I have gone to bed has been 1am.

There was a feeling that all Ugandans in Egypt came to watch The Cranes but when Uganda took on DR Congo, I realised there was a sizeable number of Ugandans who live and work in Egypt.

Aidah Nalubega, a dealer in bales of cloth, told me she has been in Cairo for the past eight years and finds life there to be very good. Asuman Musoke is another Ugandan who operates a restaurant and he told me that Egyptians love Ugandan dishes.

It is almost impossible to exhaust the entertainment joints in Cairo. The pyramids top the list of places to visit here and it was as memorable as it was scary. We had to enter as a group of about 15 and each of us had to prove we were mentally and physically fit.

People with asthma and high blood pressure are discouraged from entering. Once inside, we moved about 400 stairs up to where ancient Egyptian mummies are buried. It is a very beautiful place but also not for the fainthearted; after all, the pyramids, however beautiful, are still burial sites of ancient pharaohs and their kin.

Some parts reminded me of those scary moments in supernatural horror movies. At some points, each of us had to crawl on our bellies to go through an inlet and descending down the pyramid can be a nerve-wracking experience if you fear heights, due to the steepness of the stairs. After almost an hour there, it was as if some weight had been lifted off my back.

Then came the visit to the ancient Coptic church built on the spot where Jesus is said to have spent some of his childhood as his parents fled Herod’s persecution of boys. Here, everything has been preserved so well. It is such a marvel to behold.

Unwinding took us to Pub 28 in Zamalek, which plays a variety of music from across the world. Unfortunately, the DJs did not play any Ugandan music and the closest we came was Diamond Platinumz’s music. I also noted there are a number of prostitutes here who are brave enough to ask whether you can pay $100 for a night.

A boat cruise on the Nile was the clincher, because it explored the hidden beauty of Cairo. The two-hour journey is around the banks of River Nile, where most of Egyptian settlements are concentrated because of the fresh water; the cruise had many on board go wild with amazement.

On board, there was plenty to eat and drink, including booze, while music played in the background. The boat visited several small beaches, where locals spend the night in groups or family outings. It was nonstop entertainment and MP Sewanyana was all over the place to offer free stuff to anyone who cared. These ‘honorables’ know how to have fun.

Being accredited for the tournament allows me access to several restricted zones, including the training camp of The Cranes. Here, players relate freely with fans and officials. When The Cranes defeated DR Congo, players stayed over after the game to mix and mingle with fans in the stands. Taddeo Lwanga, Ronald Mukiibi, Bevis Mugabi, Emma Okwi and Onyango are more outgoing.

Afterwards when the Ugandan contingent met at the hotel, Fufa boss Moses Magogo told everyone to eat and drink on his bill. It turned into a frenzy atmosphere till morning. At the Arab Contractors stadium where The Cranes train from, I have also observed Mukiibi and Mugabi hold a special bond, probably because of the diaspora connection. They even train longer after everyone.

Much as the Ugandan contingent at the tournament is big with several MPs, businessmen and artistes, the degree of pessimism about Uganda’s chances of going deep into the tournament was appalling. My interaction with several Ugandans revealed how lowly they rate The Cranes and many booked tickets to stay only for the group phase.

Now, when it became clear the boys were staying much longer after the draw with Zimbabwe, some started scampering for extra cash to also extend their stay. Of course, the living conditions here mean that I spend at least $80 (about Shs 290,000) a day, most of it on accommodation, cabs and food.

Luckily for me, the sponsorship from The Observer and Nile Special has ensured me a peaceful extension. My Egyptian sojourn has left a lasting impression as Abdul warned, and it is even more remarkable because I was not sure of making the trip until the last minute when Francis Nyende, the Nile Special brand manager, offered me a ticket and accommodation.

Life is about moments like these and the memories of Cairo will stay with me forever.