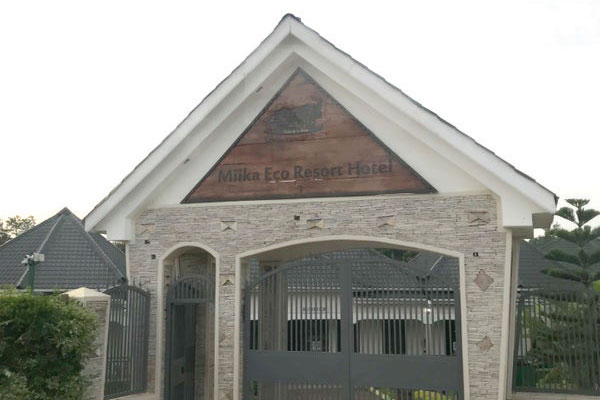 Before 2006, when oil of commercial quantities was discovered in Hoima district [and neighbouring districts], nothing worth mentioning was known about it save for the western district being the seat of the Bunyoro-Kitara kingdom.

But the last 13 years have seen a turnaround not only in the physical infrastructure of the district but also in the lives of the people both for the better and the worse. The pragmatic and well-connected have started reaping the petrodollars even before the first barrel hits the market.

In this legion you have the likes of former long-time ministry of Energy and Mineral Development permanent secretary, Fred Kabagambe-Kaliisa. I was told he is the proud owner of Miika Eco Resort hotel, the 64-room, swankiest hotel in Hoima located on Butiaba-Kaiso-Tonya road, about three kilometres outside Hoima town.

The hotel sits on such a big piece of land that it took me about 10 minutes to walk from one gate to another. The hotel boasts a historical site on its vast grounds, as a bonus to its well-heeled clientele.

It is here that one can access the Katasiiha fort and caves reportedly built by Omukama Kabalega in 1894. To sleep at this three-star hotel, you have to part with anything between $105 (about Shs 380,000) for a deluxe twin room and $200 (about Shs 730,000) for an executive room. Per night.

Kabagambe is also the owner of Albertine Water, the most popular mineral water in the region. I will get back to Miika in a moment, lest I forget the downtrodden; those Frantz Fanon refers to as the Wretched of the Earth in his 1961 book.

The wretched of Hoima’s conditions are reportedly worse off now than before the oil was discovered. They have lost their land, homesteads, gardens and families to rich and powerful speculators going by some of the harrowing stories we heard. But that is a story for another day.

The story for today is my visit to Hoima, Uganda’s oil capital. Ironically, although Hoima has ‘stolen’ the oil show, actually much of the oil that was discovered in the Albertine graben is not in Hoima district. But well, Hoima is the biggest town in Bunyoro sub-region.

Last week, the Petroleum Authority of Uganda invited me and other media colleagues to be part of a ‘Public Hearing’ on the results of the Environment and Social Impact Assessment for the Kingfisher Development Area.

The hearing took place at two different locations that are going to be affected by the oil mining activities such as the pipeline, refinery and airport, among others. The first hearing happened at Kyangwali in the newly created district of Kikuube and the other at Kabaale in Hoima district. We left Kampala on June 18, fifteen minutes shy of 3pm and arrived in Hoima at 6:30pm.

But before we arrived, our phones were jammed with adverts announcing what was in stock for the ‘oil gurus’.

Concerts at clubs such as Club Magic promising us music that soothes the soul, ‘oil queens’ and drinks like we had never seen before. Although in the last 10 years Hoima has seen a significant growth in accommodation facilities, the sheer number of officials from different government organizations that are directly connected to oil including NEMA, ministry of Energy and Uganda Revenue Authority coupled with a coterie of other nongovernment organizations, combined to cause a scarcity of accommodation.

It took moving for about 30 minutes to get where to put up for the next three days we were to spend in Bunyoro. Now, returning to Miika; it is where our MPs and other ‘big’ people in the petroleum sector spent their time. It is them who can afford the $200 per night.

But they were kind; they would invite us to help them clear the buffet that was exclusively prepared for them. On the last day of our stay in the town, we were treated to a party. Forget your typical cocktail party in Kampala where only tiny finger foods are served; here it was a full buffet with everything you can think about.

Those who take alcohol had a choice of all tribes of liquor. Who picked the bill? I have no idea. Away from the town, we visited the Great East African Rift Valley where the China National Offshore Oil Company [Cnooc] has field offices. Cnooc is the developer of the Kingfisher Development Area. The road leading to Cnooc’s office is one of those that have been tarmacked.

Travelling on it descending into the rift valley is breathtaking. As you descend, you actually feel the altitude drop and feel lightheaded similar to when a plane is on its descent. Even the ears feel plugged and uncomfortable, like on an aeroplane.

Looking at the road carved into the edge of the rock, one cannot help but marvel at the engineers. Drive on this stretch is not for the faint-hearted, because a slight mistake will certainly be fatal.

But the view is unforgettable. While sloping downhill, you have a clear view of Lake Albert and its fishing villages miles away. Apart from the rift valley, there are also other tourist attractions in Bunyoro that are eye-catching that if your mission was different from mine, you would not want to miss. Check them out. The town has also become very vibrant with English and Luganda widely spoken now; however, to the chagrin of the locals.