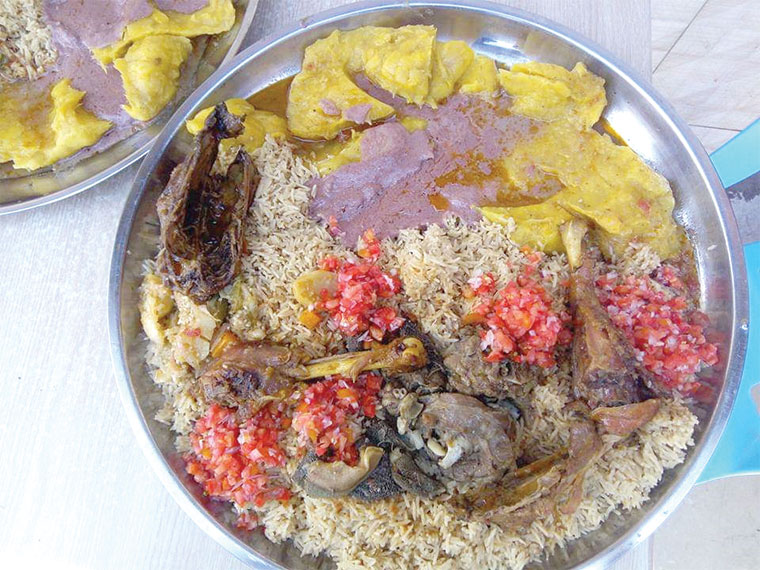 As we concluded an interview with Dr Jose Chameleone last week at his DNA Lounge, he placed an order for two platters of food, insisting that we stay for a late lunch with him and his crew.

There was no hint what kind of platters were on the way. I thought, nyama choma. When the lusaniya arrived – two of them, actually – the Bayuda hit maker welcomed us to wash our hands, because lunch was served. And oh, how it was served!

Each lusaniya (platter) had a big piece of matoke with groundnut sauce, a huge section of goat pilao, a chicken luwombo big enough for five, and kacumbari (a salad of raw tomato and onions).

This was arguably the best goat pilao I had ever tasted. Just the right balance of everything. I did not taste the rest of the food. Too overwhelming.

With four people per platter, I made mental notes to myself as I scooped more rice: I was dipping into one platter with my bare hands with total strangers. Well, that one of the strangers was Chameleone should count for something.

And two, I could not remember a single time I ever ate from a ‘communal’ lusaniya (not counting dry foods such as roast or cake). But the food tasted so good; our hands looked so messy, but I really did not mind.

At the other table where four guys from Chameleone’s entourage were making quick work of the second lusaniya, I was shocked to look over and find that platter empty!

Their boss invited them over to our table where we had prematurely dropped out of the food race. They needed no second signal and demolished the second platter within seconds.

“I am paying Shs 105,000 for both platters [5,000 for delivery]; what would I have spent had I decided to buy everyone here a plate of food?” Chameleone enthused later.

This restaurant on Mengo hill somewhere near Kisenyi is called Zauja’s Lusaniya restaurant, and clearly it has won over the Leone Island crew, who said sometimes they buy the biggest lusaniya of Shs 100,000, when there are more people.

The downside: Zauja’s invests minimally in takeaways. I ordered for a pilao plate a couple of days later and save for the paper bag and tinfoil that hold the food, there are no disposable containers, no cutlery, no serviettes. At least the food stays hot. Just make sure you are in a comfortable location where you can pull your meat off the bones and dip your matoke without being judged.

Also Notice 100K to feed 8 people...divide that and then you can go to your Serena!!! That means a meal was about 12,500 UGX....not bad at all.
Report to administrator