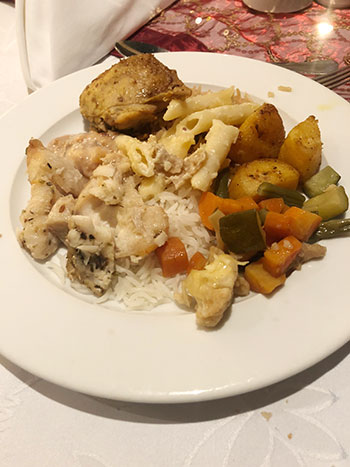 Sheraton Kampala hotel calls it a ‘heartily prepared buffet’. Well, it would be an injustice to your money (Shs 85,000) and your appetite if you turned up for Sheraton’s Ramadan Iftar buffet when you have already eaten.

No wonder it is targeted at fasting Muslims, served from sunset till 11pm. The Observer was recently invited to the dinner at the Victoria restaurant. The place was nearly full with just only about four tables unoccupied.

It was easy to know why; it is ‘eat till you drop’ here and depending on the number of diners, the Shs 85,000 per head is negotiable. From the dried jackfruit, yoghurt, dried sweet bananas, dates, roast ground nuts, tea, juice to the main course and dessert, patrons eat as much as they can stomach.

The waitresses dressed like those Emirates air hostesses are not there to take your order (you can start eating whatever, whenever) but rather to ensure that your comfort and supply chain get no undesired breaks. Perhaps I was the only non-Muslim and lone diner that day – it was couples, families or friends.

I did not know where to start from – tea, fruits or juice? I copied the Muslims: juice first. There were several choices, but I opted for the passion fruit because of its aroma. For the soups, I went for the creamy lentil soup as opposed to the beef soup. By then I was nearly full but still had a buffet to taste.

The Oum Ali pudding from what I gathered is an Egyptian dessert – it is full of sweet melted chocolates. There was also the Moroccan lamb tangine, but I was not about to make my lamb-eating debut.

The rice choices included steamed white rice and Saidiya rice (mostly eaten in Egypt and Lebanon). The Saidiya rice tasted like an upgrade from the Ugandan pilao.

My favourite was the well-seasoned roasted potatoes and the white oriental fish. They were well balanced between crunchy and soft. I failed to tell what type of fish it was.  The oil-free roasted vegetables were said to have had cheese in there, but I could not taste it. Of course there was chicken (grilled), which I did not even bother to try as I was by now too satisfied.