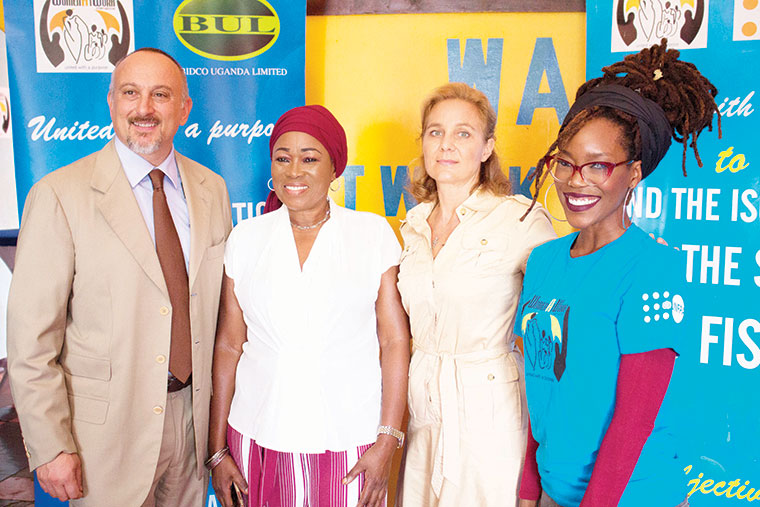 When Halima Namakula founded the Women at Work International (WAWI) in 2004, she had a passion for improving women’s health and well-being. An entrepreneur, singer and humanitarian, she was determined to support vulnerable women, youth, widows and orphans, writes Yudaya Nangonzi.

Through projects such as HIV/Aids awareness, family planning and vocational education, she has touched lives. In 2012, Namakula decided to include obstetric fistula awareness, now WAWI’s major focus, on the long list of its programmes.

According to www.fistulafoundation.org, an obstetric fistula is a hole between the vagina and rectum or bladder that is caused by prolonged obstructed labour, leaving a woman incontinent of urine or faeces or both.

The World Health Organisation (WHO) indicates that obstructed labour occurs in an estimated five per cent of live births and accounts for eight per cent of maternal deaths. WHO adds that adolescent girls are particularly susceptible to obstructed labour because their pelvises are not fully developed.

Namakula says this narrative can be changed if the public is sensitised. “In field visits, women and teenage mothers think they are cursed or bewitched yet fistula is treatable,” Namakula says.

“People ought to understand that this is not a disease you catch from someone but a silent killer condition at childbirth that is bothering the nation.”

WAWI not only engage in awareness; they mobilise persons living with the fistula and refer them for free surgeries in hospitals. Namakula’s fight against fistula recently attracted the Italian embassy Kampala through a fashion show contest held at Sheraton hotel in March 2019.

Last week, the Italian ambassador to Uganda, Domenico Fornara, and his wife Anna Muscetta handed over proceeds of the event with a cheque worth Shs 10.6m to WAWI staff at their offices along Mawanda road in Kamwokya.

This is thanks to renowned fashion designer and WAWI goodwill ambassador, Stella Atal, who sold the idea to the ambassador’s wife. The embassy used the event to expose young talented designers but also fundraise for a good cause; ending fistula.

Having served in Uganda for four years and leaving in the next two months, Muscetta wanted the embassy to give back to the country. A medical doctor by profession and fashion enthusiast, she felt a fashion contest would be a better fundraising drive.

“As a woman and a mother of two, it’s unacceptable that such things like fistula exist among fellow women. We know this condition can be prevented, treated and nobody should ever undergo such trying moments,” Muscetta says.

“When you listen to stories that women were left for almost two days in labour, you shed a tear. We can’t accept it!” Muscetta, who has interacted with some survivors, says no woman should suffer from fistula, given the enormous stigma associated with it.

As the outgoing president of the Diplomatic Spouses Association in Uganda, she pledged to extend more support to survivors and victims through WAWI. “Normally, the association raises money and supports good causes. Since I am leaving, I can’t influence their decisions but I will interest them in extending more support to fistula,” she said.

“In the next five or ten years, there should be zero fistula in Uganda. It’s treatable and preventable.” Muscetta commended Namakula for her openness in sensitisation, indicating that “fistula victims leak, stink and nobody wants to live with them but it is not their fault.”

Ambassador Fornara reiterated that zero fistulas is feasible. “Unfortunately, other diseases can remain on earth but fistula can be eliminated. The government needs to invest in health care to allow every woman deliver from a hospital or health centre that has basic facilities in order to treat such conditions that happen during delivery,” Fornara told The Observer.

He added: “Women must be supported because they are in more fragile conditions. They are engines of development and this has been proven by empiric facts that if you invest in development cooperation targeting women, you get much higher results.” With men’s involvement, Fornara said more fistula victims will be empowered and not be ashamed of their condition.

In a bid to strength the fistula fight, Namakula said the funds will be used to realise their plan of setting up fistula dropping centres across the country. Three districts; Jinja, Kaliro and Kasese have already offered free space for construction. The centres will be accessed by teen mothers and fistula survivors to share experiences, counseling, give testimonies and inspire other mothers.

“The funding from the embassy is now an eye-opener to outsource more funds and construct as many fistula centres in districts. For authorities with free land, they should approach us to help more women,” she said.

Singer Rachael Kiwanuka alias Rachael K, the WAWI head of social media and sensitisation, said the centers will make women feel like “fistula is not the end of it all. “As a musician, we shall use edutainment and encourage other musicians to join the fight to deliver our message,” Kiwanuka, a daughter to Namakula, said.

This year, WAWI’s annual fistula walk will be held in Bwaise, a Kampala suburb on May 18 and later join national festivities to mark the International day to End Obstetric Fistula in Rukungiri district on May 23.