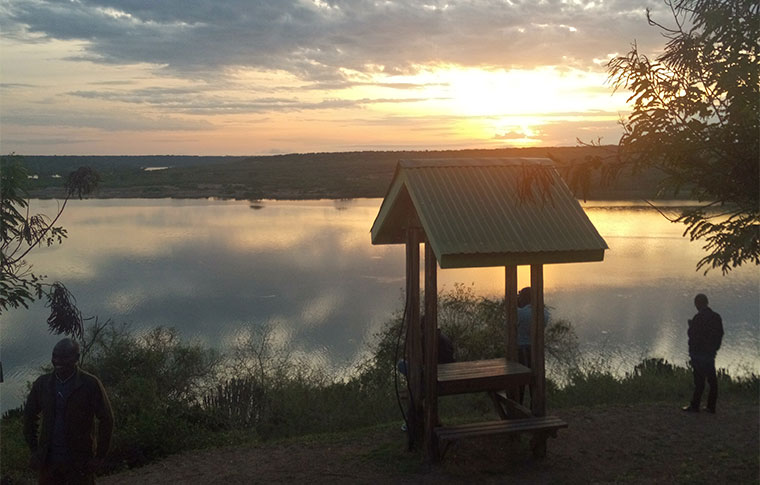 Do you want to see giant elephants weighing up to about 10 tonnes? Have you ever watched lions sharing a kill; not on National Geographic channels, but live? What about tens of hippos and crocodiles showcasing their swimming prowess?

Is it birds you are interested in or the buffaloes?  The place to visit is Queen Elizabeth national park in the western Uganda districts of Rubirizi, Kasese, Kamwenge, Mitooma, Ibanda, Rukungiri and Kanungu. The park has been in the news recently for all the bad reasons.

An American tourist Sue Kimberly Endicott and her tour guide Jean Paul Mirenge were earlier last month abducted, transferred to the restless Democratic Republic of the Congo for a $500,000 ransom.

It is said about $30,000 was paid before the duo was released. Uganda Wildlife Authority, in a bid to reassure the public that Queen Elizabeth, Uganda’s second largest park in after Murchison Falls, is safe to visit, took a group of senior journalists to the park last week.

The park is very rich in biodiversity, boasting of 311 animal species. It is also home to over 600 bird species. Unlike other national parks, Queen Elizabeth is shared between wildlife and people. It has 11 fishing villages and other settlements along the main roads where people stay.

This, according to Bashir Hangi, the communication manager at UWA, has presented them with many challenges, including cases of the two groups of inhabitants killing each other.

But away from the problems UWA is facing, the park is truly the medley of wonders like its slogan goes. The moment you enter the park, you begin to appreciate that this is not just a slogan, but the actual thing.

Like many treasures, Queen Elizabeth national park is tucked away in the interior of Uganda that, if you are the type that does not want to make long road journeys, you would not want to go there.

But for excursionists, it is one of the best destinations. You can access it using the Kampala-Masaka –Mbarara road or the Kampala-Fort Portal-Kasese road. Depending on the traffic in Kampala, you will normally need anything between six and eight hours to arrive at the park.

We set off at nine o’clock in the morning and arrived at 7:30pm at the main gate leading to Mweya Safari Lodge. It would have taken less time were it not for some road glitches and the construction work on the Bushenyi-Rubirizi road that would see our UWA tour bus stop several times.

Along the main road through the park, giants of elephants stand. I have seen elephants in Murchison Falls, Kidepo and Kibale national parks, but these elephants in Queen Elizabeth seem to be of another breed. Some very dark, some a pale grey, but with one thing in common; they are extremely huge.

Robert Adaruku, our ranger guide, told us that some of the lone elephants we saw were old males that normally leave to give room to younger males to take over as the minders of the herd.

“They normally don’t compete for leadership like we see in other mammals,” Adaruku says. We were booked into the UWA accommodations not far away from the swanky Mweya Safari lodge.

Although these self-contained rooms named after animals are nothing compared to Mweya, they are still decent enough to allow for great experience. They are also budget-friendly at Shs 80,000 a night. After a long journey and checking into our rooms, we were treated to a sumptuous dinner prepared by the UWA diner that, unlike some parks I have been to, is very active throughout the day and night.

It is at the diner that they took us through the dos and don’ts while in the park. Ronald Tindyebwa, the warden in charge of tourism, warned us not to get too familiar with the animals even when they express love.

“Keep a distance, they remain wild animals and anything can happen. It’s us who invaded their territory,” he said.

In the compound, warthogs, waterbucks, Uganda kobs and hippos could be seen moving about. At night, we were also advised to move in groups and with flashlights to scare away predators. On the first night as I moved to my room, my flashlight landed on a pair of glowing eyes before their mysterious owner sprinted away and let me access my door.

Usually when I travel, I find it hard to sleep in a new bed; it was not the case this time, thanks to the long day. I was only woken up by my alarm at 4:30am, which turned out to be a good thing. Outside, it was a cacophony of different animal yappings, roars, wailing and shrilling.

At daybreak, after breakfast, we made it to Kasenyi, the den of the lions. Tindyebwa told us more than 95 per cent of the visitors to the park reach this area because there are 95 per cent chances of seeing the lions here.

Indeed, we were lucky to find the Linnet pride of seven individuals enjoying their morning kill – a warthog. This particular pride is interesting because it has only one female; the rest are youthful cubs yet to separate from their mother.

The lioness looks after her cubs and three others left behind by her sister who was part of the pride of seven that was last year poisoned by locals. Apart from Linnet, there is also the Bridget pride, Nick pride and Sankara pride.

These lions are easy to locate, because at least one in each pride has a satellite chip embedded in bangles around their necks. From watching the lions, we proceeded to the antelope mating ground, another interesting tale.

Uganda kobs that fall under the antelope family are in their thousands in this park. But what is interesting is that whenever you find a herd of them, you would hardly find a male. The males, identified by horns, rarely move unless they are still young. They are always stationed in one place guarding their territories.

The bigger the territory one controls, the more the female kobs will want to mate with that particular kob because of its superiority, hence having better genes for the offspring.

The highlight of the tour was a boat cruise on the Kazinga channel that connects lakes Edward and George. We made the trip on a double-decker boat on the crocodile and hippo-infested waters.

The trip that started near the park’s main gate and ended at Lake Edward lasted two hours. We then headed to hotspots where elephants stray out from the park to raid people’s gardens.

Edward Asalo, the Queen Elizabeth conservation area manager, said they have a Shs 1bn budget to erect a 10km electric fence to ward off problematic animals. The trip ended with a barbeque in the evening, an occasion which Asalo used to reassure the public that the Endicott incident was an isolated case that should not make anyone cancel their trip to Uganda.

It was reassuring to find scores of foreign tourists enjoying themselves in the park, regardless the unfortunate incident.