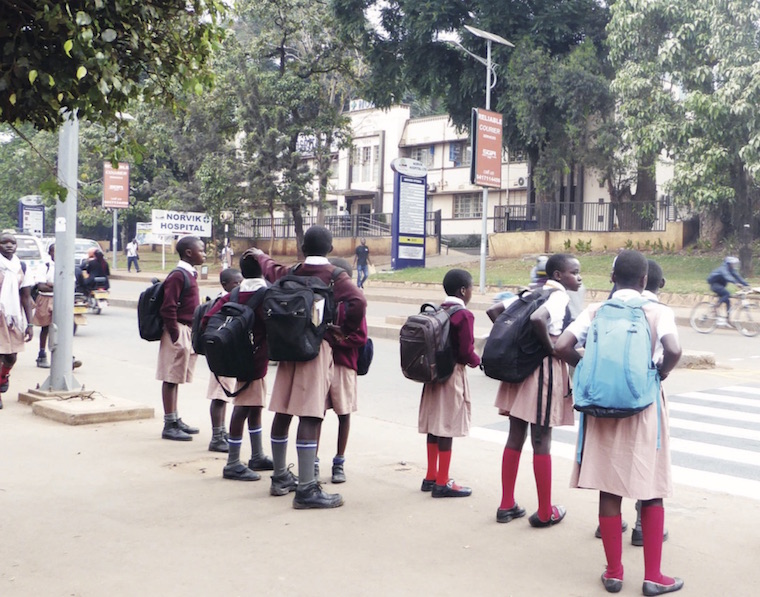 Up until last year, research showed that at least 400 schoolchildren used to die annually in road fatalities in Uganda.

However, a joint effort by a team of researchers, Makerere University and KCCA, has developed a creative way to awaken pupils through poetic learning, something that has greatly succeeded at Buganda Road and Bat Valley primary schools before it is rolled out countrywide, writes ALON MWESIGWA.

At Bat Valley primary school, I’m welcomed into a primary one class with lyrical chants of

Reciting from the front before fellow pupils, Hazel Ogwang, 6; Otim Mongo, 7; and Sharom Apenyo, 7, spread their arms – to display zigzag signals of a road. Ogwang blinks at classmates, Mongo looks down to his feet movement while Apenyo flashes a bright grin – all full of pureness and ambition.

But their innocence and dreams risk being cut short in a country where 400 schoolchildren die in road accidents on their way to and from school annually in Uganda, according to official statistics. This means more than one child dies daily or 33 children die per month on Ugandan roads on their way to school.

The World Health Organisation says road traffic injuries are the leading cause of death for children and young adults aged five to 29 years. The musical and central rhyme in the poem is appealing to pupils’ ear but also can help them remember the road safety message there.

This was part of an intervention that ran for much of 2018, where researchers from Stockholm Environment Institute (SEI), Makerere University and Kampala Capital City Authority engaged creative artists to help pupils from two public schools – Buganda Road primary school and Bat Valley primary school – to turn them into safety champions in their schools.

This was part of the crusade to help the United Nations SDGs agenda to reduce road fatalities to the lowest level by 2030. The British Academy-supported project sought innovations for inclusive and sustainable transport where city infrastructure planners build people-friendly roads. The researchers engaged 100 pupils aged between five and 10 years from both schools – the most vulnerable group of road users.

According to Kampala team leader Amanda Ngabirano, the school children were coached to be aware of safety choices and talk about road safety at school and at home.

At both schools, I observed pupils being led through creative art, storytelling, road simulations, and theatre acting with messages that speak to road safety.

At Buganda Road, sounds were played and pupils asked whether they could notice an ambulance siren and other vehicles. Cartoon sketches of pupils walking on the road walkway and those of pupils using zebra crossing were given to children to identify safe spaces to walk at or play from.

Short skits of pupils safely crossing roads were acted at school and they ask their friends not to pinch them while on the road. Hero characters were used to show pupils that the people they love, for instance film character Iron man, walk on the pavement and does not play in the road.

The researchers worked on assumption that children remember more when they are engaged and participate in the exercise. The children are prone to accidents because they are easily distracted and act on impulse; they are young and love to play and sometimes play around or in the road.

They are also so young; they are at times let to move alone in areas where there is dangerous traffic. At times, peer pressure from other children pushes them to make risky choices, such as running across a road.

Researchers worked with Buganda Road and Bat Valley schools because of the nature of pupils – mostly from low income households as well as the open exposure to busy roads.

At Bat Valley, some children were family heads, others have to vend merchandise before going to schools while a handful had their parents in prison, according to Milly Naava, a teacher.

“Someone in that state can easily be a victim of speeding motorists,” she said.

The schools run on thin resources and at times can hardly afford to hire someone to help their pupils cross. At the head teacher’s office at Bat Valley hangs a detail of the resources they have been provided with for third term – just Shs 2,800,000 ($300) – to run a school of over 400 pupils for three months.

Buganda Road is better off, managing to hire a lollipop man to help children cross. As way to cap the engagements with the school children, researchers painted a zebra crossing above Bat Valley school, a spot used by children from both schools.

Damalie Kibirige, a teacher at Buganda Road, said they hoped road accidents would reduce and said the researchers’ intervention was handy to their pupils. The researchers piloted 3D zebra crossing which creates an illusion that forces drivers to slow down – hoping they can be adopted in Kampala.

Dr Steve Cinderby, project lead researcher, said they chose schools because of the wider impact that intervention would have. The project, he said, explored how city planners can include vulnerable populations in their infrastructure planning to make it inclusive. There is hope the method of engagement can be spread to other schools.

When I visited the schools this term, Apenyo and Mongo were still leading the crusade at Bat Valley while Ogwang has moved to a new school, carrying the same message in the hope that 400 innocent pupils can be saved annually. At Buganda Road, pupils are bubbly, looking forward to safer nurturing of their dreams without being cut short in fatalities.

As I left the schools, I was convinced the poetic intervention will surely save lives; but on a wider scale, motorists’ behaviour and friendly infrastructure will have a lasting impact.