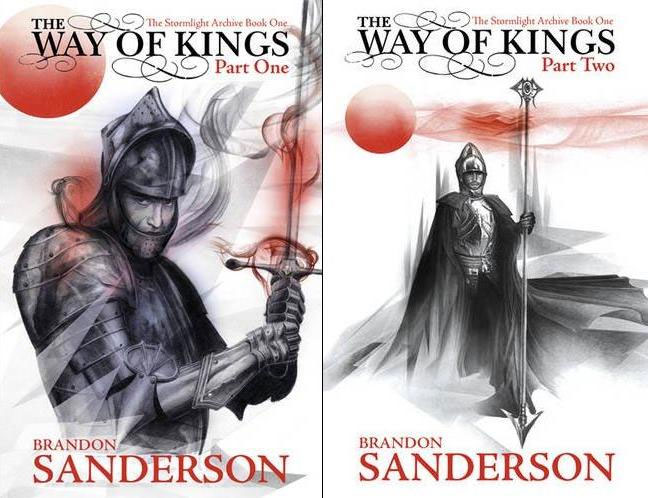 I have said this before: Brandon Sanderson is the best fantasy author of the 21st century because he writes stories that appeal to both enthusiasts of the genre and readers that don’t give a hoot about fantasy.

The Way of Kings takes place in the alien world of Roshar. A long time ago, a special sect of knights was chosen to protect the world from an enemy only known as the Desolation. Gifted with mystical swords and powerful suits of armour, these knights executed their duties with honour and excellence, for a time at least.

But then Roshar’s protectors suddenly abandoned their roles. They cast their arms aside and faded into history, leaving the world to face untold destruction. The Way of Kings picks up millennia in the future.

Roshar, now a cruel world of stone, is ravaged by storms. A disparate series of kingdoms have taken up the ancient weapons of Roshar’s guardian knights and now wage a constant war for conquest.

Three heroes take center stage: Kaladin, once an innocent, bright-eyed boy who worshiped the aristocratic nobles of his land, now a slave; Kaladin will either rise to become Roshar’s brightest star or fade into obscurity, having surrendered to the alluring call of death and despair.

And then there’s Shallan, a peerless scholar with a tragic past and wicked intentions, whose thirst for knowledge will drag her kicking and screaming into realms of magic and wonder.

Lastly, but certainly not least, is Dalinar, the man chosen by God to unite the kingdoms under a banner of honour and justice, and to lead them in a conflict that will shape his world, but whose past misdeeds as the world’s most wanton murderer have cast him in a dubious light in the eyes of those he hopes to convert to his cause.

The Way of Kings is an amazing novel; a massive 1000-page tome that spins the lives of a multitude of characters into a cohesive tale of love, loss, and sacrifice. Hardcore fans of the fantasy genre will love the alien world of Roshar, the bizarre flora and fauna, and the ancient lore that Sanderson weaves.

Curious readers, individuals simply looking for a great time, will appreciate Sanderson’s distinct action as heroes and villains, gods and monsters clash in a reality-defying maelstrom of mythical, impossibly large swords, mind-bending manifestations of the supernatural and a magical system that is as inventive as it is engaging.

But how about those high-brow readers who could care less about flying knights and armor-clad soldiers? Well, that is the magic of Brandon Sanderson. At the end of the day, The Way of Kings is such a fun read.

It does not matter what you think of the fantasy genre; Sanderson stands out because he tells great stories, and The Way of Kings is a great story. So, even if magical swords are not your cup of tea, I guarantee you will, at the very least, find yourself drawn to the plight of Sanderson’s very human characters.