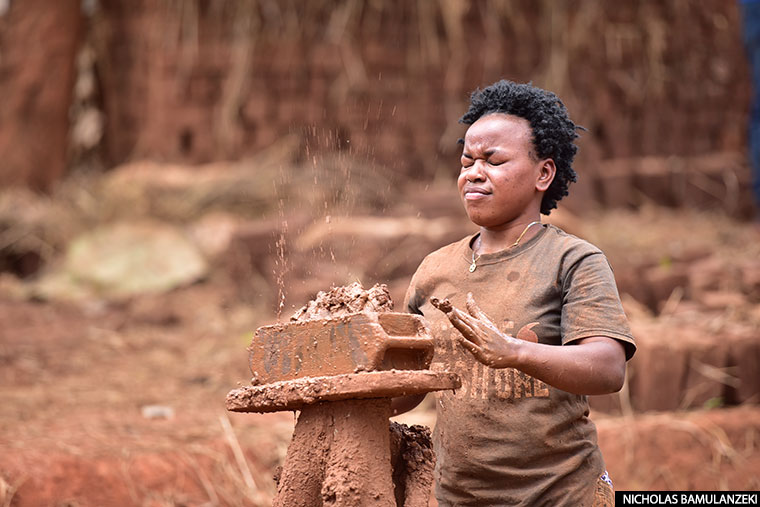 Sharon Mbabazi making bricks at her home in Masooli, Gayaza

A few days ago, SHARON MBABAZI became an overnight sensation after she made a simple Facebook post showcasing her brickmaking skills.

The image went viral and generated public interest and won the 23-year-old a lot of admiration for her sheer resolve and determination. Nicholas Bamulanzeki tracked her down in Masooli, Nangabo sub-county, Wakiso district.

After branching off Gayaza road, you have to weave through several murram roads to reach Mbabazi, whom I find doing her thing – brickmaking.

Many societies regard brickmaking as an old-fashioned menial activity for energetic, uneducated men that have lost hope in getting ‘serious’ jobs. It is also dirty and physically demanding, seeing as one’s major raw material is mud.

So, finding a woman making bricks is quite remarkable, more so when she takes it as a source of her livelihood. It is 11am and in the scorching 28-degree-plus temperatures, Mbabazi goes about her work with unrestrained enthusiasm.

She is so consumed she is even oblivious of my presence yet she had just directed me a few minutes earlier. Mbabazi is barefooted and her clothes are covered with mud, but she has somehow managed to protect her hair.

I observe a buzz of activity; Mbabazi sturdily works around a heap of stabilized mud from which she cuts off pieces with her hands, adds a little water and places the mound in a wooden frame to make a brick.

It is quite a sight to see her do this energy-sapping activity. Yet she does it flawlessly and expertly. She is not that physically buffed but I notice she has big biceps and a calf of an athlete. The paint on her toenails is faded, perhaps from all the kneading of the mud, done exclusively by stomping through the mound.

In-between, she sings out a few lyrics of Paul Kafeero’s Bulandina playing from the small radio she placed nearby. She even shakes a bit when Beera Nange by Sheebah plays. Mbabazi makes the work seem so easy one could think she is just playacting.

One, two, three…she pops outs the fresh bricks and lines them up in a row for drying. She seems to be on a mission to clear the heap within minutes.

It is at this point that I introduce myself.

“You are welcome. This is my daily routine for at least four good hours,” Mbabazi says with a wide grin. “Today I’ve made about 400 bricks so far, but I wanted to make 1,000.” 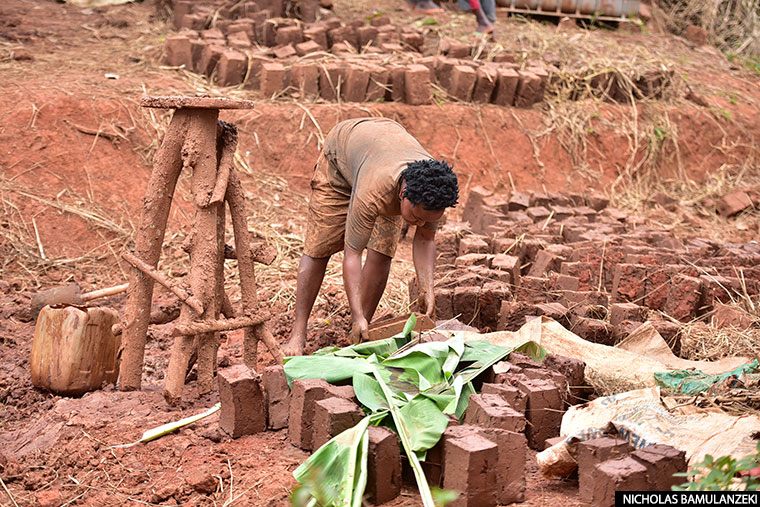 Welcome to the life of Mbabazi, a jolly young woman who continues to confound society. A few metres away, I notice two young lads.

One by one they pick the earlier dried bricks and pass them over in a human conveyor belt up to an ageing man, who then loads the bricks artfully onto an already huge heap of bricks. It is clear they are preparing a kiln, commonly known as tanuulu, where the bricks will be baked to perfection.

I later get to learn that this is a family activity involving Mbabazi’s brothers and her dad.

Soon, Mbabazi and company debate Liverpool’s solid start to the Premier League season and whether they can win the tournament. They hold different views and also argue whether Roman Reigns rightly defeated Baron Corbin in WWE the night before.

After about 40 minutes, Mbabazi takes a break, having cleared the heap of mud. She offers me a quick snack of black tea and a piece of boiled sweet potato.

Who am I to turn it down?

“This is my daily workstation and later in the afternoon I will be going for lectures,” she says. Lectures? I wonder whether I heard right.

She senses my doubts and opens up to the fact that she is a third-year Mass Communication student at Muteesa I Royal University in Mengo.

“This is what pays my tuition and I’m not shy about it,” she says. “I’ve been in this trade for three years now and I don’t regret one bit.”

When all is said and done, she will clean up well and join her manicured classmates in class, with no trace of her earlier hustle.

How she ended up here?

The death of her mother in 2005 opened Mbabazi’s life up to the harsh realities of poverty. The third-born in a family of five, she recalls being in P2 at the time and her father warned them to brace for a tough life.

“I had a troubled school life; I was always being sent home for lack of fees or scholastic materials,” she says.

Her elder siblings dropped out of school but Mbabazi managed to complete A-level in 2014. 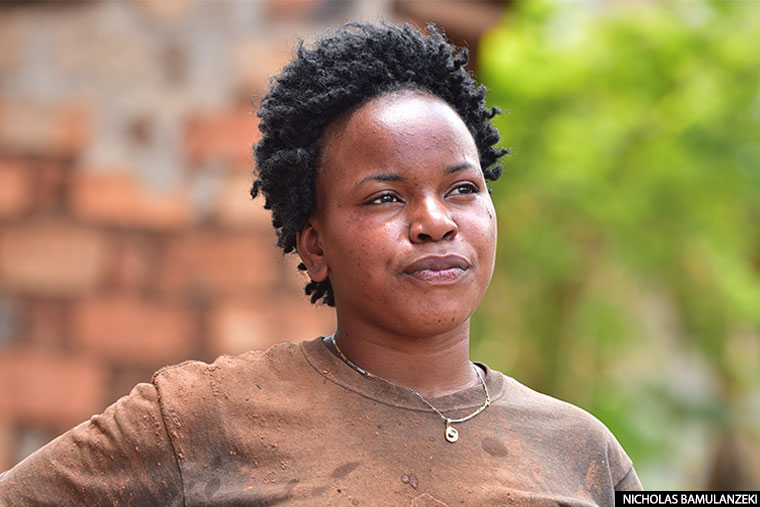 “I realized that my dad didn’t earn much to keep all of us [including two younger siblings] in school and I stayed at home for two years until a well-wisher offered to pay half my tuition if I got a placement at university,” she says. “That opportunity meant I had to find a way of topping up the other half.”

It was at that point that her dad, a brickmaker throughout his life, introduced her to the activity. Mbabazi started with the simple tasks such as fetching water and sieving the soil before settling into the most demanding process of kneading.

“He [dad] had become weary and it wasn’t easy for me to adapt, but I was determined not to miss the opportunity,” she says. “Many passersby wondered whether, as a female, I was in the right frame of mind to do brickmaking, but I ignored that.”

Interestingly, news of her illustrious career took many of her colleagues at university by surprise.

“I had not told anyone at university before because I wasn’t sure how they would perceive me and many thought I come from a well-to-do family,” she says. “But they were shocked to learn about my other life.”

Mbabazi is hoping to prepare a kiln of 10,000 bricks within the next one week and admits that in a year she builds about five kilns of 10,000 bricks each, which she sells for between Shs 1.3m and Shs 1.5m, depending on the season.

That roughly means she can make as much as Shs 7m annually with minimal costs given that the activity takes place on land owned by the family.

“There is not so much business in the rainy season because it disrupts us,” she says. “But I enjoy kasana [sunshine]…because you are assured of making high-quality bricks and I don’t have to worry about moving long distances looking for dry grass to cover bricks.”

“Some people find it a taboo for a woman to be a brickmaker,” she says. “Many customers actually doubt when I tell them I’m the owner of the bricks.”

Meanwhile, Mbabazi’s life is not just about the bricks. She supplements her income by doing videography and photography on weekends.

“I have a friend who has a studio and always gets business to cover weddings and parties; so, I earn some good money to cover for my transport and other needs,” she says.

Mbabazi has set her eyes on becoming a radio or television presenter when she completes university but has no plans of quitting brickmaking.

“I want to be able to practice journalism where I can inspire people directly, but I cannot quit brickmaking because it educated me right from primary school,” she says.

Looking ahead, Mbabazi says society needs to move away from the stereotype of the macho male brickmaker and instead appreciate every person who does any job well.

“If some women didn’t sit home and wait to be pampered, this world would be a better place for everyone,” she says. “I’m proud to do what I do because I know how far it has brought me and where I’m headed.” 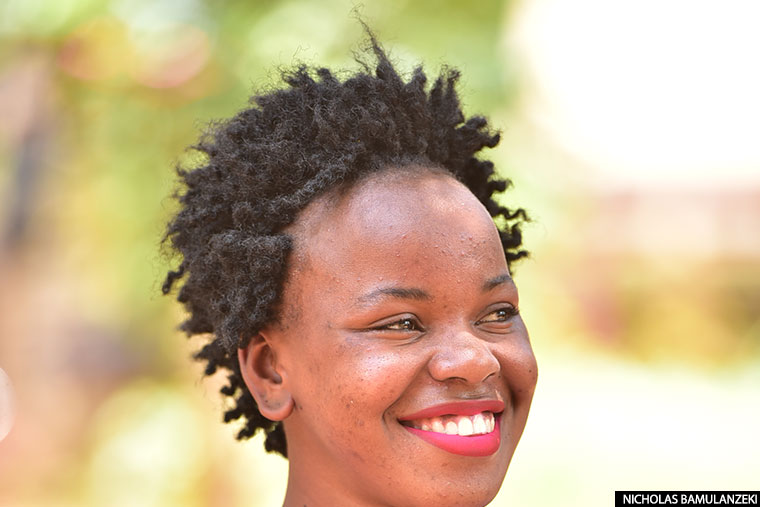 Steven Semasaka, Mbabazi’s father, says he settled in Masooli from Kisoro more than 40 years ago after buying a plot of land there. He did several menial jobs but soon specialized in brickmaking.

He says Mbabazi embodies attributes every woman should have by making the best of any opportunity.

“She surprised me too when she decided to take up brickmaking well-knowing it is a ‘man’s job’,” he says. “I’m happy for her that she is now the breadwinner and she has brought us positive attention.”

Mbabazi admits she has never been to Kisoro and, interestingly, speaks only Luganda and English.

“We are Bafumbira but I cannot speak a word because this is the only home I’ve known all my life,” she says.

Meanwhile, Mbabazi’s unusual timetable and skills allow her little time for romance; she is single but insists she is also contented and not in a rush to meet mister right.

Go girl, don't wait for any man to give you money from their rear pocket.

Show them that you too can wear trousers anywhere, anytime. BRAVO!
Report to administrator