Most writers do it for money, but true still is that others just love to tell stories. Beatrice Lamwaka falls among the latter category. When she set out to write, her intention was simple: telling stories to impact lives, as she reveals to Abubaker Mayemba.

For her efforts, Lamwaka has been shortlisted in various awards like the Caine Prize for African writing and was a finalist in the PEN/Studzinski Literary award in 2009, among others.

Nationally, Lamwaka has won the Young Achievers Award gong in the category of arts. She has also been honored by various institutions for her contribution to literature.

While growing up in Alokolum village in Gulu district, Lamwaka was always fascinated by the books her father shelved in the sitting room. These books, she says, initiated her love for words.

Every day after school or during her free time on weekends, she would get a book and ‘get lost’ in it. Her attitude towards reading delighted her father, the late Zakeo Ojara.

In secondary school, Lamwaka was introduced to works of legendary Okot p’Bitek, and later fell in love his Song of Lawino. Since then, Lamwaka swore that if she was to ever write, she would also employ the style of using simple language with a touch of originality.

Indeed, her works can be understood by anyone. The setting and characters of her writings depict the identity of people in northern Uganda.

“Okot p’Bitek inspired me; I read the Song of Lawino version in Acholi which inspired me. I find the poem more powerful in Acholi than in English. I’m also inspired by Chimamanda Ngozi Adichie because she’s a young African writer who makes us believe it’s possible to succeed as writers,” Lamwaka says.

Growing up in Northern Uganda in the 1990s meant seeing the effects of the Lord Resistance Army (LRA) war first-hand.

She clearly remembers LRA rebels coming to their home and asking medicine from Mzee Ojara, but later changed and took it forcefully.

It is from such memories that Lamwaka gets inspiration to write. In fact, most of her works narrate the effects of the war that lasted for years. But still, works like Queen of Tobacco, though more fictional, are derived from other people’s experiences and ideas from news segments.

Just like most writers, Lamwaka didn’t set out to become what she is. After her A-level at Uganda Martyrs secondary school, Namugongo, she enrolled for a Bachelor of Arts with Education from Makerere University.

In her third year at Makerere University, she joined Femrite, an organisation aimed at developing and promoting women writers. In 1998, as Lamwaka was about to finalize her university education.

It was then that colleagues advised her to join the Uganda Women Writers Association Femrite because she was a budding writer. She heeded their advice, joined the association and 19 years later, Lamwaka has no regrets.

She observes that Femrite brought out the best in her, and that it is here that she met colleagues who have been guiding her. Her colleagues at Femrite always challenged her, and within two years, Vengeance of the Gods, her first short story, was published in the anthology Words from a Granary. This opened her doors wider.

“I joined young people who were trying to write. Our dreams got bigger because we wanted to be recognised for our writing. We started submiting to journals, and got both rejections and acceptances but celebrated both because it was progress,” she reminisces.

With close to 20 years in the trade, the name Lamwaka has become synonymous with anthology. The British Council adopted her Queen of Tobacco. Butterfly Dreams was short-listed for the Caine Prize and later published in the same award’s anthologies.

Other anthologies like Words from a Granary, World of Our Own, New Writing from Africa 2009, Summoning the Rains and Farming Ashes have Lamwaka’s short stories. To circulate her writings domestically, she has compiled her works in Butterfly Dreams and Other Stories.

Currently, Lamwaka is working on a novel, although it is a challenge since she is used to writing shorter stories. Though she finds it hard to pick her favourite works, she names Queen of Tobacco as one of her masterpieces. Despite writing it in one day, she says, it still sold out.

Queen of Tobacco has a big reading in the United States where they read it to audiences, and different versions have been made out of it. Anena’s Victory is a source of pride to Lamwaka because the ministry of Education and Sports adopted and distributed it to schools. The 39-year-old writer dedicates Butterfly Dreams to her deceased mother, Rosa Langoma.

Danson Kahyana, one of Lamwaka’s ardent readers, describes her as a powerful writer who succeeds at bringing out issues other writers are afraid of. 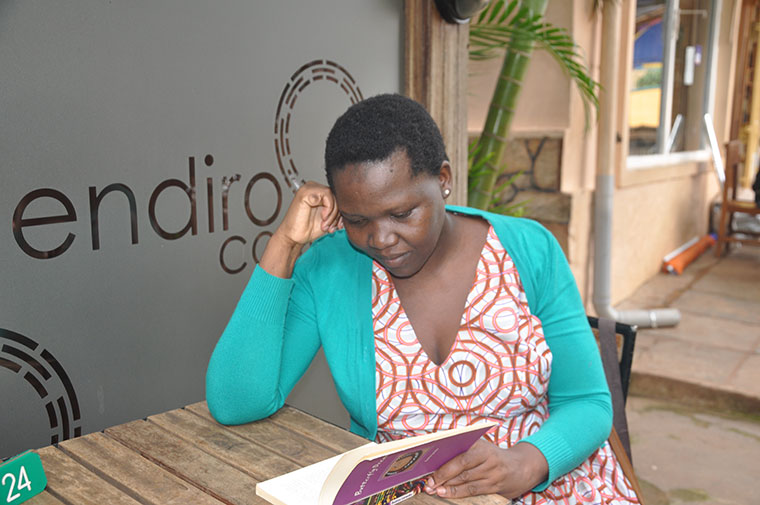 For example, he says that in Queer Identity, Lamwaka paints a picture of a man being more than what he wears but his actions.

“Lamwaka is a leading short story writer because she has the power to capture issues, and uses powerful language,” he says. “In stories like Butterfly Dreams, she has been able to tell stories of the trauma that still haunts the people in Northern Uganda.”

It’s the impact of her works that gives Lamwaka the energy to continue writing. She stresses that the fact that her works are being read and taught in classes satisfies her. Lamwaka has no regrets because her stories impact society.

“I would have regretted if I did something else, but writing has done exactly what I wanted to do. If I ever had an office job, I don’t think it would have given me that satisfaction. After writing a story, I am so happy and sometimes I celebrate in my own way; like I go buy a pair of shoes,” she says.

Lamwaka is also into poetry; some of her poems have been published in Butterfly Dreams. During her free time, she usually teaches creative writing to aspiring writers, whom she frequently tells: “If you are interested in writing, you must read; and if you want to write, write.”