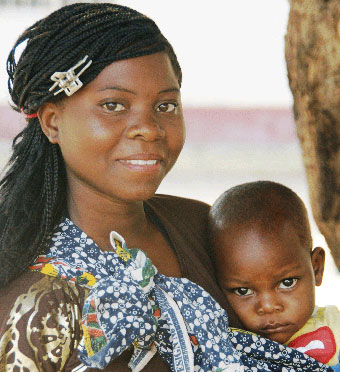 Lauren Akampurira, 24, a resident of Mutungo Biina in Nakawa division of Kampala, was very excited when she got pregnant with her first child.

Little did she know this excitement would turn out to be her most terrible nightmare. Looking at her, you realize something is wrong but can’t tell what it is. Her legs are disproportionately bigger than her other body parts. Looking in her eyes, you see somebody struggling to get to terms with oneself.

She looks pale, never mind that she is light-skinned; clearly something is haunting her. When she opens up, you can’t help but feel sorry for her and her equally young husband, Obed Akampurira. More than a month ago, the couple lost their only daughter; she was only nine days old.

Lauren says four months into her pregnancy, her legs started swelling; she ran to the clinic she normally went to for her antenatal care and the nurse told her there was no problem.

“The baby is just heavy,” the nurse assured her.

Coupled with villagers who ‘prophesied’ she could be carrying twins, she was comforted and went on doing her normal  business. But her husband was not quieted.

“I would ask myself, which normal swelling is this? What shape will she be after the nine months?” Obed says.

As Lauren was comforted, the strange swelling was not deterred. It had now spread to other body parts; the hands, face, thighs, every part was now twice or thrice its normal size.

“I wasn’t feeling any pain,” she says.

Notwithstanding, a now scared Obed rushed her to Naguru hospital where she was told she had a lot of fluids in her body.

“They diagnosed me with preeclampsia and said they had to remove the baby if I were to survive,” Lauren says with a heavy heart.

She was then admitted to Mulago hospital – Kawempe, where she was induced for early delivery. This was six months into the pregnancy. With the baby out, her body slowly started returning to normal with aid of medication.

The preeclampsia also damaged her kidney; the doctors are still assessing the extent.

What is this Preeclampsia?

Preeclampsia is a multi-system progressive disorder characterized by a new onset of hypertension and proteinuria. It normally happens in the last half of the pregnancy.

According to Dr Annet Nakimuli, a gynecologist/obstetrician at Mulago hospital, the cause of preeclampsia is yet to be known.

“It remains unacceptably high and it is one of the five biggest causes of child and maternal mortality and morbidity,” Nakimuli says.

She attributes the lack of knowledge about the disease that she says has been around for many years, to leaving delivery and pregnancy issues to midwives whose sophistication in research is negligible, if any.

Nakimuli says of the more than 100 deliveries at Mulago, at least four women suffer from preeclampsia.

“The best way to deal with the disease is to prevent it at its early stages but most women don’t come to hospital because they have no pain. They only come after they have had difficulties in vision, breathing, swelling of the face or the whole body,” Nakimuli says.

“Every woman, especially first- time mothers, those below 19 years and those above 40 are at risk of getting preeclampsia,” Nakimuli says.

Others at high risk include twin pregnancies, women who use IVF, women who have changed husbands and long intervals between pregnancies, among others.
When preeclampsia advances to full eclampsia, the victim starts convulsing and it can cause severe strokes, kidney failure, loss of blood before or after birth, among other effects.

Nakimuli says people are yet to understand the disease; some call it witchcraft and others call it a disease for cheating women. She says because of these labels, many women run away from the hospital and end up in shrines or churches for spiritual intervention.

Rose Aliba, a midwife at Mulago hospital – Kawempe, says the biggest impediment to early diagnosis is the lack of equipment, especially in rural health centers.

“Health workers have the training; they also know how to mix the drugs like magnesium sulphate, but they don’t have the equipment to assess the general welfare of the mothers,” Aliba says.

Dr Jessica Nsungwa, a commissioner in the ministry of Health, says they have secured funds that will help revamp the health care system in which neglected diseases including preeclampsia will be dealt with.

“We are doing the costing in order to procure equipment to check every mother’s pressure when they visit health centers,” Nsungwa said. “We are going to construct over 84 health centers across the country and equip them with instruments that will help in diagnosing some of these diseases.”

She said her ministry is also in the process of increasing from four to eight the number of times pregnant women have to visit health centers for antenatal care. With this, she said, diseases such as preeclampsia will be detected early.

On May 22, Uganda joined other countries to commemorate the inaugural World Preeclampsia day with a call on government to pay more attention to the disease that continues to claim lives of mothers and their children.

The Health Systems Advocacy Partnership that brings together a number of health advocacy groups such as African Center for Global Health  and Social Transformation, [ACHEST], Amref  Health Africa, Health Action International and the Health Promotion and Social Development, [HEPS]  called for more research into the causes and treatment of preeclampsia.