Omweso is an African game believed to have been brought by the Bachwezi. Prevailing in Buganda, it was an abomination for women to engage in this male-dominated pastime. As ANDREW KAGGWA writes, the question on women ever defying the speculative stereotypes and engage in the game still stands.

Startled, Harriet Mutesi stared at the omweso play board on display at Makerere University’s Margaret Trowell art gallery. Inquisitively and admiringly touching it on the sides, she passed for that person fascinated with the way this bizarre board looked than its importance – that’s if she even knew what it was used for.

But just in the next room were men chest-thumping on how they would “destroy” each other in the game that calls for massive calculations. Arguably, these men would scorn anybody suggesting that a woman would play with and beat a man in such a male-dominated game. But Mutesi would later prove them wrong.

Not very popular in the country, omweso is Africa’s closest cousin to chess. In fact, Dr Ham Mulira, the game’s patron in Uganda, says his main link to omweso was the mathematical element. 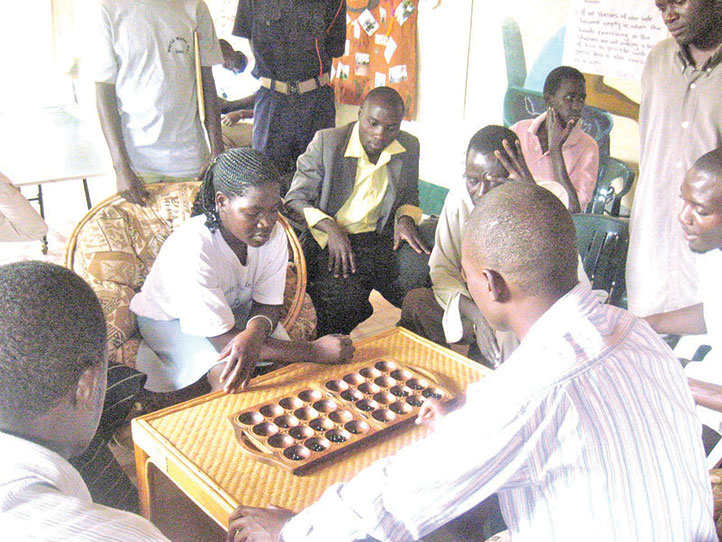 It was popular in the Ganda culture and mostly confined in the walls of the palace where the king would play with his subjects. It is said that traditionally, women such as Mutesi were not allowed to even get close to the playing board, not that the game was one of the things that made one a man, but because it involved a lot of thinking. It was also believed that strange things would happen if a woman dared to play this prestigious male-only game.

Even with a very liberal society today, there are only a few women who can bravely engage in this game, with Mutesi being a member of that hard-to-find class. Hardon Kyagaba, omweso player, president of the Nakulabye Mweso club and world champion of the game, says the regulation on women was simply a moral move.

“Omweso is such an addictive game. If a woman started playing like the men, she might get addicted and abandon her daily duties,” Kyagaba argues.

Indeed, Kyagaba’s omweso club in Nakulabye comprises men although he is advocating for the taboo on women to be lifted.

Omweso requires a board of 32 pits, arranged with eight pits lengthwise towards the players. Each player’s territory is the 16 pits on their side of the board. In addition, 64 undifferentiated seeds are needed.

The normal way to win the game, according to most players we found in Nakulabye, is to be the last player to make a legal move, possible by capturing all the opponent’s stones or reducing them to not more than one seed in each pit. Alternatively, a player can win by capturing on both ends of the board in one turn.

Before the game, four seeds are placed in each of the eight pits closest to a player to ensure that both players have exactly 32 seeds. The first player is chosen by lot. This player arranges all owned seeds on their side of the board according to preference (the arrangement should be strategic). Then, the second player also arranges their seeds. The first player then makes the first sowing move.

It is a game that involves a lot of thinking that even those rallying support behind the players barely chant or scream; they only watch closely as if they are also calculating the moves.

It is believed that the game was brought to Buganda kingdom by the Chwezi people who, on departure, left the design inscribed on different rocks. The game would later become so popular that it entertained the Kabaka in his palace.

The play boards were apparently made from Mukokowe and Mugavo trees, used originally to bring clans and families together or relax the Kabaka during wars. It is believed that Buganda’s past kings—Chwa, Mutesa I and Mwanga—loved playing omweso because they believed it would provide strategy for defeating the enemy during wars.

WHY A MALE-ONLY GAME?

In the research that led to the exhibition, Kirumira said that part of her findings revealed that women who lived in the palace, especially princesses, used to play omweso even when it was an abomination for other females.

She noted that this was because princesses were considered superior females and were allowed to play omweso and thus making it one of the reasons they were never referred to as ‘Nyabo’—Luganda version of ‘madam’. Instead, they were referred to as ‘Ssebo’, a Luganda title for ‘sir’.

It was in that light that they would play omweso even with the Kabaka and in an incident where he lost; he would have lost to a ‘Ssebo’ rather than ‘Nyabo’.

Today though, the game is not as prestigious as it was. An ideal male Muganda would rather go for an ice-cold beer or a hot beverage in posh places after work or on a weekend than play the endangered omweso.

Kyagaba says that today, men are not playing omweso that much because it has been looked at as an idler’s game.

“This has tarnished the game’s brand [so much] that many have forgotten that it requires a lot of concentration and calculation,” she says.

The game that entertained subjects of the Kabaka as they visited the palace has fast become a norm in places where unemployment and crime rule. For instance, the Nakulabye Mweso club is located at the periphery of pork joints, bars and jumbled kiosks. The gutter, dumpsters and already-drunk men looking for the nearest bar – describe a community with lost hope and probably morals.

In such a setting, not even the best marketers can save the brand of the game that calls for ultimate intellect and concentration.

Kirumira notes that because “Ugandans have not seen lawyers, doctors or professors play omweso, they can’t look at it with respect”.

However, it is not only omweso that men have abandoned. For instance, hunting is a crime today; and wrestling, which was famous in Buganda, is considered “too violent”.

It has been noted that just as men bond over a football game or in the gym, to those that played or still enjoy omweso, it’s always the perfect time to bond.

“You will find men fighting over ludo or playing cards but you won’t find omweso players fighting. They disagree though [and] that’s almost all,” Kyagaba says.

Mutesi agrees with the bonding factor. Having started playing omweso in 2014 under her uncle’s tutelage, the 24-year-old bachelor of Human Resource and Management student at Makerere University Business School admits having made close friends with her uncle and his colleagues with whom they play.

Kirumira’s exhibition dwelled so much on creating equality to see women finally have their hands on the omweso playing board. For instance, in a sculpture titled ‘Akakyala’, Kirumira uses the move (akakyala) as a pun to question the legitimacy of banning women from playing.

‘Akakyala’ is one of the most feared moves in the game. Here, the winner captures all the counters of the loser in two moves, at times before the loser makes the first move.

The sculpture tends to question whether the ban on women was intended to save men’s egos since they might have assumed that women exploiting the ‘kakyala’ could have challenged the status quo.

Kirumira says that organizing the exhibition was fulfilling especially as a woman who wouldn’t have been allowed to play the game then.

During the exhibition, some women proved that even with stereotypes, they can equal or surpass men at the board. For instance, when a tournament was organized, two girls: Mutesi and one Juliet Nakyeyune were among the players who registered for the challenge.

Mutesi won one of the challenges and also played against different sets of men after the competition although she admits she’s not that good. And because omweso is not competitive, she believes she might never improve besides having almost no time for practice.

Kyagaba believes that unlike in the past where the game was a man’s thing, these days, they should also encourage their wives to learn because, according to him, besides creating a stronger bond, a woman who plans on omweso play board can never fail to plan for the family.