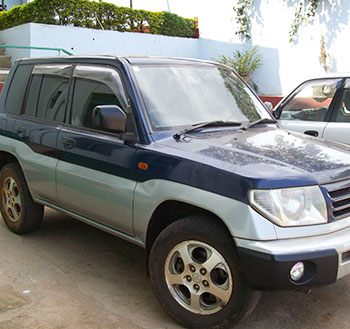 Vehicles today have bars straddling the two wheels, especially the front ones, which move in response to a vehicle’s pitching, in order to keep the wheel on the opposite of the pitch firmly on the ground.

This bar is called the stabilizer bar, and like the name suggests, it helps keep the vehicle stable, especially when it goes through a bend at high speed. Though this bar will mostly be found between the front wheels, some vehicles have them between the rear wheels too, something that is common with 4WD vehicles.

Occasionally, while playing its role of stabilizing the vehicle on different terrain, the stabilizer bar will break, often resulting in some noticeable instability in the vehicle, especially while rushing through bends.

Sometimes when the stabilizer bar is located near the fuel tank, when it breaks, it easily punctures the tank, causing fuel to leak, maybe even leading to a fire. But also, a breaking bar can sometimes damage the shock absorber.

Besides this, a broken bar generates quite a bit of irritating sounds. But what makes the stabilizer bar break? Below are some of the reasons:

Worn-out shock absorbers. When the shocks get worn out in a vehicle, it loses balance, and tends to tilt to one side or the other, resulting in much of the body weight of the vehicle sitting on the stabilizer bar. Therefore as the vehicle moves on a rough road, the unstable body eventually results into the bar breaking.

When the Z-links that are attached to the stabilizer bar ends get stiff or worn out, it will lead to the bar breaking on uneven terrain.

Worn-out or broken stabilizer bar bushes. Rubber bushes help to dampen the friction between the stabilizer bar and other metals, and in case they get worn out, the bar tends to sit loosely, moving when it is not supposed to and the resultant friction leading it to break in the long run.

Bad driving can also lead to the stabilizer bar breaking. By this I mean when some drivers push the vehicle to overstretched limits, mostly on slippery and uneven roads. This sometimes results in the bar breaking.

The other one is, of course, motor accidents or running the vehicle over large and hard objects such as a piece of rock or metal, intentionally or unintentionally. This too would most likely break the stabilizer bar.

A stabilizer bar, once broken, may not stop the vehicle from moving, but it would inevitably make it lose some of its stability. This is mostly felt while driving the vehicle.

It also interferes with the wheel alignments while shortening the lifespan of the tyres. Therefore, to avoid the breaking of the stabilizer bar, one should replace worn-out/broken stabilizer bushes, worn-out Z- links as well as always carry out wheel alignments so as to maintain the vehicle’s stability.