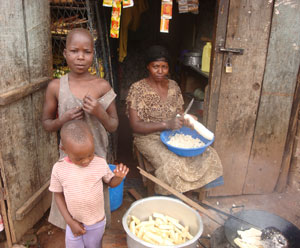 Irene Nakitto sat on the doorway of her one-room house frying cassava chips in Katanga, a Kampala slum. This is her residence, shop and store for her merchandise of tomatoes, onions, bananas and cassava that she sells to the residents of Katanga.

To say that Nakitto is poor would be an underestimation of her plight. A widow, Nakitto has five children whom she lives with in this one-room house which she rents at Shs 40,000 per month. She represents the growing number of the urban poor who, even government officials admit, have not been covered by programmes aimed at eradicating poverty in households.

Alice Muwanguzi, the Resident District Commissioner of Kampala Central says: “There is a tendency to think that all people in urban centres are very rich. Government programmes don’t include Kampala; we had to appeal to the NAADS Secretariat to think of Kampala.

So, we are just coming in as a people who have just remembered. When you think of poverty programmes think of the urban poor. SACCOS mobilised in Kampala are for the rich yet the poor at the grassroots level need support the most.”

Kampala indeed has a growing population which can, according to World Bank indicators, be described as poor—because they have no access to safe water, adequate food, shelter, medical services and education.

“I hear people talking about that group, Bonna Bagaggawale, but I don’t know if it takes poor people like me. I would join if the process is not difficult but their requirements stop poor people like me. Where can I get land, a TV set, a radio to give them as security?” asks Nakitto.

While launching the Prosperity for All programme on October 10, 2007, President Museveni said: “I am happy to announce that through the ‘Prosperity for All’ programme, our people can comfortably uplift their household standards of living through improved household incomes.”

But four years down the road, the poor in Kampala don’t even know what ‘Prosperity for All’ is all about. But government officials say it is not yet too late and Kampala has been brought on board with the launch of its own programme two weeks ago.

While Shs 65 billion was allocated in the 2009/2010 budget, Kampala became the forgotten district as funds were shipped off to the rural areas where 85% of Uganda’s population lives.  Anna Tibaijuka, the Executive Director UN Habitat, says that most Third World countries have put emphasis on rural economy oblivious of the hidden bigger and more serious problem, urban poverty.

And over 300,000 urban dwellers live below the poverty line, with 863,000 of urban dwellers lacking access to safe water and 123,230 without sanitation facilities. Hassan Wasswa, the LC-I Chairman of Kimwanyi Zone that covers Katanga, says that Bonna Bagaggawale has failed to work in his area because the poor in Katanga cannot afford to join Savings and Credit Cooperatives through which they can access credit.

It is mandatory that every beneficiary should be a member of a SACCO; yet membership fee is Shs 20,000. A SACCO is also required to have a minimum of 300 members, have a manager with a diploma in accounting or commerce, an office and proper books of accounts.

“In Wandegeya, I don’t know of any SACCO; when you tell people to form SACCOs, they run away. People here thought there would be one bank they could go to to borrow money and not this bureaucratic process of SACCOs,” he said.

He added that the rural poor have food security because they have land to cultivate but the urban poor may not survive if they don’t turn into thieves. People run away from rural areas into cities in search of a better life and what they find in Kampala is even worse, confessed the 27-year-old Siraje Barekye.

Barekye operates a barber shop in Katanga in a room that accommodates only two people at a time. Before he moved to Katanga, Barekye left his home in Mbarara where he owns land. He says he thought money was plentiful in Kampala. But in the past nine years he has spent in Kampala, his biggest achievement is the barber shop that fetches him about Shs 5,000 on a good day.

If given money, he says, he would gladly open up a bigger salon in a better location.
“I tried to join a SACCO but it was difficult. I said let me use the little I have instead of bothering myself; so, I started this salon.”

According to Wasswa, no one has gone to his people to teach them or even help them access the funds yet many would wish to start or improve their businesses. While in rural areas, the programme supports one person per sub-county, Wilson Wamatsembe, the head of business development service at the Microfinance Support Centre says in Kampala they will consider one person per parish because of the large population.

It remains to be seen whether Kampala will catch up with the ‘Prosperity for All’ bandwagon that it is joining barely a year to the next elections.
smwesigye@observer.ug