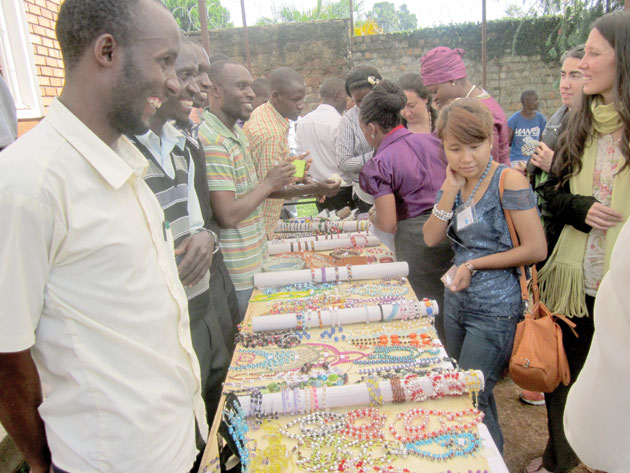 He was so eager to speak to me when I raised my fingers to call him.

“Yes, I saw you calling me. What can I say; I was told you are a journalist,” he said.

The nineteen-year-old Yahaya Bbale was so excited. Clad in an apple green T-shirt, brown jacket and black trousers, he was ready to share his story with me. Bbale was attending a function where more than 12 women in youth organizations from different countries such as Peru, India, Netherlands, among others, had visited the Muslim youth centre, in Kawempe division, that he belonged to.

Bbale is the first born in his family and has two other siblings. All children need motherly love; his siblings did not get it. His mother abandoned them when he was in senior three as soon as their father became penniless.

“My father was once a rich businessman but things changed. Our mother packed all her belongings and left us with our poor dad,” Bbale said.

And, the only words his mother said before she took her last steps from the house were: “I can’t stay in this house; where did your father take all the money he had?” he recalls.

Bbale says, at that moment, he couldn’t stop her angry mother from leaving with their younger sister whom she loved so much. In his mother’s absence, their father did not lose hope but looked after his three children at his home in Kawempe, a Kampala suburb.

At this point, Bbale was a student at Mumtaz SS, also in Kawempe. His father got small businesses where he would raise some little money for their school fees and home needs. In 2010, he sat for his O-level examinations and scored a second grade with aggregate 39.

The excitement was so much at home, Bbale being the first boy in the family to complete senior four, yet the conditions at home were dreadful. Later in 2011, the excitement evaporated when he failed to enroll for his A-levels.

“My father was getting poorer each day. He treasured me a lot but he did not have any money and our mother was also not lending a hand to him,” a sorrowful Bbale recalls.

As the situation worsened at home, his father came out to boldly tell him that it was now time for him to look after himself. He teamed up with his old friends who were also unable to go for further studies. The group was now made up of six boys.

These teenagers tried to hunt for menial jobs around the village, but all in vain. They later resorted to spending time on the streets chatting, playing cards, and smoking marijuana, amongst other vices, but never went to the extremes of committing crimes such as picking pockets, despite their miserable life.

Bbale later met an upcoming music artiste who introduced him to several other musicians who offered him work. But the musicians, whose names he didn’t want to divulge, were only offering him Shs 1,000, yet they knew he was desperately poor.

“I and other boys climbed on the stages to throw bandanas to their fans as they performed, and if any musician had grudges with another, we also helped them in their fights, and sometimes we were seriously beaten,” Bbale narrates.

He added that moving at night exposed him to many girls who engaged him in sexual intimacy and gave him money in return. At the tender age of 17, he had no option but yield to their proposals due to the biting poverty.

Bbale would rarely go back home and mostly slept by the roadside or at friends’ homes.

With the failure of getting what he wanted, Bbale finally returned home and his poor father took him back in. Early 2012, a clan meeting was convened and his father was requested to take him back to school because the clan regarded him a nuisance and a shame to them.

“I almost cried when my father sold his plot of land in the village to get me some money. Not that I did not want to go back to school, but this was his only remaining asset…,” he said.

Bbale enrolled at Buganda Royal Institute in Mengo and did a certificate in Electrical Installation where he completed the course successfully, and his dad declared that this was now the last thing he could offer.  In mid-January 2013, while moving around Kawempe, he met a lady who identified herself as Hajjat Shamim Nabbale.

She was working at Century Entrepreneurship Development Agency (CEDA) International, a not-for-profit organization specializing in leadership, mentoring and entrepreneurship, which is running a Muslim youth centre in Kawempe. Nabbale told him to get a letter from the area chairman as proof that he was from Kawempe division and a passport photo of himself.

“I was worried that they would engage me in acts such as homosexuality, suicide bombings, or other criminal acts,” Bbale said.

The centre was only comprised of male Muslim youths. However, he found the story to be different. He was taught entrepreneurship for one month, and later, vocational skills, specialising in catering.

After two months of mentorship, he graduated in May 2013 and was given a startup capital of Shs 50,000 to open up a business of his choice. Bbale started a chapatti-making business, also dealing in baking ‘half cakes’ and egg rolls, at his small stall in the Kawempe suburb.

The business slowly picked up and within one month, he had collected Shs 300,000 which he used to go back and study. He is now a first-year student at Muteesa I Royal University, pursuing a diploma in Electrical Engineering and paying half of his sibling’s one million tuition fees per semester from his business.

The rest of the money is collected from his relatives, but he feels his life has changed. Bbale is now a proud beneficiary of the Youth Engaged Programme (YEP) implemented by CEDA International at the Muslim Youth Centre in Kawempe division.

Rehmah Kasule, the CEDA president, said although enrolment of Muslims in schools increased over the years, unemployment was still pulling them back.

A study done by the British Council in 2007 titled ‘Islam, what Ugandans say’ shows that Muslims constitute 22 per cent of the population of 31 million people, with 69 per cent below the age of 35 years.

Kasule explained that it was this that triggered her mind to open up a youth centre in Kawempe and solicit for funds from well-wishers to help the youths.

“Most of the youths we receive at the centre are school dropouts who were associated with bad behaviours in their communities, were traumatized and jobless,” she said.

Kasule added that once the youths come to the centre, they are first taken through soft processes, which include counselling, and reframing their minds, among others, before they start studying, at no cost.

To keep them around the centre, a strict code of conduct was established, and this included strict time management involving reporting at the centre as early as 7am, and if one was found to have infringed on the code thrice, he would be expelled.

Business plan competitions are also conducted at the centre, where the best participants are connected to incubator programmes to actualize their ideas and also win seed money as capital to start up their own businesses.

Bbale is one of those whose plan was approved and is expecting to get some funds to boost his business. For the last ten months of service, Kasule was pleased to report that CEDA international had transformed 602 youths, equipped them with hands-on skills in fields such as hairdressing, catering, art and craft and tailoring.

Of these 413 are already running profitable personal projects and 97 have resumed their studies. The programme is looking forward to increasing economic opportunities for the Muslim youths, equipping them to enter the marketplace and empower them to participate in peace and tolerance efforts.

The US mission-funded project started in 2012, and was aimed at reviving the livelihoods of male youths, aged 15 to 35 years, from the Muslim communities of Kawempe, Bwaise, Kalerwe, Makerere, Wandegeya, Nabweru, Kagoma, Tula, Katanga and Kivulu.

Kasule says they have written proposals to other organizations to enable them access funds such that they can also bring on board girls from the same communities in 2014.