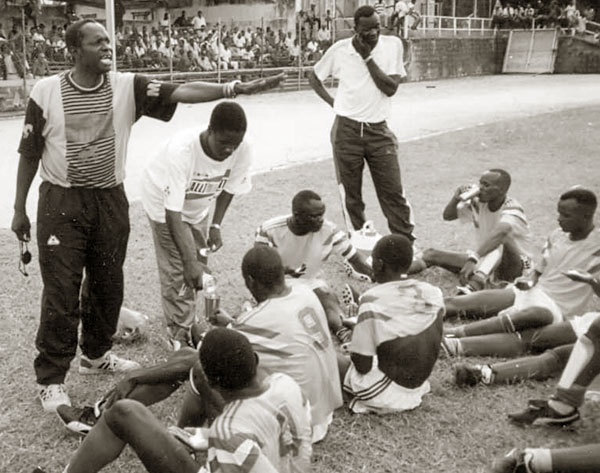 Peter Okee’s place in Ugandan football echelons is secured by virtue of guiding The Cranes to their biggest success when they finished runners-up at the 1978 Nations Cup.

However, there’s more to Okee than just that historic feat. Two league titles as coach/player for Prisons FC plus another two Cecafa titles as Cranes coach underline Okee’s great and also justifies that the Nations Cup success was not a one-off.

I only got to see Okee in the mid seventies. By then, he was Prisons FC coach, having long hung up the playing boots. However, contemporaries that witnessed his playing career describe Okee as one of the finest. One thing that stands out is that his big frame and determination played a huge role.

“He was a strong right fullback, tough and a good header of the ball. It was difficult to beat him. The only weakness he had was a short temper,” says Parry Oketch, who captained Okee at Prisons and in The Cranes. “Off the pitch, he was a gentleman and a fantastic coach.”

Bidandi Ssali, a former coach and administrator who worked with Okee for a long spell, describes him as an embodiment of the orthodox style at the time; “As a right back, Okee rarely attacked but would play his main role of preventing the opposition attacker with distinction,” he says. “He was difficult to beat on that flank.”

Jimmy Bakyayita Semugabi, a former Cranes teammate, sees his strong will as Okee’s biggest weapon. “I cannot describe Okee as extremely talented but he had determination to make sure he was always in the national team.” To sum it up, Abbey Nasur, a former Cranes striker coached by Okee recalls something extraordinary. “Okee was the master of slide tackles and long throw-ins like those we see today by Sunderland player Rory Delap.”

Granted, Okee’s career was one of rapid progression to the biggest stage for club and country. Okee joined Prisons FC in 1965 after an impressive performance in the Abu Cup, a tournament for northern Uganda districts. That dominant display also earned him a call-up to the national team.

At Prisons, he quickly established himself as a tactical genius – often commanding teammates on the pitch and soon he was appointed coach/player under the supervision of Englishman Bill Kirkham. He built a strong side which won the inaugural league championship in 1968 and retained the title in 1969.

Okee also established himself as the undisputed national team right fullback and was ever-present when Uganda lifted the 1967 East Africa Challenge Cup (now Cecafa Cup) but his commitment at Prisons cost him the 1968 Afcon tournament selection at the expense of youthful Ben Ezaga.

He bounced back and was selected as one of only six Ugandan players to feature in the East Africa combined side which played visiting British side West Bromwich Albion at Nakivubo late in 1968. However, in that match, he sustained a rib injury  that sidelined him for weeks. Upon return, he suffered a knee injury and quit the game in 1969 to concentrate on a coaching career. 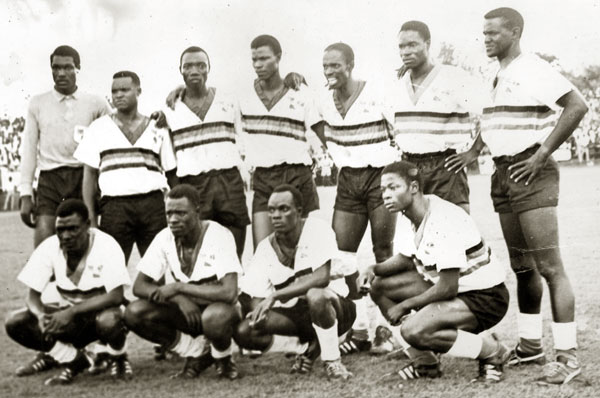 Following the sacking of David Otti shortly after the 1976 Nations Cup, Fufa moved quickly for Okee’s services. “David [Otti] made demands which we [Fufa] felt we could not manage so we decided to go for Okee, who was doing good work at Prisons FC,” recalls Era Mugisha, who was Fufa boss at the time.

Okee, alongside Bidandi Ssali as team manager, inherited a dispirited team that had failed to impress on the continent. The new combo achieved instant success when, in November 1976, Uganda won the Cecafa Cup beating Zambia 2-0 in the final. The Cranes went on to qualify for the 1978 Nations Cup and in the buildup for the continental showpiece; Okee’s men retained the Cecafa Cup in November 1977. Okee’s greatest achievement came in March 1978, when he led the Cranes to the final of Africa Cup of Nations – losing 0-2 to Ghana.

“He was committed and dedicated coach who never slept out of the camp during residential training and besides, he was a father figure to the players,” remembers Bidandi.

Towards the end of 1978, insecurity in the country – which resulted into a full-blown war – had a negative impact on the national team and the sport in general. And following the fall of Idi Amin’s government, the team dispersed. Several players, especially those that belonged to army side Simba, Police and Prisons fled to exile and those that remained were arrested and imprisoned.

The rebuilding cost The Cranes dearly as they posted poor results in the 1979 and 1981 Cecafa tournaments but Okee remained firm at the helm. In 1982, he briefly passed on the mantle to Bidandi when he went for a coaching course in Germany. He returned in 1983 and reclaimed his position but lacked the spark to push the boys to the extreme.

Minnows Madagascar ejected Uganda from the Nations Cup qualifiers the same team bounced back on a high note in May 1983 when The Cranes walloped Algeria, which had just made wonders at the 1982 World Cup, 4-1 in an Olympic Games qualifier. The upset, however, did little to quell calls for his head and in October 1984, Fufa replaced him with Express tactician George Mukasa.

In 1985, Okee took over Jinja-based Nile FC but midway through the season, domestic problems forced him to leave for Kenya, where he handled several clubs including Mumias FC. After 13 years in Kenya, he returned home in 1998 but in a poor health. A few weeks later, he passed away on April 12, 1998. His passing went almost unnoticed in the football fraternity and he was buried in Gulu. Tom Lwanga, who featured prominently at the 1978 Nations, best sums up Okee’s career in five words; “He is Uganda’s greatest coach.”

The author is DirectorMarketing & Promotions of The Observer Media Ltd.
bzziwa@observer.ug