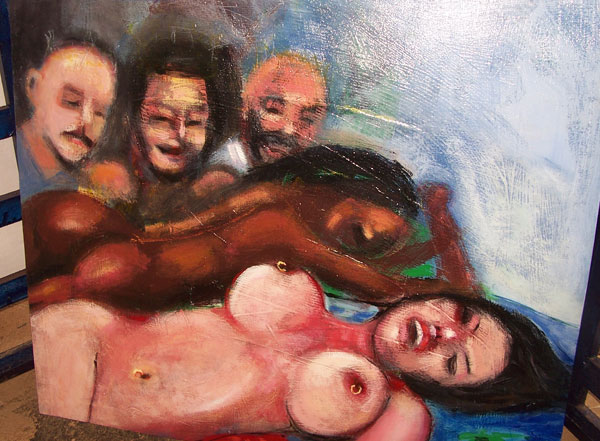 If disciplines were to be graded by virtue, I am afraid art would be the notorious rebel – at least to puritans - than cringe at the thought of seeing a naked body other than their own.

At Fas Fas Art fallery in Bugolobi, six bold artists [two women and four men] are exhibiting their works under the theme dubbed Nudes. Female nudity is especially prominent in the photos and paintings, highlighting the beautiful curves of womanhood. The exhibition, which started on April 15, garnered a lot of art lovers, who were excited to see avant-garde art in Kampala. Fas Fas Manager Robinah Nansubuga said nudity is a form of art that should not be a subject of shame.

“The human body is a creation of God and it’s absurd that some of us are shy about it. There’s nothing to be ashamed of as far as our bodies are concerned.”

Nansubuga also explained why the female body featured more than its male counterpart: “I’m fascinated by the female body because it’s a sense of attraction and I’m proud of that. I wouldn’t be keen on seeing a nude man. No.”

Of the two female artists, Katja Lenart exhibited male nudity in two pieces because she was inspired by the need to be different. Sheila Black concentrated on female nudity.

“Well, for me, I relish doing my works with a semi-abstract element in them,” said Lenart of her work.

Three of the male artists (Ronex Ahimbisibwe, Daudi Karungi or Henry Mzili’s), however, overtly covered the female body, leaving little to the imagination. Some guests thought that the thin line between pornography and nude art had been crossed but Ahimbisibwe adamantly argued for art.

“We live with nudity and taking photos of nude objects or paintings are an extension of glorifying great levels of art,” said Ahimbisibwe.

He explained pornography as sex-oriented images and not necessarily a nude body.

“Art has different interpretations to every onlooker. But above all, as artists, we can’t make the mistake of being predictable and do the usual stuff. If something raises controversy or fascinates people, then you are making an impact on society as an artist,” Ahimbisibwe says.

The pornography debate has not stalled business as guests bought and booked nude pictures on the opening day. And if you want one for yourself, head to Fas Fas before the exhibition closes on April 25.