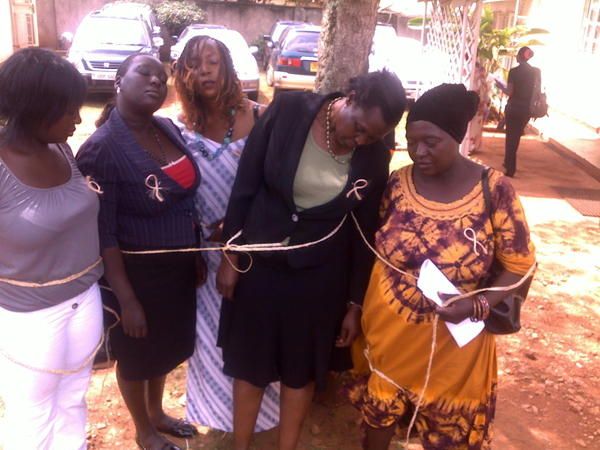 Tied to trees, they nod in solidarity with disease victims

Women have called on Ugandans to join them in the fight against the nodding disease, which has claimed at least 200 children's lives in northern Uganda. The women, who say they are standing in solidarity with mothers whose children are suffering from nodding disease, want government to improve service delivery in the health sector and to hasten research into this disease, whose cause or treatment is not known. They also want better service delivery in education, justice and other sectors.

In a show of solidarity at the National NGO Forum in Kabalagala last Wednesday, the eve of the International Women's Day, the women tied themselves to trees, to identify with mothers that are forced to tie their ill children to trees to keep them safe. The Observer brought to light the plight of children suffering in northern Uganda, some of whom are tied to trees the whole day. The story, Nodding HORROR: 12-year-old victim is tied to a tree for 13 hours everyday

', told of how parents tie their children to trees like animals to prevent them from walking into a fire or wandering off in the bush, where many get injured or die.

Photographs taken by The Observer's Edward Echwalu showing 12-year-old Nancy Lamwaka tied to a tree in Labul sub-county, Pader district, were exhibited at the NGO forum to show the extent of the pain children like her are suffering. The women activists say such treatment of children - or any human being - was hitherto unheard-of, and no mother should go through the pain of tying up their children.

"Is everyone tied up? Can we have more women under this tree? Are we all tied up?" Jackie Asiimwe, a lawyer and women's rights activist, called out to more women to grab a rope and strap themselves to the trees in the compound of the NGO Forum. The women strapped themselves and began nodding to imitate what the suffering children go through everyday. The women's movement is concerned that government's response to the nodding disease has been surprisingly inadequate, despite over 200 reported deaths and more than 3,000 children infected. 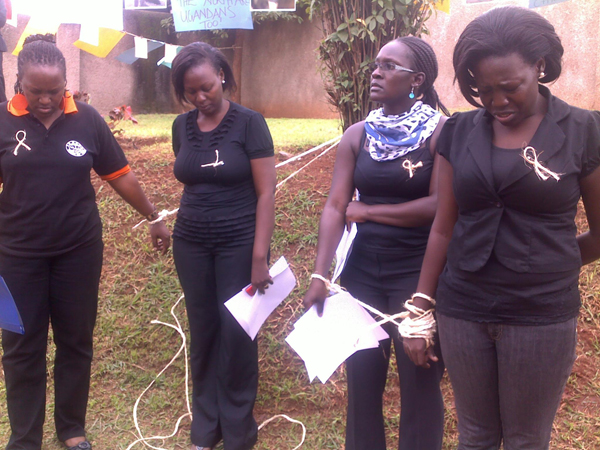 "As government drags its feet, mothers in northern Uganda are living with the indignity of tying their children to trees. Fellow Ugandans are suffering other humiliations, as government squanders money on dubious unnecessary spending - on fighter jets, MPs' cars, State House expenses.... Ugandans remain in bondage to poverty, deception and dispossession," said Barbara Allimadi from Women for Change.

Asiimwe said Uganda is in a state of enslavement and that the action of tying themselves to trees was intended to raise awareness and action against everything that is holding the country back. She said this is only the beginning of the campaign, which will involve lobbying politicians, health experts, NGOs and the international community to take action.

"Uganda at 50 years has a midlife crisis; we don't have an identity and neither can we see where we are going. We would have loved to come here to celebrate the International Women's Day - zero maternal mortality, zero malaria ...- but we cannot," said Asiimwe.
Nodding disease was first reported in 1998, but then it was treated as epilepsy and fits. In 2009, the disease became a matter of concern again when more children started showing signs.

It spread from one sub-county, Lakwang, to cover the districts of Kitgum, Pader, Lamwo and Gulu. More than 3,000 children have been identified as having contracted the disease, but more are believed to be languishing in remote villages where they have not been reached to be counted and treated. The strange disease still has no name, diagnosis, scientific definition or cure some 15 years since it was first seen in Uganda. In 2009, The centres for Disease Control and Prevention USA visited Uganda at the request of the government, but is yet to conclusively describe the disease.

The women activists want government to pass a supplementary budget of Shs 7bn to aid research for a diagnosis and cure for the disease. Kitgum Woman MP, Beatrice Anywar, who recently worked with the President to bring a group of nodding disease victims to Mulago national referral hospital for treatment, says the Shs 1.1bn reallocated from other departments in the ministry of Health is not enough, yet State House has just had its supplementary budget of Shs 92bn approved.

"We need to add a voice to speak out against these kinds of things and the indignity that has befallen our children and mothers," said Deborah Ossiya of Impact Uganda.