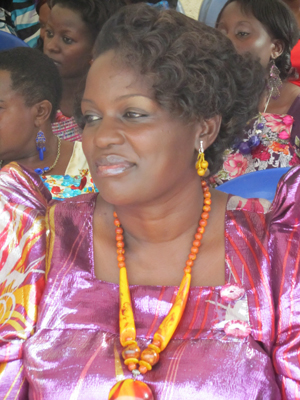 Mariam Ndagire’s decision to retire from active singing and stage acting to filmmaking left many wondering if it was a worthy move.

And true to her decision, she may still be the most booked singer at weddings and private parties, but she has not penned a song in years and instead thrown her weight into her film talent. And now her fifth movie, Dear Mum, is out.  This comes on the heels of successful movies such as Down This Road I Walk, Strength of a Stranger, Hearts in Pieces, Where We Belong and two seasons of Tendo Sisters which is extremely popular on DStv’s Africa Magic-plus.

With Hearts in Pieces being regarded as the best Ndagire film so far, the singer/composer/actress/ playwright is trying to remind people that she was first a singer as Dear Mum is about the life of female musicians and what they go through to reach the top. “Expect some scenes with people actually holding the microphone and singing,” said Ndagire.

The movie rotates around Monica [Laura Kahunde], who is forced into singing because her mother Delilah [Mariam Ndagire] is a singer with so many contractual obligations that suck in her family. Monica goes on to write poems addressed to her mother hence the title of the film.

“This time around, I have touched where it hurts most. Many people see celebrities but they don’t know what they go through. But we are also minding about social and economic issues in the nation. So expect something to make you smile all through,” Ndagire said.

The movie is big on areas that have been lacking in Ugandan movies, like good sound, superb cinematography, gibes and tracking, on top of developing new talent.
Themovie directed by Ndagire stars Rebecca Nanziri, Jude Mufumula, Faridah Nabagereka, Ruth Nalubiri, Kahunde, Eddie Masanso and Zziwa Ddungu, with Peter Ssuuna as the director of photography.

The movie will premier on January 27, at National Theatre with a cocktail and red carpet treatment.