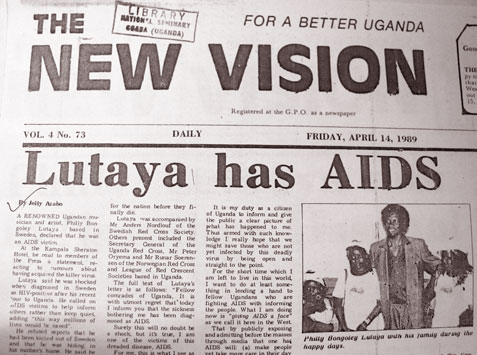 There is a common saying that if you want to be remembered long after your demise, you should, while still living, either write things worth reading, or do things worth writing about.

Philly Bongoley Lutaaya falls in the latter category. Even in death, Lutaaya lives on because of his music and contribution to the fight against HIV/AIDS in Uganda.

Twenty-two years ago, Lutaaya did a most unusual thing when he publicly declared that he was afflicted with the incurable HIV/AIDS. Lutaaya, who was then on a brief visit to Uganda from his Sweden base, read out a statement to journalists at the Sheraton Kampala hotel on April 13, 1989.

“Fellow comrades of Uganda,” he said, “it is with utmost regret that today I inform you that the sickness bothering me has been diagnosed as AIDS.”

He added: “Surely, this will no doubt be a shock, but it is true; I am one of the victims of this dreaded disease, AIDS.”

Lutaaya declared that he had overcome the distress of his ailment and had resolved to use his remaining days on earth to create awareness about AIDS in a bid to save those who were still safe from the scourge.

Made at a time when stigma against HIV/ AIDS was at its highest, when AIDS patients were deeply ostracised by society, including their families and friends, and when the life-prolonging antiretroviral drugs (ARVs) were not yet available, Lutaaya’s declaration was the epitome of courage and patriotism.

His positive living campaign and public disclosure of one’s HIV status must have inspired many Ugandans, the likes of Maj Rubaramira Ruranga, Rev Canon Gideon Byamugisha, Beatrice Were, Dr Stephen Watiti and Livingstone Kasozi (RIP), who also came out publicly about their HIV status.

Reporting his disclosure, The New Vision published the story on April 14, 1989 with a loud-pitchy headline, “Lutaaya has AIDS.”

The following day, the newspaper ran an editorial saying: “Lutaaya deserves the greatest praise for his courage. AIDS is a terrible disease for which there is as yet no remedy and yet it is widespread in Uganda.

False information is still being propagated about AIDS, saying that it is spread by mosquitoes or that herpes zosta comes from mineral poisoning. In this situation, it is important to be frank, honest and scientific.”

Many young people were touched by his move. A section of Makerere University students from Lumumba Hall Christian Fellowship wrote a letter in The New Vision on April 18, 1989, appreciating Lutaaya’s act of sincerity and honesty.

“He has set a challenge to the rest of the victims. We also appreciate his return home purposely to volunteer in AIDS nationwide control campaigns. This is a sign of deep love and concern for the people of Uganda and the world at large,” they wrote.

Shortly after his announcement, Lutaaya moved countrywide, preaching against promiscuous sexual behaviour, talking about the disease in churches and schools with the support of clergymen like Bishop Misaeri Kauma (RIP), who was then Bishop of Namirembe diocese.

He then flew back to Sweden, where he wrote what turned out to be his send-off album, Alone, featuring the epic Alone and Frightened, which was launched in Kampala on September 29, 1989.

Lutaaya left for Sweden again, but when his health continued to deteriorate, he returned to Uganda on December 2, 1989 in critical condition.

He could not walk and was carried on a stretcher from the plane to a waiting ambulance that speedily took him to Nsambya hospital where he breathed his last 13 days later, on December 15, 1989.

The grounds of Namirembe cathedral, where a funeral service was held for him, were filled to capacity as thousands thronged the church to pay their respects to him. Zak Kaheru, who was then minister of Health, praised Lutaaya’s courage in declaring to the world that he had AIDS.

“Lutaaya’s warning to Ugandans to avoid risky behaviour was a good contribution to the fight against the disease,” he said in a statement read for him by Dr Sam Okware, who also described Lutaaya as “a dedicated health worker in the fight against AIDS.” Okware was then Director of the AIDS Control programme in the ministry of Health.

Lutaaya was buried in Bunamwaya, off Entebbe road. Eventually, Lutaaya’s openness was adopted as the government’s official policy towards AIDS.

Lutaaya was born in October 1951 to Tito and Justin Lutaaya at Mengo. He went to Kasaka Primary School in Gomba, and Budo Junior School, before joining Kololo Secondary School where he studied up to 1968.