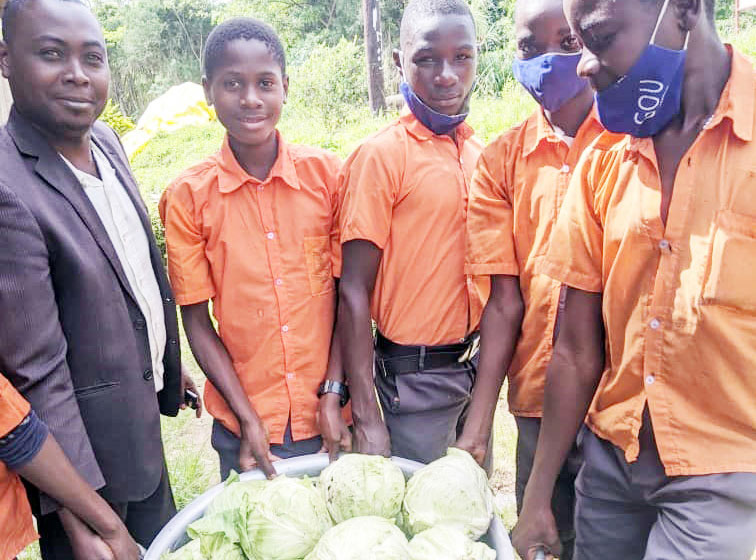 Learners with a cabbage harvest

Life calls on all of us to repair the world and one can never know in what form the call will come.

Late last year, MICHELLE PICKERING, an American expat in Uganda, heard it loud and clear. Pickering is the founder of Zuri Homeopathics, an NGO that strives to increase accessibility to natural medicines for tropical diseases, writes Shoshana McKinney.

One day, while walking around the neighbourhood in Kabata village near Fort Portal, Pickering was approached by a 12-year-old boy who recognized her for her efforts in the area to treat disease with small amounts of remedies. He asked if it was possible for her to sponsor his school books and supplies. Of course, she said yes.

Soon after, Pickering recognized an 11-year-old girl from the community who was carrying a load of firewood on her head.

She asked: “why are you not in school?” The girl admitted her parents did not have money for school fees and supplies.

Pickering knew she had to help the girl get back into school. The girl’s total school costs for the term were Shs 500,000. When a third child who was friends with the first boy approached her, Pickering knew it was time to institute systemic solutions. Her personal virtue alone was not enough.

She went to the school to make the payments for the three children - or so she thought. However, Pickering noticed only 10 of the children were eating lunch.

“The others must be done eating,” she casually remarked to the school’s principal. Her jaw hit the floor when the principal told her that the other children didn’t have any lunch at all.

“To have to stay in school from morning to 4 pm without food blew her mind. The principal invited Pickering back to the school for a meeting with a local area leadership for a strategy meeting. He said it wouldn’t make sense for her to sponsor lunch at only one of the three primary schools in the area. It would incentivize students to leave the schools without a lunch plan. They had o sponsor lunch for all three schools.

What started as a personal act of generosity has become a large community-wide movement. It’s not surprising considering the big warm heart beating at the centre it of all. Pickering, a wife and mother, has four dogs and a cat for good measure. Her NGO, the American branch being Zuri Global Health, provides natural, homeopathic treatments for malaria, typhoid, deworming and immunity support.

“We also did another project for reusable feminine hygiene pads,” Pickering mentions.

A large proportion of the girls in P6 and P7 were missing a week of school each month. Leco Pads partnered with Zuri Global Health to provide a box of four reusable pads to each girl. These pads last through many washing for approximately one year.

As for getting demonstrable results, the lunch program’s results are undeniable. At Niambuga primary school, her efforts have increased attendance by over 200 learners and they stay through the entire school day.

“Before, the learners used to leave campus at lunchtime to pick from the guava trees. Many wouldn’t return to their seats and the ones that did often fell asleep in class from hunger.”

Giving to charity projects that help children lift themselves up through their own skills and effort brings potential donors a higher level of satisfaction. Now that there’s 98 per cent attendance, learners are fighting to stay in school. Those who once dropped out are now coming back to school.

In fact, 34 learners are sponsored for school fees but it’s the lunch program that remains the focus. Thankfully, the majority of parents in this farming community are able to send their children to school from the matoke, maize and beans grown nearby. “Many of the parents have pitched in extra beans and greens to the soup pot,” Pickering remarks.

She recognizes the struggle parents earning Shs 2,500 per bunch of matoke make to send a child to primary school. After a year of funding the program from donations from family and friends, Pickering has reached a critical juncture where support from the larger Ugandan public is mandatory.

The knowledge that Zuri Global Health gives all donations into the bellies of these deserving students offers donors peace of mind. Investing in the future of Uganda means channeling resources to their best and highest use. One would be hard pressed to find a better way to give or to answer the call to repair the world.

Michelle Pickering is a graduate and diploma holder from the School of Homeopathy New York (TSHNY), and a Certified Classical Homeopath, began her homeopathic practice in 2006. She has mentored dozens of homeopaths, worked in 4 hospitals and 15 mobile clinics, and done countless outreaches.

She has volunteered, worked independently and in collaboration with other homeopaths and medical practitioners in the United States, Kenya, Tanzania, the Democratic Republic of Congo, and now, her present home country of Uganda.

On moving to Uganda in 2016, she founded Zuri Global Health (previously Zuri Homeopathics) where she has been instrumental in advancing the field of homeopathy through clinical trials, research and development, training and capacity building, and advocacy.

In partnership with the Ugandan Society of Homeopaths, she advocated for the inclusion of homeopathy as part of the Traditional and Indigenous Medicine Bill. In addition, she has successfully registered four homeopathic combination remedies with the Uganda National Drug Authority (NDA), and collaborated with them to model herbal medicine standards for other traditional medicine practitioners.

Pickering currently participates in the President’s Malaria Initiative (PMI) to Rollback Malaria in Uganda and is part of the global efforts to eradicate tropical diseases. She spends most of her time working in research and development, and doing outreaches in communities impacted by poverty and disease.

She is a passionate healer with an alternative approach, and is dedicated to helping communities move through a wide range of physical and emotional transitions in the most efficient and transformative way possible.