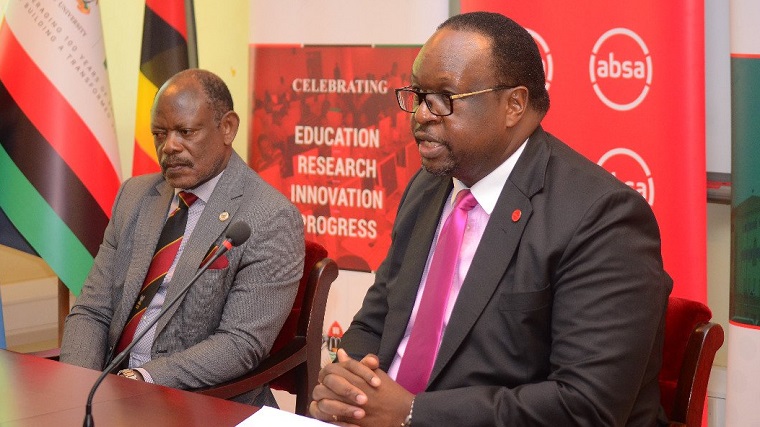 Absa bank has responded to Makerere University’s call for support to her centenary celebrations. Makerere University, which started as a technical college in 1922, is celebrating 100 years with year-long activities that will climax on October 8, 2022.

Mumba Kalifungwa, the managing director and chief executive officer of Absa Bank Uganda, announced a commitment of Shs 65 million to Prof Barnabas Nawangwe, the vice chancellor and CEO of the university. The function was at the Central Teaching Facilty 1, Makerere University, on May 10, 2022.

Kalifungwa said the bank recognizes and treasures Makerere’s contribution in the education and upbringing of good citizens and a competent workforce. He added that over 70 per cent of their senior staff are alumni of Makerere University. Therefore, he reasoned, the donation was a token of appreciation and expression of the pride of associating with such a great and premier institution on the African continent.

“One hundred years [of Makerere] is not a small achievement; not to forget their contribution towards research, innovation, academic excellence and nurturing exceptional individuals that have gone ahead to achieve great milestones both on the African continent and the world stage,” he added.

Speaking at the function, Nawangwe explained that the university is celebrating 100 years of exemplary service to humanity; hence the centenary’s theme which reads, “Leverage the 100 Years of Excellence in Building a Transformed Society”.

He said the celebrations have three key pillars: commemoration of persons and organisations that built Makerere into what it is now; showcasing the achievements in teaching, research, human capacity building and innovation; and connecting with the community of alumni and other stakeholders.

He then stressed the long-lasting relationship Makerere has had with Absa, previously known as Barclays bank. He said Barclays used to do the maintenance of Makerere’s sports grounds for many years, for example.

“Although Makerere University is an institution of Uganda government, it also belongs to people of Uganda, Africa and the entire humanity. So, we are celebrating 100 years of exemplary and excellent service to humanity. I am sure there are over 40,000 alumni of Makerere in influential positions across the world,” Nawangwe said.

The vice chancellor disclosed that besides government funding, the university benefits from the diverse support of various partners. He appealed to the university’s alumni, partners, other stakeholders and well-wishers to support the university’s numerous activities. He said though pledged and donations have already started coming in, the Makerere at 100 Years Secretariat would soon send out information on how to make contributions.

Nawangwe said they have estimated a budget of Shs 2 billion for the centenary celebrations activities which include public lectures every month and an exhibition of researches and innovations, among others. Also closely related are what he called legacy projects such as a university teaching hospital a students’ centre and new residences for students. He said with these legacy projects factored in, the university needs more than $500 million (about Shs 1.8 trillion) in the medium and long term.