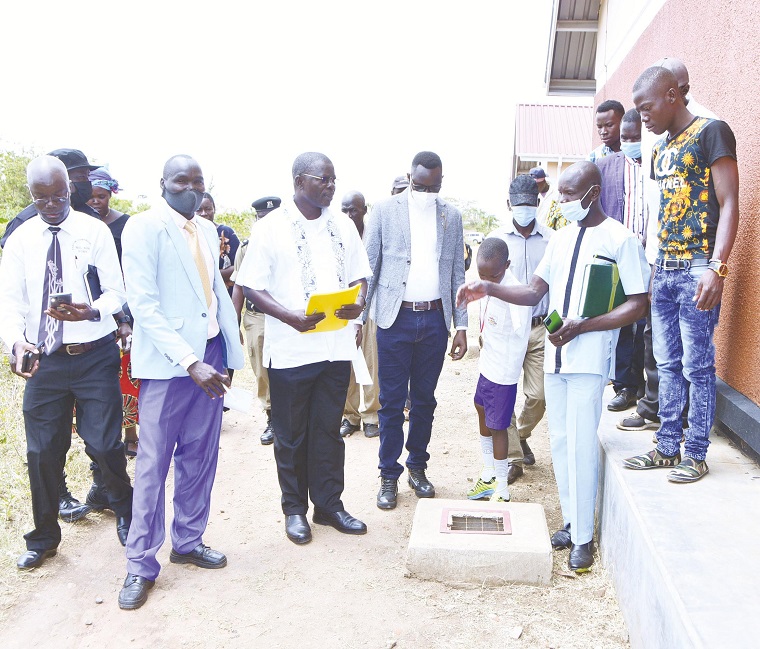 Due to increased reports of floor cracks in newly commissioned seed secondary schools, education stakeholders have urged the ministry of Education to consider terrazzo as one of the most durable and cost-effective flooring options.

They insisted that terrazzo, unlike the ordinary cement flooring, can withstand heavy amounts of foot traffic associated with a school environment, writes YUDAYA On March 23, 2022, the minister of state for Teso Affairs, Dr Clement Kenneth Ongalo-Obote, commissioned two seed secondary schools in Kalaki and Soroti districts.

Whereas the schools are strategically located to cover sub-counties without government secondary schools, locals and education stakeholders in the districts were left disgruntled on the quality of structures handed over to them. In both schools – Kakure Seed SS and Asuret Seed SS – the surface floors are cracked with poor finishing. In 2019, Kakise Holdings Limited was awarded a lump sum contract to construct three seed schools at Shs 1.7bn each in Kalaki, Katakwi and Soroti districts.

“We started operations at a nearby primary school and hosted other classrooms under trees with high hopes in getting our new buildings but the final product is wanting,” Ongwara said.

He had no kind words for the contractor.

“If you are given such a project next time, be patriotic and complete it in time to benefit people. The defects on the buildings are many and may be costly for the school to afford.”

At the school, the administration and classroom blocks, multipurpose hall, ICT library, kitchen, staff quarters, science laboratories, and toilets all have cracked surfaces. For classrooms, the roof is leaking while the paint on the poles has already peeled off. The gutter pipes are broken, which drains more rainwater on the surface. More leakages were reported on the administration block, library and laboratory.

“The kitchens were well constructed with poor finishing. While roofing, the contractor seems to have used wet timber. As the timber dries up, the nails are falling out. Is this what government
schools deserve?” Ongwara asked.

While touring the school, the secretary for social services [health and education] at Kalaki district local government, Denis Daniel Obonyo, concluded that the floor in all buildings will not last more than three years.

“If I had been assigned to commission the school, I was not going to open it until everything is corrected. Even if you are getting money from the government, let us try to make everything possible for people who are going to stay longer with the structures to enjoy them,” Obonyo said.

He added: “The floor has a lot of cracks and voids. I am a technical engineer and I know what I am saying. I think they [contractors] were in a rush to hand over the structures. The truth of the matter is that they put just one layer of nil and did the final flooring. Yet, when you want to put a permanently cemented floor, you need at least three layers of nil so that it lasts for long.”

It is here that Obonyo agreed with other stakeholders for government to upgrade from the ordinary cemented floor to terrazzo for durable structures. He explained that the current local
materials such as cement and sand are of poor quality, thus unreliable for long-lasting structures. The district education officer of Soroti, James Oede, also agreed that government needs to consider terrazzo flooring in subsequent construction projects.

“At Asuret Seed SS, we tried our very best to supervise the work but I think the challenge also lies with our raw materials like cement. The contractor did everything in his means but the cracks kept coming up. Now that the buildings have been handed over, I doubt if the contractor will repeat the work,” Oede said.

He urged the education ministry to task its engineers to “do their work” and undertake a detailed study on the quality of construction materials in areas where the ministry intends to construct more schools.

“In Teso sub-region, if that study had been done, we would not be in blame games. They should personally pick samples and test them instead of relying on the results of the contractors. Here, people’s houses also keep getting cracks however much you supervise the builders,” Oede added.

In the financial year 2018/19, the World Bank partnered with the Education ministry to construct at least 259 secondary schools in sub-counties without public secondary schools under the Inter-Governmental Fiscal Transfers (UgIFT) program. So far, 117 have been completed in phase one. More 115 and 27 schools will be constructed in phases two and three, respectively.

The representative of the Kakise Holding technical team, Charles Opio, who did not explain in detail the defects, insisted that the contractor adhered to all the working rules and regulations. He said monthly meetings were occasionally held with the district engineer to map out the way forward at every stage.

“I remember the district engineer, who is our immediate supervisor, made us undo some floors because he wanted to understand how the defects and cracks came about. We repeated the work under his close supervision and [did] curing for more than three weeks but after a few months, the same effects came back. So, we also don’t know why they came back,” Opio said.

He added: “It could be on the poor quality of cement because we tested all the materials that were used. During the technical handover, we tested the floor but the wobbling sound was not
there which means it was bonded well. Sometimes, we have the defects because of contraction and expansion of the cement.”

When asked if they plan to rectify the defects, Opio said the contractor will sit with the district and agree on other mitigation measures. Meanwhile, the state minister for Teso Affairs, Dr Clement Kenneth Ongalo-Obote, told The Observer that the contractor has acknowledged the defects and agreed to work upon them.

“I will be coming back to the schools to ensure that those corrections have been made. Despite those defects, these are good schools and we are glad that education has been brought closer to people because we seem not to compare what we have now and in the past,” Ongalo-Obote said.

Speaking at the Uganda Media Center last week, the ministry of Education spokesman, Dr Denis Mugimba, confirmed that the ministry is aware of some defects in the commissioned schools, and all are within scope for rectification at no additional cost to government.

“We would like to inform the public that from the time the contractor declares that the school is usable for us to occupy, we start counting the liability period of 12 months. During this period, the contractor is supposed to correct or make right any defects that arise,” Mugimba said.

Since March 23, 2022, Ongwara said, the contractor has neither made contact with him nor held any meetings at school level to evaluate the damage yet more defects are still being registered with students on holidays.

0 #1 kibedi nkuutu 2022-05-06 10:46
I would rather that such government projects should be inspected by independent structural engineers before they are handed over.

And these engineers should also not be told where they are going to inspect. It should be like on-spot inspection. This would give this shoddy contractors a run for their money!
Report to administrator