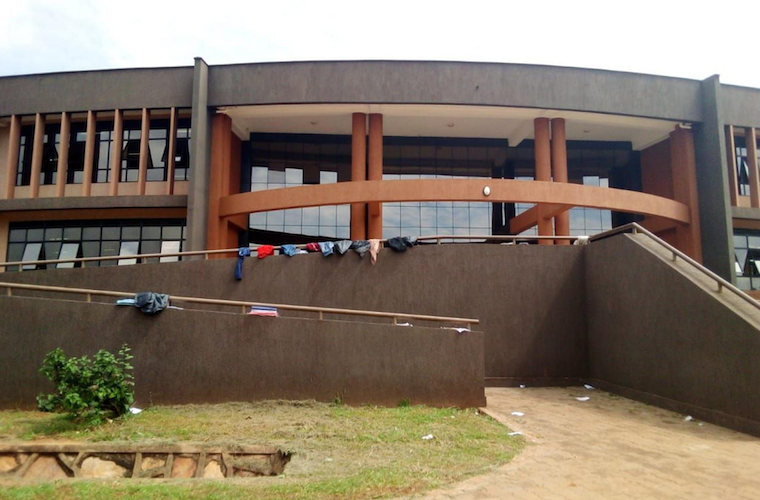 Some of the veils seen outside the examination hall

Muslim students at Kyambogo University are demanding the deployment of female Muslim officers at security checkpoints after students were last week forced to remove their veils before being allowed access to examination rooms.

On Tuesday last week, a male police officer was captured on video forcing female Muslim students to remove their veils before entering the examination hall at Central Lecture Block (CLB).

The action of the police officer didn’t go well with female Muslim students in particular and the Muslim community in general. Sheikh Bakhit Cucu, the education secretary at Uganda Muslim Supreme Council (UMSC) described the action of the officer as a breach of the freedom of religion enshrined in the Constitution of Uganda.

“To us (Muslims), the nakedness of a woman starts from the head up to the toe. So, the moment you unveil her you have undressed her. It is degenerating her dignity,” Sheikh Cucu said.

Prior to the incident on Tuesday, a similar incident had earlier on occurred at the same university where a female student, Aisha Nanfuma was denied entry into the university because of declining to remove her veil.

Sumayah Nakawesi, a third-year student pursuing a bachelor's degree in accounting and finance recounts incidents, where metal detectors were passed over her head at the university checkpoints yet those with caps and scarfs, are never treated the same way.

"Last time I experienced such a thing whereby I was entering Kyambogo campus, they were checking me and they even placed that machine over my head and I was wondering why are they placing it over my head. So when I saw that incident yesterday about removing a Moslem veil to enter it is not good. It is not good," Nakawesi said.

Shadia Nankabirwa, a first-year archaeology and heritage management student, said that while the first incident seemed like an accident, the one of Tuesday proved that Moslems are being targeted following the recent terror attacks.

"It was massive by the way, if you had anything called bonnet inside, they did not want to know. We did plain hair. They told us; if you don't want then move out of the [examinations room]. They did not allow us even to enter. They told us 'remove your veils to do the paper if not, out.' So we had to do what they had requested because we had to do the paper," said Nankabirwa.

Halima Namuddu, another victim, says that they have to live with such humiliation which affects their concentration in the examination room.

"Us practising Muslims, this action is about disrespecting someone. If you come and tell someone to remove his or her clothes this is disrespect and disrespect of religion," said Namuddu.

Safina Musenero, a first-year arts in education student regretted that she has to do her first examinations at the university under unfair circumstances.

“Sometimes you settle and think the community is inclusive enough until such things come up. The university should help us,” she said.

Naswiba Nasanga, who captured the video highlighting the plight of female students at the university has since gone silent because of reprisal from some of her lecturers. Kyambogo university vice-chancellor, Prof Eli Katunguka has since issued a statement condemning the incident and promised to ensure it doesn’t happen again.

“…we do not agree with the manner in which the police officer did it.” he said.

Despite this, Bashir Lule, chairperson of Kyambogo University Muslim Student’s Association accuses the administration of neglecting complaints from Muslim students.