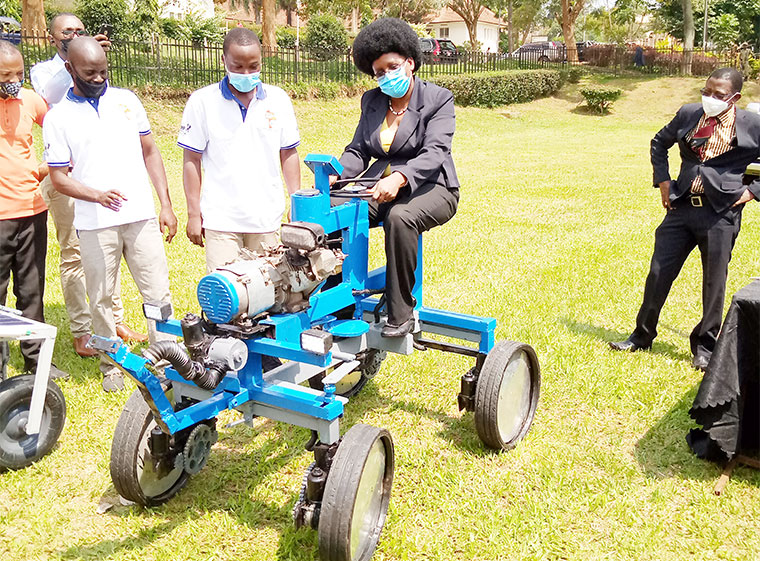 The new minister of Science, Technology and Innovation Dr Monica Musenero has formed six think tanks to enhance innovation in the country. Musenero said this was one of the restructuring processes taking place at the ministry, which was recently placed under the President’s Office, writes JOHN MUSINGUZI.

The think tanks are Pathogen Economy, Travel Economy, Engineering, Beauty and Parlour, Digital Economy and Agro Economy. Musenero said the transformations in the ministry aim to put the scientists at the centre rather than the administrators. The think tanks will guide the determination of priorities and trends.

The funding model of these think tanks and specific projects will strictly follow priority levels rather than democratic broad dispersal of limited resources to each project whereby eventually none of them reaches maturity.

Emphasis will be put on purposefulness, prioritization and avoidance of competition and rivalries. Above all, there will be a big push for mindset change to ensure that ideas and prototype products don’t get shelved but get replicated, commercialised and made to hit the marketplace.

The think tanks will be multisectoral, build themselves by recruiting and engaging their specialists and coordinating with one another to build synergies, she stressed.

Musenero apologized to scientists on behalf of government about the frustrations of little or no support to their ideas and research projects which has led to dampened mood among the youth and a dependency syndrome for the economy.

“We are going to be on one side, as long as I am still in this position,” she assured.

So, Musenero challenged our universities and other higher institutions of learning to train students as part of the national workforce.

“We are wasting a lot of this powerful energy of our students… In that library over there, there are several novel ideas, concepts and inventions lying there idle, unfacilitated and unused.”

She promised to help many institutions of higher learning to reposition theory and training.

She expressed sadness that the knives she uses in her kitchen have to be imported, and from as far as China, not any nearby African country. She castigated the mindset of being dependent slaves and copyists.

“We might produce great economic theories and philosophies, but we must also create new products so as to improve our economy and people’s wellbeing… It used to be ‘publish or perish’, but now we should add, ‘products or perish.’”

The students who made the diesel engine, tractor and solar weeder were guided and assisted by faculty (lecturers) and a Ugandan medium-size enterprise called Kevoton Motions Engineering Ltd. The tractor has accessories for plowing, planting and weeding. The solar weeder can slash compounds and also spray plants that need pesticides or spray herbicides.

Musenero requested the innovators to be gender-sensitive in their designs. So, she asked them to replace the hand starting of the engine, the weeder and the tractor and power generator with button switches.

Vice chancellor Prof Barnabas Nawangwe said the shelved and underfunded projects at Makerere are very many, and can be resuscitated if government can provide financial and logistical support.

“We have very creative and productive minds here at Makerere. Makerere has plenty of potential. Students make formulae and prototypes and just abandon them, hence there is no headway. We are putting together our academia with some small and medium enterprises, but that can’t be sustainable. We are also working with the private sector and government to make products we can export; for example, the Katwe cluster working with Makerere makes inverters that are exported to South Sudan,” he said.

Nawangwe added: “We are doing many things ahead of what Koreans were doing when they decided to not assemble vehicles but make their own vehicles. With a mindset change, we will encourage our students and professors, to keep adding on and improving on their errors.”

He said the college of Veterinary Medicine, Animal Resource and Bio-Security now has the best lab equipment of all universities on the continent, and the college of Business and Management Sciences produced 100 companies last year.

The minister promised to support the exhibited design projects to reach commercialization level.

“Bring us the proposals on ‘what next’ and we support you. With what I have seen today, Uganda has entered the engine manufacturing club; we shouldn’t go backwards.” She hailed Makerere’s sanitizer, “While many women complain that many types of sanitiser on the market make their hands dry, I am impressed my hands are still moist and soft hours after I used your sanitizer.”

Thank you for adding your presence to issues that add no value to this country. Whatever you and your phoney Makerere researchers are claiming to have innovated are non-innovations at all!!!

I and millions of clear headed Ugandans refuse to be duped by your lazy arm chair pseudo scientists and innovators. Any one who cares to educate him/ herself knows that the diesel engine was invented more than 100 years ago, during the internal combustion engine "revolution".

I use "revolution" for lack of a better word. Diesel and other internal combustion engines were revolutionary in the 1890s when Ugandans were still living god-knows-where!!!
Report to administrator
0 #2 Failed State 2021-09-03 15:09
Madam Hon Minister/ Presidential Advisor, please tell Ssabalwanyi that This is obsolete technology to say the least...the world is in the middle of a clean energy revolution, if you know what am talking about!!!

diesel is a "dirty" fuel the world has already moved on from if you are really well informed.

Clean energy is the name of the game today and tomorrow!!!! Even that fossil fuel in the Albertine Graben is past its sell by date, and here you are making a fool of yourself.

We shall not allow you to make fools of us because we know better. Have a nice day madam, and continue enjoying tax payers money for doing alot of nothing. I rest my case
Report to administrator