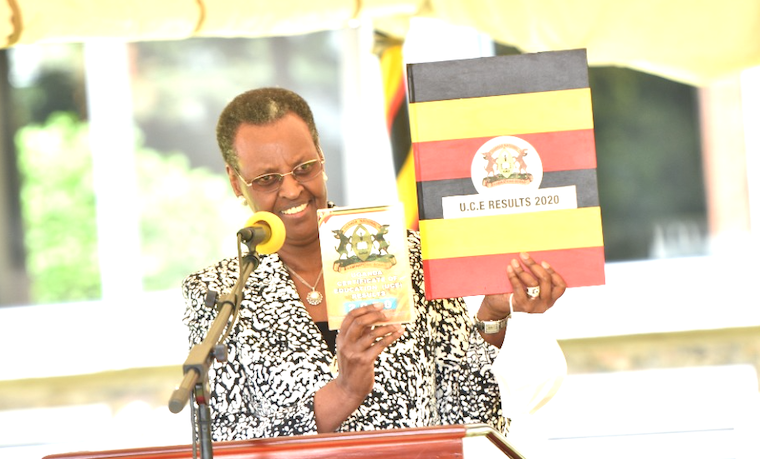 Male candidates have significantly performed better than their female counterparts in the just-released 2020 Uganda Certificate of Education (UCE) examination results.

Speaking at the release of the results on Friday at State House in Nakasero, Uneb executive secretary Dan N. Odongo said males outshone at all levels despite registering lesser candidates.

“Overall, male candidates performed better than females at all the higher grades. In all the large entry subjects, males still showed better performance, with differences more marked in Mathematics and Sciences,” Odongo said noting that this trend in disparity has been observed over the years.

Uneb results show that females only performed better than males in English Language. At percentage divisional passes, females continued to trail. At least 14.3 males passed in division one compared to 9.9 per cent females in the same grade.

At division two, more males excelled with 22.9 per cent leaving females at 19.4 per cent. It’s only at division three where both gender passed at 24.7 per cent. More females settled for division four at 39.7 per cent as males posted 33.2 per cent. Some 6.3 per cent females were ungraded compared to 4.9 per cent males.

In a speech read on behalf of the Uneb chairperson, Prof Mary Okwakol, by the director education standards, Dr Kedrace Turyagyenda, candidature in previous examinations had been increasing between two to three per cent annually. Okwakol, however, said in this examination, candidature dropped by 1.3 per cent which is more than 4,000 candidates.

She attributed the reduction to failure of some private schools to reopen in October 2020 making some learners unable to register for the exams. Some students did not also report back to school because they had taken on menial jobs while teachers in private schools also abandoned teaching for other income-generating activities.

“In some private schools, parents failed to get money for registration fees and other school charges; a few head teachers cases of girls being married off as some parents reportedly did not bring back their children due to fear of the COVID-19 infection in schools,” Okwakol was quoted as saying.

While releasing the statement of results, Odongo said that there was better performance overall, compared to 2019, with 311,233 (4,309 more) candidates passing compared to 306,924 who passed the examination in 2019.

The percentage of candidates who passed across all divisions one, two, three and four increased tremendously. Some 39,968 candidates passed in division one, 109,750 in division two, 191,178 in division three and 311,233 in division four. Uneb results show that 329,648 candidates were ungraded and as thus, cannot advance for A-level education. These candidates can either repeat S4 or join technical & vocational training institutions for skill-based opportunities.

According to the board, there was an overall improvement in performance in the large entry subjects like English, CRE, IRE, and History save for Geography, Chemistry and Biology. Although Biology showed a slight improvement at the distinction two levels, the overall pass levels for Science subjects remained low where nearly half of the candidates have not achieved the minimum Pass eight levels with Chemistry still being the worst done subject.

Odongo noted that the reasons for poor performance in Science subjects have remained the same as in the recent years.

“Candidates showed weaknesses in the handling of apparatus during the practical tests. The weaknesses were also shown in making and recording observations and drawing conclusions from those observations, tabulation of experimental results and interpretation of the results to meet the demands of the question,” he said.

He added that the inability of candidates to write the correct symbols of elements, formulae of compounds and equations, among others led to the poor performance in Chemistry with some candidates merely forging figures of experimental results in the practical papers.

“Most candidates showed lack of practical experience as many schools tend to handle practical aspects of the curriculum much later in the course. As a result, students do not develop the necessary skills. This could explain why most malpractice cases are in science practical papers,” Odongo said.

In accordance with Section 5 (2) (b) of the Uneb Act No. 1 of 2021, the board has also withheld results of 1,292 candidates compared to 1,825 candidates in 2019. Physics, Chemistry, Biology and Mathematics have been the most affected subjects of malpractice with external assistance, collusion among candidates, impersonation and script substitution as the common cases.

“We had cases where some people write examinations from outside and at the time of sealing script for the rest of the candidates, the script of one candidate is removed and the one written from out is inserted in the envelope,” Odongo said.

He added that examination centres from which results are withheld will be notified through their portals to give the affected candidates a fair hearing before a final decision is reached by the board.

Meanwhile, like at PLE, all heads of UCE examination centres will download results from their portals. No hard copy result lists will be issued from UNEB offices until conditions are more favorable to physically collect results.

To access results through mobile phones; type UCE, leave space, then type the correct index number of the candidate; e.g. U0000/001 and send it to 6600 on the MTN and AIRTEL networks.