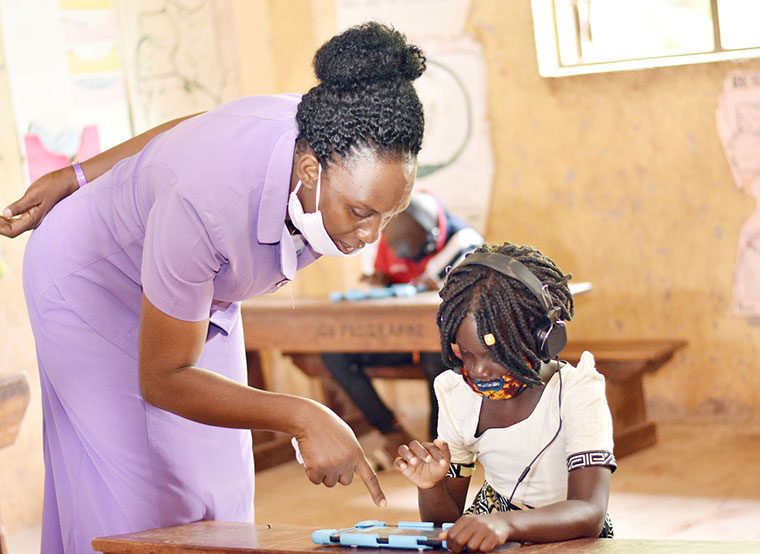 A teacher helping a student before schools were re-closed

With the second lockdown starting to financially bite, there is looming uncertainty on the long-awaited COVID-19 relief funds promised by government to private teachers.

About a year ago, the government announced a revolving fund worth Shs 20 billion to support private teachers whose livelihoods were disrupted by the nationwide lockdown in March last year as the government ordered all schools to close, sending over 15 million learners home.

Government then promised to release the money in a few weeks to help the teachers overcome the effects of the lockdown. However, almost a year after, the money has remained elusive with many people wondering whether it will ever serve the intended purpose.

Juma Mwamula, the general secretary of Uganda National Private Teachers Union, says some bureaucrats in the ministry of Education and Sports have frustrated their efforts to pursue the money.

“The bureaucracies are leading to the delay. For instance, at first, we were told to form Saccos, as we concluded they said that we form associations. Months later they started new ones (associations) right from the school to national level,” Mwamula complained.

In the earlier arrangement, the government promised to channel the money to teacher’s Saccos through the Microfinance Support Centre (MSC). MSC had projected to disburse a maximum of Shs 30 million to each Sacco with 30 teachers.

However, MSC set tough conditions like requiring the Saccos to present a two-year record of audited books yet most of them had just been created. Looking for an alternative, the Finance ministry relocated the money to the ministry of Education.

Hasadu Kirabira, a private teacher and administrator, who was once at the helm of the ministry of Education led steering committee, says that although the Education ministry was expected to execute this fast, things become more uncertain over time.

“During our first meeting, the First Lady (minister of Education) wanted us to disburse the money in a week. However, several members of the committee prolonged the process arguing that we had to get a fund manager,” Kirabira said.

He says that two entities including Centenary bank and Walimu Sacco were suggested but before one was selected, technocrats in the ministry raised concern about uncoordinated private teachers suggesting re-organizing them in a new formal structure.

From around September last year to January this year, the ministry through district education officers started creating associations to get an apex body that led to the birth of the National Private School Teachers Association (NPSTA).

However, six months later, the ministry is yet to finalize the process. Alex Kakooza, the permanent secretary in the Education ministry notes that with the apex body in place, the ministry is now working with it to get a suitable fund manager to disburse the money.

On the contrary, Hamid Nambaale, an executive member of NPSTA, says before the second school closure they had suggested that Walimu Sacco takes the lead and wonder why the ministry insists on searching for a fund manager. However, a source from the ministry of Education, says that the authorities had earlier ruled out Walimu Sacco basing on their experience.

"They cannot allow Walimu Sacco to take on the task. For a fact, this entity is still under investigation over mismanaging funds,” the source added.