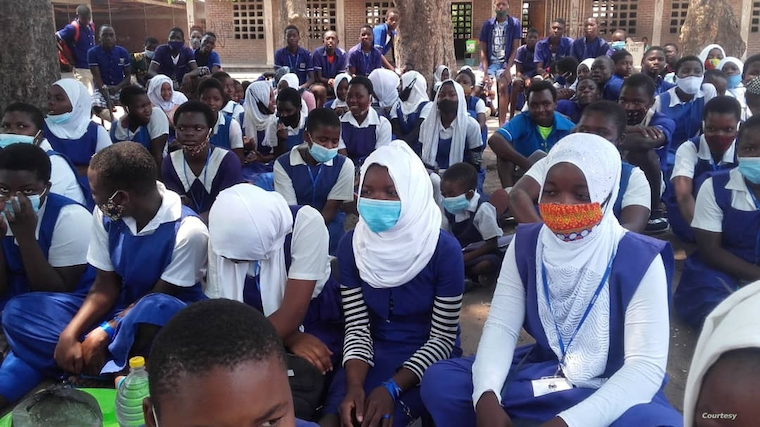 FILE - A touch of religious coexistence - A mix of Muslim and Non-Muslim students in Malawi. (Courtesy: Hijab Task Force)

Malawi is taking steps to start allowing Muslim students to wear the hijab, or headscarf, in all educational institutions. The controversial issue has forced some schools to close in the predominantly Christian country.

The issue of wearing the hijab has long been a point of contention in Malawi, especially in Christian-run schools where female Muslim students have not been allowed to cover their heads in class.

The controversy reached its peak in October when suspected angry Muslims in eastern Malawi torched the office of a Catholic primary school head teacher who had turned away pupils wearing the garment. The standoff forced several Christian primary schools in the Muslim-dominated region to close.

As a result, the ministry of Education requested that the quasi-religious Public Affairs Committee, or PAC, help resolve the matter. Gilford Matonga, a spokesperson for the PAC, says a compromise had to be reached.

“One of the recommendations is that the Islamic girl child is allowed to wear the hijab that matches the school uniform wherever they are going to school. On the other side is that no girl child shall be forced to put on the hijab if they wish not to put on [the hijab],” Matonga said.

Abdul-Salaam Faduweck is the spokesperson for the Hijab Task Force, a branch of the Muslim Association of Malawi, which has been lobbying for the scarves to be worn in all schools nationwide.

He said the task force has welcomed the PAC’s recommendation with the expectation that the school uniforms will be in line with a complete hijab.

“We need the uniform to be according to the understanding of the meaning of hijab itself. If it is a skirt it has to be a long skirt, it has to be loose not tight. If it is a blouse it has to be with a long sleeve and not very tight. And the learner has to cover the head with a scarf. That is a complete hijab,” Faduweck said.

Imran Sheriff, a lecturer in religious studies at the University of Malawi, said the recommendation is partly impractical, especially since the headscarf is also regarded as part of the school uniform in Muslim schools.

“The putting on a hijab is based on religion and putting on school uniform is based on school regulations in order that the students should look equal. So, if it is an Islamic institution, if the hijab is part of the uniform, then everybody will be obliged [to put on a headscarf],” Sheriff said.

Michael Kaiyatsa, executive director for the Center for Human Rights and Rehabilitation in Malawi, said now is the time for Malawi to allow all religious symbols into class to promote religious coexistence.

“It shouldn’t be Muslims or a particular religion. If we allow, then it should be across the board. If people are allowed to come to schools with rosaries around their necks, then why shouldn’t we allow other religions to do the same?” Kaiyatsa asked.

The PAC’s Matonga said the organization is expected to present the recommendations to the education officials next week for their input. Education authorities told VOA they could not comment on the matter now because they have yet to receive the recommendations.