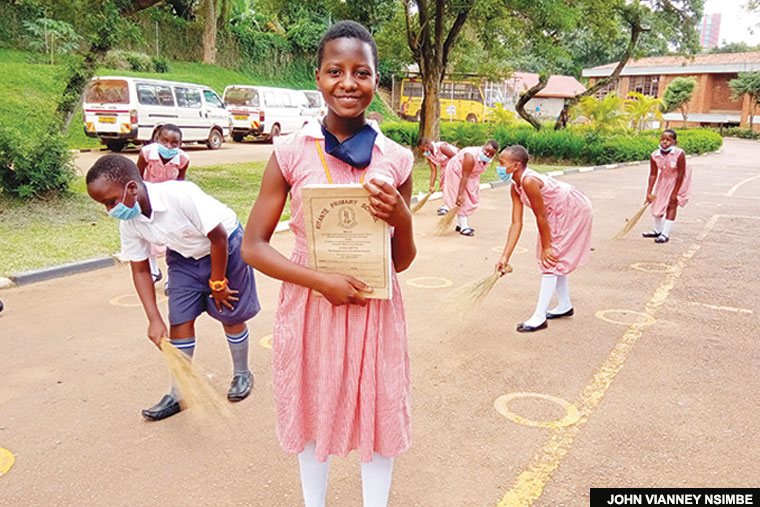 The new school term schedules will take some getting used to.

Presently, while the candidate classes of primary seven, senior four and six are enjoying their vacation, having all completed their final exams by April, the senior three and five students just got their holidays last week, after returning to school in February.

For the candidates, school resumed in September 2020, as the rest remained at home. This was to ensure that with only candidates returning to school, social distancing would be observed as one of the major standard operating procedures, to avert the spread of Covid-19.

The other classes: primary four, five and six continue with their studies having resumed in March together with the senior one and two students who resumed last week after more than a year at home. Those in primary one, two and three resume their studies on June 7. Well, officially, that is; in many schools, parents are already stealthily taking their children to school sans school uniform, after the lockdown on schools became unbearable for many.

This last lot will wind up the troubled 2020 academic year at the end of July. This will pave way for the start of the 2021 academic year in August, which will run up to April 2022 for all classes, as all learners enter new classes.

Although it will be refreshing to enter new classes in which many would have been already had it not been for the one year without school, the confusion for all is evident. For many learners, adapting to the new normal has proved to be another hard paper. Fiona Nabiryo, a Makerere University second-year student pursuing a bachelor’s degree in Economics, reflects on her time back at school as a tough one.

“You see, when school was suspended in March 2020, we were left with two months to complete the second semester. At the time, my parents had raised the full tuition for the semester, which was just under Shs 2m. But I could not pay it, because of the lockdown,” Nabiryo said.

Yet, Nabiryo laments, when they returned to school in September, they were expected to clear the old balances. But because her parents had not been working, the money was no longer available. Worse still, because of the time lost at home, the university wanted to make sure the students make up for that time.

Essentially, there was a short break between one semester to another, which compounded the tuition pressure. To pay upto close to Shs 4m in a space of two months was a real strain. In addition, Husina Kobugabe, a student at Ndejje University, noted that they have had to contend with so much classwork than usual, to make up for the time away from school.

Lecturers at different universities are pumping students with up to six courseworks every two weeks, and a student at Makerere University Business School (MUBS) said many of her classmates have applied for a dead year, because the pressure has pushed them to breaking point.

Kobugabe said: “Almost every free period we used to have to do our own things, is now for classwork. There is too much pressure but we just have to get on with it.”

Perhaps that is the attitude that works to overcome the inconvenience.

For example, Jordan Ssekono, 12, who is in P6 at Sir Apollo Kaggwa primary school told The Observer: “Because of the social distancing demanded, we hardly play. In fact, we also have lunch in class instead of the dining room. It is one person (masked) per desk these days. Previously we would be two.”

What this means for the children in the future remains to be seen. Raphael Lemi, 12, of Kampala Parents School, said not being able to play football and basketball like he used to do before Covid-19 has made him dislike school. But he is now coming to terms with it.

Bob Buga, a teacher at Kampala International School Uganda (KISU), said their learners went a little crazy when they discovered they could not play, in order to avoid body contact.

“It can be depressing to children not to play. But what we did, was to get each of them a ball to play on their own in the field, although it is not the same,” Buga said.

For many learners, who were used to having close-by neighbours, now school desks have become a lonely place. Kitante primary school’s Kwagala Nakaweesa, 12, alluded to this, despite her agreeing that social distancing is intended for her safety.

Nakaweesa said she was used to having her friends close by as they chatted and played and did girlie things. Now she has to speak through a mask and sit far from them.

“And here at Kitante, the school was marked by social distancing circles near the waiting and arrival areas. Those circles provide the spacing within which we must stand while talking to others,” Nakaweesa said.

Because learners have been away from school for almost a year, there is more concentration on classwork than anything else, William Musaazi, a teacher at Nakasero primary school, noted.

And Anne-Marie Nagawa, 11, of primary five at Nakasero primary school, does not seem to mind less play, because when she returned to school this year, she had forgotten so many things she had been taught before the lockdown.

Apio Okoit, 10, of Entebbe Changsha Model primary school is aware the ministry of Education and Sports has not allowed them to do sports again. Instead, they skip the rope, to keep active since it enables social-distancing, Okoit told The Observer.

WHERE IS THE FUN?

But it is not only sport that has been affected for learners. According to Hilary Kwijuka, a senior five student at St Charles Lwanga Kasasa in Masaka, even the video entertainment was stopped. Videos or drama plays used to be staged in the Dulverton Hall, which is enclosed space, not favourable for social distancing. Now it is work, work, work…

Hussein Tulibagenyi, 11, and a primary five pupil of Maganjo UMEA primary school, admitted he had also forgotten very many things.

“In fact, I did not find learning on TV productive, because I could not ask the teacher whatever I had not understood,” Tulibagenyi said.

Yet, for Damian Katende, 9, a P4 pupil of Hormisdallen primary school, Kyebando, he is disturbed by the fact that he is not allowed to mix with his classmates, who are in the boarding section, which is a protocol to avoid Covid-19. Also, Katende added, their parents are not permitted to access their classes, as a precaution against the pandemic.

In addition, Gloria Namuli, 12, of Victoria Mutundwe primary school, said that in class they are not allowed to share scholastic materials. It gets worse for Desmond Buule, 12, P6 at St Joseph Catholic primary school in Nansana.

As a boarding school pupil, he laments the fact that his parents lost their jobs during the lockdown. So, even returning to school with all the requirements was hard. But now, he has to contend with the fact that he has to depend on school meals alone, because his parents are struggling to survive at home, let alone sending him grub. The option would be begging the day scholars, who come with lots of snacks daily, but because of the Covid-19 threat, he is forbidden from sharing foodstuffs.

Buule’s classmate, Hannah Byobona, also 12, is troubled because of the too much teaching they are experiencing.

“We can get like three different teachers teaching the same subject but different topics in one day. They want to cover the syllabus, but then our books run out. Then, there is the issue of social distancing, where we are not even allowed to engage in group discussions anymore with friends.”

And those in day schools are contending with the long distances they have to adjust to once again. With taxi fares more than doubled last year due to reducing passengers from 14 to eight, many learners now have to walk.

The Observer saw an S2 student of Makerere College School rubbing her feet with balm, saying it was her first day back in school shoes after 14 months, and her feet hurt from walking from Makerere Kavule to her school.

While these learners have learnt to bear a lot, losing one’s mask can give them sleepless nights; as Byobona noted: “You will not enter class.”

That is how strict life has become because of Covid-19, and to a large extent, artificial. Ssekono of Sir Apollo said they have been studying more through textbooks, as writing notes on the blackboard appears to have been abandoned by the teachers.

This is apparently intended to enable quicker teaching, because writing notes takes a lot of time. But to Ssekono, adapting to this new approach has taken him time. And it is not just parents marveling at how much their children have transformed in a year.

Viola Namugalu, 15, a senior two student at St Thomas Aquinas SS Maganjo has witnessed so many changes in her schoolmates, which include really growing so much in the one year away from school. Nevertheless, some changes Namugalu has witnessed have left her dismayed.

She said: “Some students are speaking a lot of vulgar language, which was not the case before. Clearly, they must have been exposed sexually, which is worrying. You see some have brought mini-skirts and make-up, which are forbidden in school.”

Well, at least those ones made it back to school; upcountry, many learners have completely ditched school to become mothers, farmers and businessmen.

Joyce Namuli, the Head Girl at Caltec Academy, Makerere, can possibly relate. She spent much of the lockdown working. However, getting her mind back to classwork has been tough, because of the many thoughts she still harbours regarding the money she would be earning now.