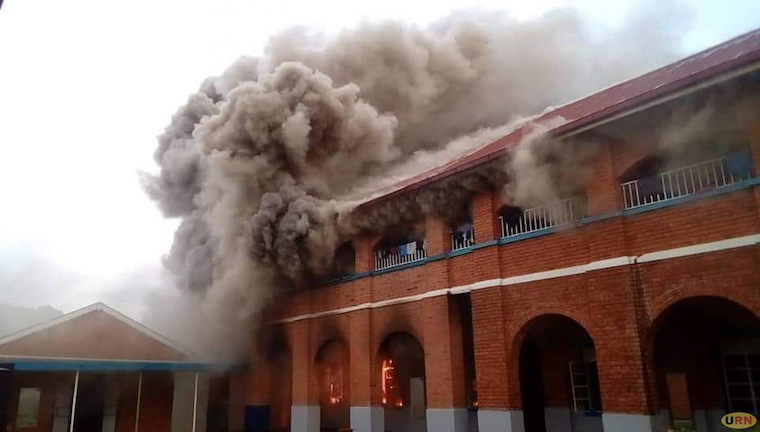 Smoke bellowing out of the girls dormitory

Fire has gutted a girl's dormitory at King’s College Budo in Wakiso district.

Eddie Ssewaje, the LC I chairperson of Nagalabi village and an eyewitness, says the fire started from the two-storied Grace House dormitory which hosts senior one and three students around 6:30 am this morning.

“We saw smoke coming out and we rushed to find out what was happening. We found the building burning. It was so frightening,” said Ssewaje.

Adding that the incident invoked the memories of April 2008 when fire gutted the neighbouring Budo Junior school leaving 19 pupils dead.

Luke Owoyesigire, the deputy Kampala Metropolitan police spokesperson, says that the students were attending lessons by the time fire broke out.

“There were no injuries or death recorded since the students had left for classes,” Owoyesigire said.

He says officers from the fire and rescue services have managed to put out the fire and are yet to determine its cause.

Several schools have been burnt down by mysterious fires over the years in the country. However, in many cases police have failed to release reports on the cause of the fires.

However, in many cases police have failed to release reports on the cause of the fires.!!

All these Fires are being executed at Orders from Above only in Buganda to Intimidate and Kill Baganda as Part of the Crushing Plan! Kale Kayihura and his Arson Squad are behind them!

Since Uganda became North Korea Where Folks are Collateral Damage to the Terror Regime, All kinds of Atrocities are Bound to be Committed to them !

Assassination Squads, Poison Squads and the Like!! The Country is a Failed State!..Ugandans and American Nationals are being Kept in Safe Houses on tramped up Charges!! Some being Raped and Sodomized on a Daily Basis..
Report to administrator