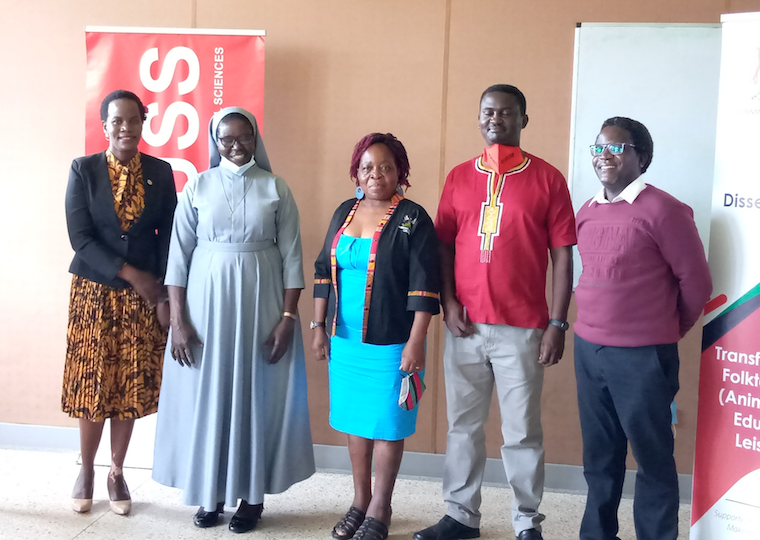 The reserachers pose with other stakeholders

Makerere University researchers in literature have started adapting Ugandan folktales into animations, with aim at reducing consumption of foreign material in teaching and exporting our heritage to a transnational audience, JOHN MUSINGUZI.

Prof Sr Dominica Dipio, the principal investigator, says the work was done from a multidisciplinary angle, involving literature for collection of material, philosophy to interpret deeper meanings, religion to accommodate spiritual sensibilities, and technology to do the animations, among others.

The project titled ‘Transforming Ugandan folklore into digital (animation) films for educational and leisure purposes’ was funded by Uganda government through the Makerere University Research and Innovation Fund (Mak-RIF).

The project aims to make digital animation of 10 popular Ugandan folktales from different regions across the country. They have started with four: Njabala from Buganda; Hidden Riches [sic!] from the West; Lia and Origa from the East; and Opiyo and Odongo from the North.

The project is using multimedia so as to reach and satisfy a wider audience; it will also make story books, audio books and an app about the 10 folktales. These products will be utilized in the teaching of languages and cultures in schools.

“Uganda is culturally the richest and most diversified country, such that it looks like all Africa exists in Uganda,” Nawangwe asserted as he thanked government for increasingly funding research at Makerere.

He also hailed Makerere for having undergone a revival to provide leadership in the country. He appreciated that CHUSS had displayed more energy and vigour than other colleges, as testified by the fact that he had commissioned more innovations from that college than other colleges, adding that the slogan, ‘CHUSS reloaded, rebranded CHUSS’ bears substance.

“Makerere is currently the second in Africa in doing research. The confidence of black people has been trampled upon for many centuries. We must prove that our culture is not inferior to anyone’s. We have here a high concentration of [great] brains; no one else, if not us, is going to do this [for us],” Nawangwe challenged.

They partnered Uganda Communications Commission, the United Nations Educational, Scientific and Cultural Organisation, the National Curriculum Development Centre and the ministry of Gender, Labour and Development.

Two animated films were screened: Njabala, about how to be a productive and lovable housewife; and Hidden Riches, about the great value in land or agriculture.

There was criticism from both the physical and virtual audience regarding the use of modern costumes and surroundings that may not resonate with the folklore tales or songs.

Criticism was also made why the films are in English instead of being in the original Ugandan languages with subtitles in English or any other international language. Also, the time length was criticized for being very short.