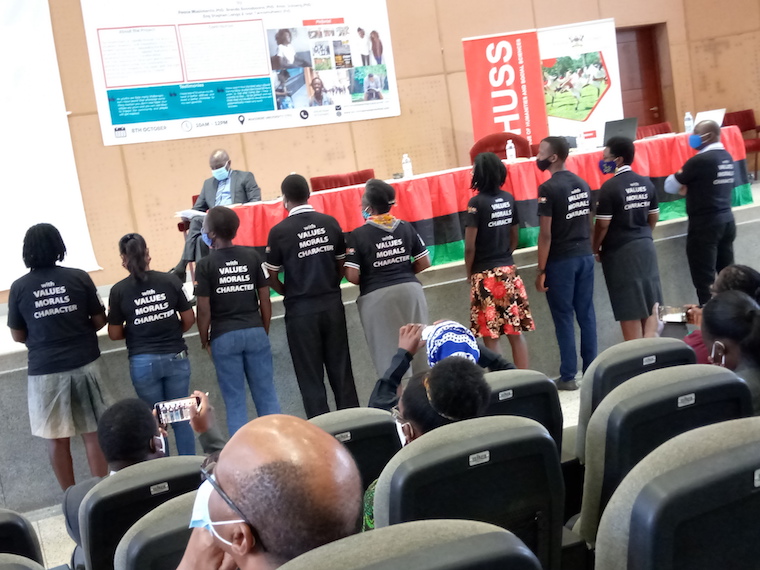 BANG peer educators in their T-shirts

Dissemination workshop on ‘Rebuilding moral infrastructure of the youth in Uganda: Nurturing a new generation for national transformation’ at Makerere University on October 8, 2020.

The research was funded by Uganda government through the Makerere University Research and Innovations Fund (Mak-RIF) and conducted under the school of Women and Gender Studies.

The team comprised Peace Musiimenta, the principal investigator; Dr Brenda Boonabaana and Dr Amos Ochieng both from college of Agricultural and Environmental Sciences; and Ivan Twinomuhwezi from Uganda Management Institute. They worked with a social innovator, Pastor Stephen Langa, the executive director of Family Life Network.

The research, done on Makerere University students, started in December 2019 and had gathered ample information by the start of the Covid-19-induced lockdown in March 2020.

Musiimenta said 91 per cent of their respondents confessed they are aware there is moral decadence going on. The research unearthed a a high prevalence of sexual harassment and sexual abuse; drug, alcohol and tobacco abuse; prostitution; gambling and sports betting; rape; sex for marks; having multiple girlfriends/boyfriends; clubbing and missing lectures and assignments; and pornography, even during lectures, among others.

Other findings include forced involvement and harassment by fellow students; direct discrimination and isolation of those with moral aptitude; lack of conducive environment for upright students to thrive; profound influence of the mass media; and temptations by global extremely rich influencers such as homosexual lobbies.

Other impacts include misuse of contraceptives, sexualization of everything, frustrations, stress, anxiety/depression and suicide. Others are destruction or loss of personal, university and third-party communities’ properties through violent strikes, bad publicity for the university and bad reputation for its graduates.

These in turn lead to high governance costs such as the high security deployments, more corruption, poorer performance and service delivery, and general reduction of moral standards for citizens.

Musiimenta noted that the fact that government is getting interested in moral education and support means there is serious moral decadence. The ministry of Gender nowadays provides parenting guidance, and it alongside some non-governmental organisations, the ministry runs shelter homes for victims of immoral actions.

Following the research findings, the research team and innovator formed Becoming a New Generation (BANG) as a tool to spearhead restoration of values, morals and good character among youth and participate in the building of a strong moral infrastructure in the country.

BANG is starting off with 10 trained peer leaders that will be placed in the nine colleges and the school of law apiece to set up BANG clubs. BANG clubs will also be opened in halls of residence. Langa said despite the interruption caused by Covid-19, they will continue to train more moral trainers, activists and counselors.

Musiimenta said under the project’s innovations, 500 (male and female) youths have already signed abstinence cards. A youth signs two cards, keeps one and gives the other to a mentor who keeps guiding and encouraging the youth.

She said that with more funds, they would carry out similar research in other universities, set up a parenting short course and establish a project that can help in addressing the moral challenges across the country.

The study recommends that students should not be blamed in isolation or as victims; rather, they should be befriended, look at their family backgrounds and the pertaining general social environment.  Also, effort should be made to involve everyone.