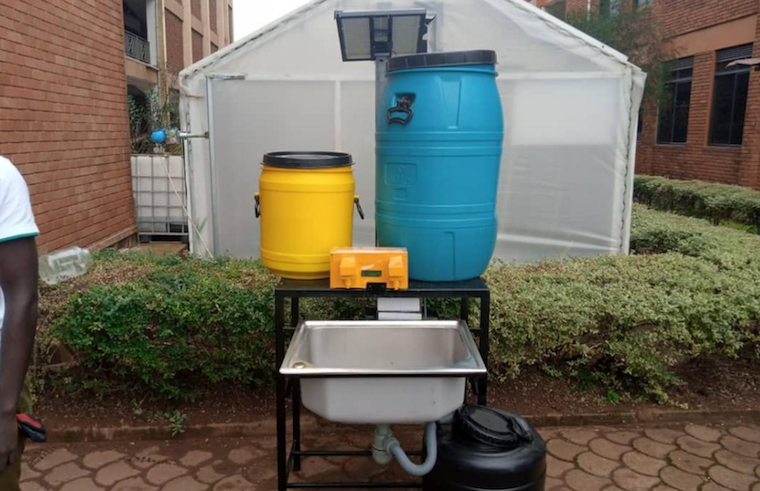 Students of Islamic University in Uganda (IUIU) have received a cash boost of $20,000 (about Shs 76 million) to scale the production of its solar powered hands-free handwashing dispensers.
The money was awarded to the university's research and innovations laboratory from the Islamic Educational, Scientific, and Cultural Organization (ISESCO).

The students developed the automatic water dispenser to promote handwashing as part of the preventive measures against the COVID-19 pandemic. Innocent Matsiko, a member of the innovative team notes that despite developing the prototype, they had failed to push forward their innovation due to funding challenges.

“Producing one unit can cost up to around Shs 120,000. So, we were able to produce a few units yet we wanted our innovation to have an impact in the communities. But with the funding we will be able to produce more and also look at how best we can improve on the innovation,” said Matsiko.

The university rector, Dr Ahmed Kaweesa Ssengendo, said ISESCO decided to fund the production of the dispensers considering their importance for distribution to selected public places including all IUIU campuses, hospitals, and public schools.

According to Ssengendo, with the current funding they intend to produce at least 100 units. The dispenser is fitted with motion sensor technology, water container and power source. It discharges water immediately when one moves their hands closer to the tap.

The innovation rotates around the idea of minimizing contact with potentially contaminated surfaces. Matsiko observes that besides, being used as a hands-free hand washing machine, the unit can as well be used for dispensing drinking water.

Derrick Mugerwa, a research associate, says after securing a grant they are now focusing on reducing the production cost. Other IUIU students are also working on other innovations including face shields and sanitizers. Although their face shields are yet to be assessed, their sanitizers product has already passed the National Drug Authority quality tests.