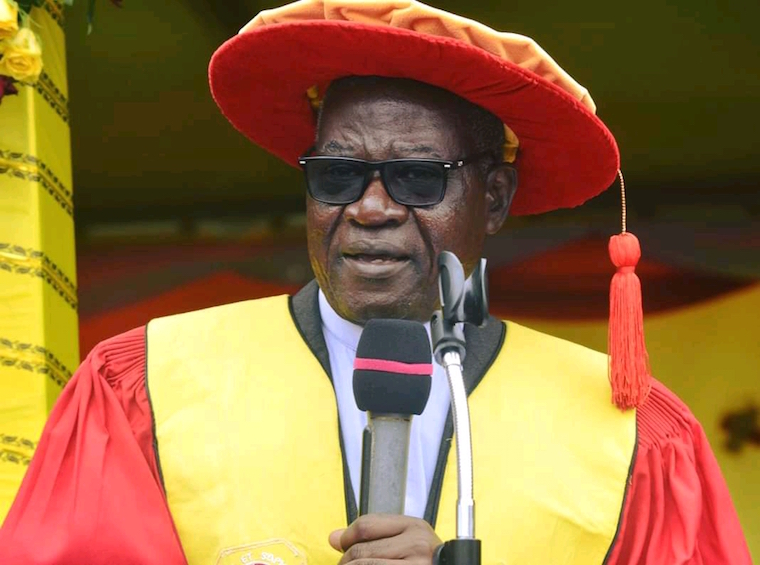 The vice-chancellor of Uganda Martyrs University (UMU) Prof John Chrysostom Maviiri has decried the high levels of environmental degradation taking place under the blind watch of the government.

Maviiri made the remarks while presiding over the university’s 25th graduation ceremony that was held at UMU's main campus in Nkozi Mpigi district.

“Am distressed by the fact that the government is not acting enough to put away the polythene which is destroying our environment: the law is in place but the implementation is not forthcoming,” said Maviiri.

Maviiri congratulated and awarded Mbitha Shimba as the youngest ever bachelor’s degree graduate from the university at the age of just 20. He also congratulated The Observer cartoonist Dr Jimmy Spire Ssentongo who was recently promoted by the university’s governing council to the rank of associate professor.

The bishop of Kiyinda-Mityana diocese, Joseph Anthony Zziwa who also doubles as the chancellor of UMU also vehemently condemned the people invading forests and swamps saying that it was just a recipe for disaster. “...environmental degradation is a major challenge and a sin against nature...” Bishop Zziwa said.

Bishop Zziwa also reminded the fresh graduates to use the acquired knowledge to fight for the rights of the voiceless and underprivileged at all times citing the unchecked rise in social evils such as child labour and human trafficking.

He said, “...individualism is taking root in Uganda. It threatens roots of our culture which advocates for unity...”

He added that graduates should not despise any kind of jobs because they come from Nkozi saying that Uganda does not need graduates that can articulate archaic theories but rather those that have the ability to create their own jobs.

This was premised on the fact that Uganda’s economy cannot currently absorb all the graduates from public and other degree-awarding institutions in the job market.

“You are going out as ambassadors to make a difference in the society," added Zziwa.

This year’s graduation was graced by the Papal Nuncio to Uganda His Excellency Luigi Bianco. Over 2300 graduates from different disciplines at postgraduate and undergraduate levels were sent to the job market.

0 #1 kabayekka 2019-11-19 10:37
These are the sort of African Chancellery that is suffering quietly as they pump out the young ones of this nation into the modern international job markets.

As this gentleman moans the degradation of the environment in his home country ending in disaster, he seems to hope that these young ones will immigrate to other better countries for lucrative employment and leave the miserable population of Uganda to continue suffering the misery of the environment of Uganda.

After having made good money from producing 2300 graduates, the total number of graduates in this country this year must be over 30,000. China alone has this year alone produced 30 million graduates. So how do these Chinese do it?
Report to administrator