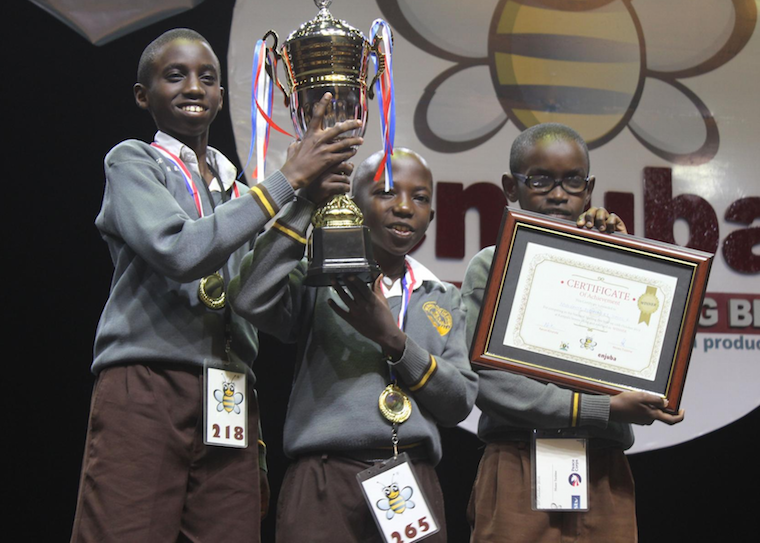 Pupils from Mugwanya preparatory school emerged the winners of the day

The winning team that consisted of four pupils emerged the best after scoring over 50 points during the finals of the competition that took place at Kampala Serena hotel on Saturday.

Mugwanya defeated the 2016/17 champions Hillside Naalya primary school and Parental Care primary school from Bushenyi. Aaron Kirunda, the CEO of Enjuba Spelling Bee says that the competitions are the most transparent sport.

"During Spelling Bee, everything is left in the open. The judges and audience all know what is happening because they all follow when words are spelt correctly or not," Kirunda explained.

Over 1,000 schools participated in this year's national competitions from different parts of the country. The winning team will represent Uganda at the African National Spelling Bee Championships next year in Nigeria. The team will also include pupils from Parental Care primary school that emerges as the first runners up.

Joseph Turibamwe, a pupil from Mugwanya preparatory who had emerged as the best two years in a row says that the win was exciting.

"I am very excited. I do not even have words but am happy. We worked very hard and I am excited to be going to Nigeria. It will be my first time to enter an aeroplane," Turibamwe said.

Samuel Masaba, a teacher from Komukuny Boys primary school in Kaboong district says that preparing learners to take part in a competition is time-consuming.

"We try and prepare them but it takes time. Finding time out of class and other school activities is the biggest challenge we face because there are so many things to do. But we try and meet at least three times a week," Masaba said.

Conrad Rusiimwa, a teacher from Mugwanya Preparatory school, says that preparation means they have to meet every day.

"We have set up a club at school and we encourage all interested learners to come and join. As a club, we meet every day to read and spell words. From this club is where we get contestants to take part in the spelling competition,"