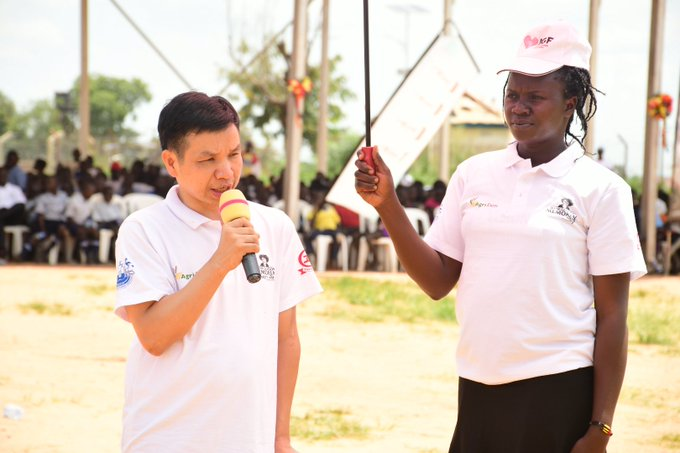 The Chinese ambassador to Uganda Zheng Zhuqiang in a speech read by Chen Huixin, deputy ambassador of the People's Republic of China in Uganda announced the opportunities during the 6th annual memorial service for Irene Gleeson in Kitgum Municipality on Saturday. Chen who represented Zhuquiang was the chief walker for Irene Gleeson Charity walk, an event organized in memory of the Australian national who touched Ugandan lives in a special way.

Gleeson is credited for supporting thousands of needy children with free medication, education and food, and extending psychosocial support to orphans, disadvantaged children and ex-child fighters across Acholi sub-region.

Gleeson lost a battle to cancer in July 2013. At the time of her death, she had started four primary schools and a technical institute, a faith-based radio (Mighty Fire FM), a Community Church and a hospital all under the founded the Irene Gleeson Foundation (IGF) umbrella.

The ambassador says that the offer for scholarship opportunities is in line with a commitment to building the capacity of Ugandan students and strengthening the China-Uganda diplomatic relationship. The scholarships will be offered for students who wish to study Bachelors, Masters or Doctoral Degrees in China.

The scholarships will cover tuition fees, basic learning materials, accommodation, living allowance, outpatient medical service and comprehensive medical insurance.  They will also cater for international airfare for the first trip to China and returning trip after completion of the study.

Chen says that the Chinese government has extended 1,200 short term training opportunities and 250 scholarships to Ugandan students over the last three years. Chen explained that China has been key in supporting Uganda’s health sector since 1986 citing the establishment of China Uganda Friendship hospital in Naguru, Kampala.

He adds that his government has also recently provided emergency assistance in Kasese district where an imported case of Ebola Virus Disease (EVD) was reported by the ministry of Health.

China is one of the biggest investors in Africa. And in Uganda, the bilateral trade and relationship between the two countries has grown tremendously over the years. Chinese investment in the country is estimated to be close to $3.4 billion.

The selection criteria was on merit and the need to improve human resource in the areas of Oil, Aviation, medicine and Army. List compiled by Okello and Musoke
Report to administrator
+2 #2 Jama 2019-07-22 19:24
Its an opportunity for thier sons and daughters.cousins, nephews,closest and distant relatives.Friends and tribesmen.

If your profile doesn't correspond to the mentioned criteria then you must belong to NRM or bribe your way through.

As for the rest of us, they didn't fight for us.
Report to administrator