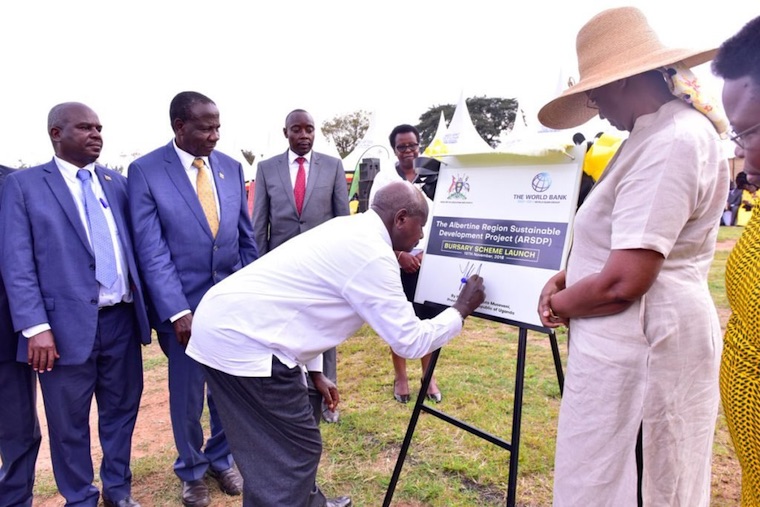 As Uganda waits with bated breath for its first oil drop in 2021, the education ministry is providing free training in oil-related fields to youths from the Albertine region.

Under the Albertine Region Sustainable Development Project (ARSDP), at least 600 trainees from 13 districts will be selected for skills training from accredited public and private institutions.

The bursary will cover tuition, and accommodation of students if required. Applicants must be Ugandan and have lived in the Albertine region districts of Nebbi, Nwoya, Buliisa, Masindi, Hoima, Kibaale, Kakumiro, Kagadi, Kyenjojo, Kabarole, Ntoroko, Bunyangabu and Kiryandongo for the past five years. Trainees not in receipt of other bursaries but with a minimum of an O-level, technical craft one and two or Uganda Vocational Qualifications Framework certificates are eligible for the scheme.

While officially launching the scheme at Hoima Boma grounds last Friday, President Museveni said beneficiaries will not only be skilled but also receive international certification. “Our children are going to get universal capability and they shouldn’t miss this chance.

“When the oil is finished, they can go and work somewhere else because they will be issued with international certificates in each area of expertise,” Museveni said. He added that through the scheme, more than 160,000 new jobs will be created mostly at levels two and three training to support the oil and gas industry.

Application forms will be picked at no fee from district education offices from November 19, 2018 to January 2019 while completed forms are expected not later than January 11, 2019 before 5pm.

Formulated in 2014, the ARSDP is a five-year $145m multi-sectoral project being funded by the World Bank and implemented by the ministry of Education, which has added $2m for bursaries. Part of the money will go to the ministry of Lands ($25m) and the Uganda National Roads Authority with the biggest share of $95m.

In her remarks, the Education minister, Janet Museveni, urged parents to encourage their eligible children to take this “golden opportunity” to acquire marketable skills that can help improve their employability and livelihoods.

She put emphasis on prioritizing girls within the region to benefit from the scheme.

“We would like to see that at least 40 per cent of the scheme beneficiaries are female. It has always been common practice in Africa to sacrifice the girl’s education and training in favor of boys under the guise of limited resources,” Mrs Museveni said.

She said institutions that will take up beneficiaries should produce relevant and competent graduates to not only take up the employment opportunities that will come along but also create others in a diversified economy of the region.

The president gave credit to Uganda Petroleum Institute-Kigumba (UPIK) that is set for its first graduation this month since inception in 2009 for offering diploma programmes in oil-related courses such as diplomas in Upstream Petroleum Operations, Downstream Operations, Instrumentation Technician, Mechanical Maintenance Technology and Electrical Maintenance (High Voltage).

“Some people wanted to make Kigumba a cooperative college but because I could look far, I rejected it and said let us make Kigumba a petroleum skills school so that we don’t miss on the oil jobs,” Museveni said, adding that if government is to set up a public university in Bunyoro region, it will be centered around UPIK’s specialised programmes.

Through the same project, the education ministry permanent secretary, Alex Kakooza, said they will also address the local content needs by upgrading UPIK and Uganda Technical College-Kichwamba into centers of excellence in oil and gas and construction courses respectively.

He said that government has, for instance, released funds to procure the oil rig simulator for Kigumba that was required for hands-on training of students. “The oil and gas skills training require international accreditation and certification, unlike other skills training we have been handling.

Meanwhile, the development of an institutional development plan for a new institute targeting agro-processing in Nwoya district is underway. This, according to Kakooza, will support the oil and gas activities in the Albertine region to foster reasonable economic growth among the populace.

Meanwhile, Enoch Semutumba, the head of Instrumentation department at UPIK, commended government on the oil initiatives but called for an extension on the bursaries to students.

“This is a worthy initiative… but according to the Industrial Baseline survey, the workforce skills needed from the technical schools is 15,000.

“Now, if you are talking about training 600 only, in the regions of over 1,000 people, government needs to think twice,” Semutumba said. Since institutions are training with international companies, he feels there is need to support more Ugandans in technical fields.

Currently, Semutumba told The Observer most specialised courses here are dominated by Kenyans, Ghanaians and Nigerians.

Kakooza agreed that the 600 bursaries are too low but it is for a start. “Our initial worry was whether they can fill all the vacancies. But let’s see how it progresses; if we feel the demand is still there, government will see what to do.”