Why should you read Mohinder Dhillon's autobiography My Camera, My Life? Dhillon is one of the most remarkable men you have never heard about. His life reads like an adventure story.

Here is a man who was born in India in 1931, made his name in Africa in the 1960s, and was successful enough to be on first name basis with world leaders in Europe in the 1980s.

Dhillon's life and achievements are more astonishing when you realise that he did all this with very little formal education. He failed his Ordinary Level exams and stumbled into a journalism career after his father fortuitously bought him a second hand Box Brownie camera in 1948.

Dhillon did not even intend to become a photojournalist. His ambition, at the beginning, was to be a successful studio photographer.

He wanted to make enough money to earn a living so he did not continue to drain the meagre resources of his struggling father who was a clerk in the East African Railways and Harbours Corporation. The third born of seven children, he was terrified of bringing disgrace to the family by failing to earn his own upkeep. 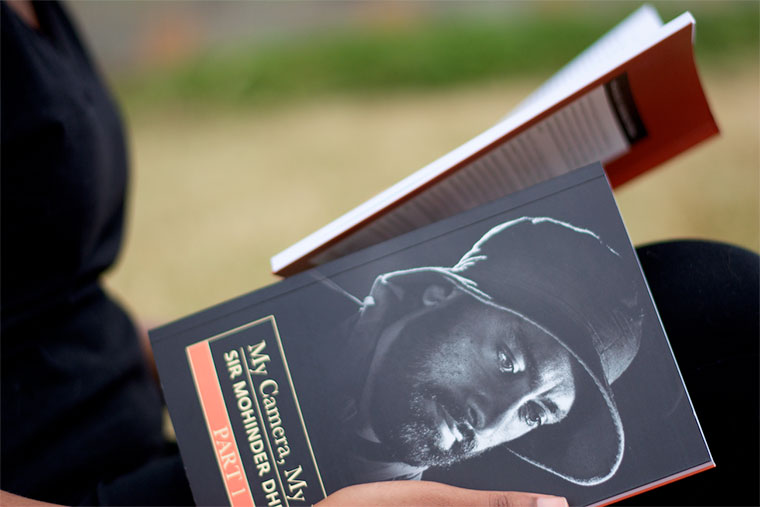 His father Tek Singh had left their tiny, poverty stricken village Babar Pur in India in 1918 at just 17 years old for Africa to work on the East African railway.

He had arrived with nothing in his rags at Mombasa, Kenya; slept on Sikh temple verandas, and worked for twenty-nine years before he could afford to send for his growing family to live with him in Nairobi in 1947.

Sikhs by faith and a very tightly knit family, men were expected to go out and fend for their families. Dhillon was haunted by the sacrifices his father, uncle and female relatives had made.

He refused to fail. Employed by Halle Studio in 1951, this school dropout without formal photographic training would buy out his employer in three years.

And then Dhillon was off! For the next forty-seven years, Dhillon was at the scene of most historic events in Africa and some of Asia's and Europe's. He filmed the painful emergence of Kenya from British colonial rule in the 1950s.

Dhillon filmed and photographed the start of Ugandan president, General Idi Amin Dada's rule in Kampala in 1971. He also filmed Amin's downfall in April 1979, actually witnessing his desperate last flight out of Uganda forever from Jinja in a Libyan Bell twin-jet helicopter.

In between, Dhillon got close enough to Amin to end up liking the man personally even as he reported on the murders committed in his name.

Dhillon's book, published in 2016, is one of the few on record that admits to the role of foreign media in crafting Amin's lasting image as the ogre of Africa. Dhillon is fascinating on Amin. Scholars of this unforgettable African leader will find My Camera, My Life invaluable.

But Amin is not the only African president Dhillon had extensive contact with. He was once the official photographer of Ethiopia's last emperor, Haile Selassie. Dhillon's Afripix Company (as he had renamed Halle studio in 1961) would document Selassie's international travels from 1966 to the meek dénouement of his reign on 12th September 1974.

Dhillon writes of Ethiopia with more fondness than many other countries he reported from. The graciousness and suffering he witnessed in an Ethiopia continually wracked by famines and drought would crack through his journalistic impartiality.

Dhillon was one of the several journalists to report consistently on Ethiopia's devastating 1980s famine. Their combined journalistic efforts would result in a global movement in 1984 to fundraise for Ethiopia's famine relief.

Nineteen years later, Dhillon would receive a knighthood with the title Sir from the Imperial Ethiopian Order of Saint Mary of Zion in 2005. The award came four years after his retirement from active journalism in 2001 at seventy.

My Camera, My Life by Mohinder Dhillon is an invaluable book. Beyond a memoir of Dhillon's own very adventurous life, My Camera is an eyewitness account of some of the 20th century's most significant historic events. A student of Africa could not find a richer resource.