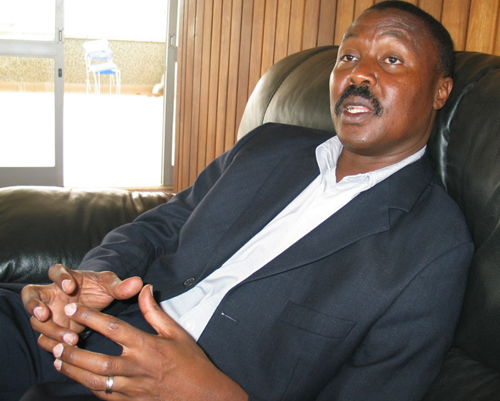 Maj Gen Gregory Mugisha Muntu, 54, finally made it to the apex of opposition politics after winning a closely fought election to become president of the Forum for Democratic Change (FDC), replacing the inspirational Dr Kizza Besigye who has been at the helm of the party since it was founded in 2005.

Edris Kiggundu looks back at the political and military career of the new FDC leader.

For a man who has kept a low profile and led from behind most of the time, Thursday’s victory thrusts him right into the public spotlight. Many are fooled by his outsized easy-on-the-eye character into thinking that the general is a soft man but his close watchers tell the story of a strong willed and principled man.

Early in 2005, when the then nascent FDC was opening a party office in Gulu, a couple of gunshots rang out nearby as the party officials prepared to book accommodation at one of the town’s decent hotels. Scared, many party officials, including the late Dr Suleiman Kiggundu, then party chairman, scampered for cover at the reception.

One official stood still and appeared unfazed. It was Maj Gen Mugisha Muntu, the party’s secretary for mobilisation. An official who was there remembers Muntu telling his visibly frightened colleagues: “When you hear the sound of a gunshot, you know [that bullet will not hit you].”

“The bullet that hits you in many cases you do not hear it.”

This episode points to Muntu’s often hidden brazen inner character. Beneath that boldness, there’s also Muntu the introvert politician, who regularly keeps to himself and whose political style, some people say, would thrive well in developed democracies where politics is played by the rules and where there is no shortcut to success.

Over the years, FDC has taken the fight to the ruling NRM. It has led demonstrations against NRM’s excesses, which have earned the party’s long-serving leader, Besigye, a badge of honour as President Museveni’s most ferocious opponent in the 26 years of his rule.

As Muntu steps into the retired colonel’s seemingly oversize shoes, it will be interesting to see whether he will maintain the party’s confrontational style or alter its DNA and give it a new identity altogether. Muntu’s reluctance to get soiled in our muddy political waters has earned him criticism from some party faithful who believe FDC must be militant to succeed.

In the campaigns, his main opponent, Nathan Nandala-Mafabi, often projected him as an armchair leader who kept away from the running battles with police. Yet there are others who feel it is people like Muntu who can bring sanity and respect to our politics.

In fact, some people have suggested that with Muntu at the helm, people who were long disenchanted by the militant antics of our local politics might be lured back into the fold.

Muntu, however, has his work already cut out for him. The campaigns for the party leadership have left the party fractured. He needs to heal the rifts and unite all the supporters. Then he has to rejuvenate the party ahead of the 2016 elections.

Born in 1958, in Kitunga, Rwashamaire, in present-day Ntungamo district, Muntu is the son of the late Enoch and Aidah Muntuyera. He came third in the family of four children. Muntu grew up in Mbarara where the family settled after his father was appointed minister of Education in the Ankole Kingdom government. He had his primary education at Mbarara Junior School.

Those who know him back in the day, say Muntu was a reserved and unassuming child who rarely ventured beyond the vast compound of his father’s house.

“He always kept to himself and did not play much with other children,” said Emmanuel Katatumba, 70, who lives barely a kilometre from where Muntu was raised.

For his secondary education, Muntu joined Kitunga High School (since renamed Muntuyera High School, after his father) where he sat his O-levels. Here, he distinguished himself as an athlete, particularly in the sprints (100m and 200m), according to Katatumba. Muntu never showed a particular liking for politics at the time though he grew up in a political family that supported the Uganda People’s Congress (UPC).

It was at Makerere University, which he joined in 1978, where his political consciousness was awakened. At the university, he joined Maj Gen Jim Muhwezi, Brig Henry Tumukunde and Besigye to mobilise against the murderous regime of Idi Amin. He later served as Vice Guild President.

During his student years, Muntu lived with his elder brother, Herbert Nuwagaba. The general is said to have loved his mother Aidah Muntuyera so much that her death in 2007 left him devastated and made him even more irregular in Kitunga, according to neighbours.

Today, colleagues say Muntu has little attachment to his village. His house atop Kitunga hill, which he started building shortly after he was dropped as army commander in 1998, remains incomplete, marooned in an overgrown bush. One neighbour told The Observer that Muntu once told him that he would have completed the house in less than a year “if he had stolen (money)” while still serving in the army.

However, in its current shell state, the round-shaped three-in-one house, still looks grand. His late father’s house, built in the 1940s and surrounded by eucalyptus trees, looks abandoned, with paint peeling off. When The Observer visited recently, two kids played about in the compound, oblivious of its historical importance.

Like a rope, Muntu’s feeble-like appearance could lead someone into thinking he is weak. Indeed, at a personal level and in public he comes off as warm, very welcoming and less confrontational than Besigye. Yet beneath the warmth, there’s another persona. When angered it is advisable to keep a safe distance.

“He starts shaking and you start to imagine what he is going to do next,” said one party official, who asked to remain unnamed. In fact, some people say he is tougher than Besigye only that he is better at concealing his emotions.

Muntu shares a lot in common with Rwanda President Paul Kagame, with whom he served in the Directorate of Military Intelligence soon after the NRA took power. Like Kagame, he is so principled and rigid that he seldom changes his position, however unpopular it might be.

Joining the NRA is a case in point. Coming from a prominent UPC family, it was embarrassing when Muntu decided to join the NRA. His father, Enoch Muntuyera, was not only a party stalwart but also a close confidant of the late former president, Dr Apollo Milton Obote. Some elders tried to dissuade him to no avail.

“He felt the sense of injustice and unfairness in Uganda was too much that Obote’s government had to be rooted out of power at whatever cost,” Katatumba said.

When his father’s remains were brought back to Uganda from Kenya in 1984, Obote, who was chief mourner at the reburial ceremony, urged Muntu to come back home.

“He [Muntu] is our son so we must not allow him to go astray,” Obote said, according to people who attended the function. Obote also used the occasion to rename Kitunga High School as Muntuyera High School in memory of Muntu’s father.

In the bush, Muntu worked mainly as an intelligence officer but occasionally went to the frontlines where he distinguished himself as a good fighter. In one battle, he was shot in the chest and almost died. He was later sneaked into Mulago hospital where the bullet lodged in his chest was removed.

Undeterred, he returned to the bush when he recuperated. He could have used that opportunity to abandon the war, but he did not. This earned him the respect of his colleagues, especially Yoweri Museveni, his leader. In the bush and in the army, Muntu is said to have had no real close friends.

“He was abnormally disciplined and would not entertain the nonsense of sneaking out of the bush to go and drink,” said Brigadier (rtd) Andrew Lutaaya, one of the 27 men who launched the bush war in 1981.

In 1989, at a relatively young age of 31, Muntu became army commander. His appointment shocked but did not surprise many who had fought alongside him in the bush. He immediately encountered two challenges. First, there were no structures in the army, which was a catalyst for indiscipline. Secondly, some officers saw him as too young to lead.

To his credit, Muntu managed to establish a few structures to check the excesses of some senior officers. One of his victims was Col Drago Nyanzi whom he arrested several times for engaging in robbery. Muntu also engineered the demotion of the late Reuben Ikondere from Lt Col to Major and later detained him at Makindye Military Barracks for insubordination.

Yet he is accused of being aloof while serving as army commander. Some say, while he was good ideologically and administratively, Muntu was not a friendly person who could mix with his foot soldiers. He rarely attended social events, apart from formal state functions where his presence was needed.

His relationship with President Museveni as army commander was like that of father and son, according to an FDC official who retired from the army.

“Museveni constantly listened to him and appreciated his view points but never really ceded control of the army to him,” he said.

He was at the helm of the army when the Mukura massacre happened in 1989, claiming 69 people who were suffocated to death in a train wagon. Those who know him believe he regrets the incident.

Today’s victory offers him another type of challenge. It will not be easy, but as one person put it, Muntu is like Kahinda Otafiire and Ruhakana Rugunda rolled into one. He can get tough if things are not moving the way he wants but he can also employ the smooth talking skills of a diplomat when the situation demands so.