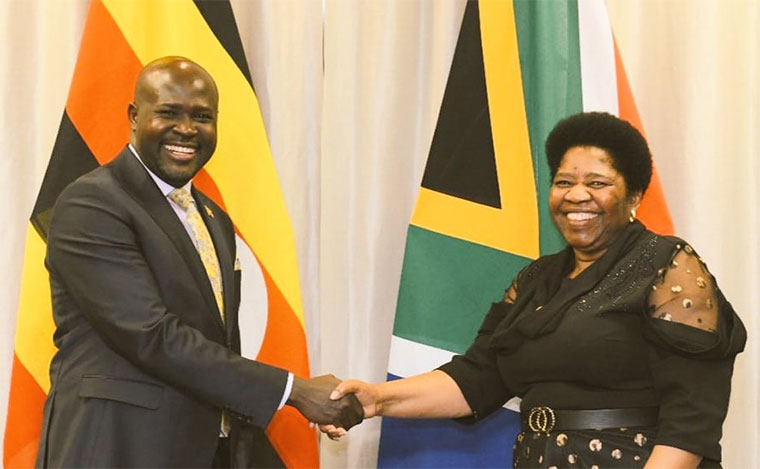 Uganda and South Africa have called for the bolstering of trade and investment between the two countries.

This was reached at on September 16 during a high-level meeting between Paul Amoru, Uganda’s high commissioner to South Africa, and Mashego Dlamini, South Africa’s deputy minister of International Relations and Cooperation in Pretoria.

They noted that there is need to address all challenges that may hamper expansion of cooperation and that the way forward is to implement all signed bilateral agreements, review dormant ones as well as explore new areas of cooperation.

Amoru expressed that he will focus on economic and commercial diplomacy aiming at further boosting trade and investment between the two countries. He, however, noted the unfavourable balance of trade position in favour of South Africa and thanked his host for the commitment to open its markets to Ugandan products and services.

“I am glad South Africa has accepted the resumption of Uganda Airlines commercial direct flights to Johannesburg which in turn will boost trade and deepen the people-to-people relations and cooperation,” he said.

Amoru also used the opportunity to seek South Africa’s support for Uganda’s candidature for re-election to the International
Telecommunications Union Council for the period 2022-2026 at an election scheduled during the Plenipotentiary conference from September 26 to October 14 in Bucharest, Romania.

On the other hand, Dlamini observed that South Africa is equally encouraged by Uganda’s active engagement to strengthen bilateral cooperation with other countries. She noted that together, Uganda and South Africa can exploit new opportunities presented by the post- Covid-9 pandemic globally.

She further advised that strong bilateral relations between African countries and regional economies is essential to the realization of the ideals of the continent’s development Agenda 2063.