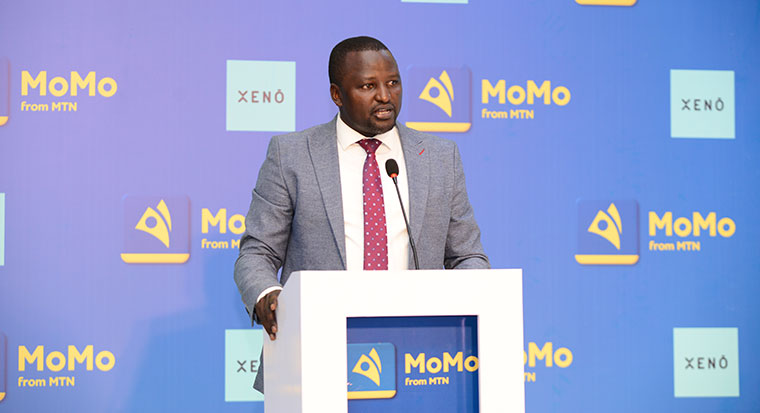 MTN Uganda has announced a new partnership with Xeno, a licensed fund manager and collective investment scheme manager by the Capital Markets Authority (CMA) to offer goal-based savings and investment for individuals and institutions.

Speaking at the launch of the partnership held at the MTN headquarters in Kampala, Richard Yego the managing director said the event was a form of celebrating Ugandan innovations & entrepreneurship. He added that it underpins MTN’s commitment to leading digital solutions for Africa’s progress.

“This new partnership with Xeno is aimed at growing financial inclusion. In our quest to provide leading digital solutions, we believe this partnership shall help grow domestic savings in Uganda. This shall eventually contribute to sustainable growth in the country”.

The partnership between MTN MoMo and Xeno shall allow individuals to be able to use the MTN MoMo platform to set up their investment accounts, top-up their accounts, and track their Xeno accounts, with ease. Investments can be done through the widely used MTN MoMo platform or the USSD code *165*5*7# for non-smartphone users.

Moses Tumwebaze a loan officer with Blue Crystal Sacco an investment group fund said Xeno had helped them to invest money that was always idle on accounts.

“Before we met Xeno, we used to have a lot of money sitting in the (bank) account, but we did not have any returns on it. When we came to know about Xeno, we had all the extra money put into it as an investment and we would get huge returns on it. It was very easy to register, and we could access our funds at any time. We hope in the future to continue investing with Xeno because the returns are really good.”

Speaking at the same function, deputy governor Atingi Ego applauded the two companies for the partnership reached towards improving financial penetration in the country. Atingi reminded MTN and Xeno about the need for beefing up technology to protect user data and resources in the wake of growing cyber threats by hackers and other acts perpetrated by fraudsters.

He also used the opportunity to re-echo the commitment of the Bank of Uganda to addressing inflation below five percent within the short run. Atingi said the inflation had been caused by external shocks like the war in Ukraine which had affected supply and the prolonged drought in Uganda which had affected farm output.

Aeko Ongodia, the founder and chief executive officer at Xeno noted that only 10 per cent of the Ugandan working population have a basic investment account (through retirement schemes such as NSSF and other occupational schemes).

He further lamented that outside of retirement accounts, less than 0.2 per cent of Uganda’s labour force has a formal investment account that can grow their savings to help them achieve their financial goals. Until Xeno came along, no fund manager was focused on designing products for the average person, something that has adversely affected the country’s saving culture and inevitably, their personal and national economic growth at large.

“Xeno is therefore partnering with MTN in a bid to extend its much-needed investment management services to more Ugandans to enable them to save and grow their finances with a trusted and secure service provider,” Ongodia said.

According to Ongodia, Xeno receives money from various members of the public and invests it on their behalf in carefully selected asset classes across the East African region using Xeno’s unit trust funds.

Xeno currently manages four unit trust funds: Xeno Uganda Money Market Fund, Xeno Uganda Bond Fund, Xeno Uganda Domestic Equity Fund, and Xeno Uganda Regional Equity Fund. Investors earn a return on their money per year depending on the performance of the underlying assets. However, Xeno does not offer loans and credit services, as it is a fund and investment service provider and not a bank.

As of June 30, 2022, Xeno had over 20,000 users registered on their platform and these had collectively invested over Shs 40 billion towards their goals.