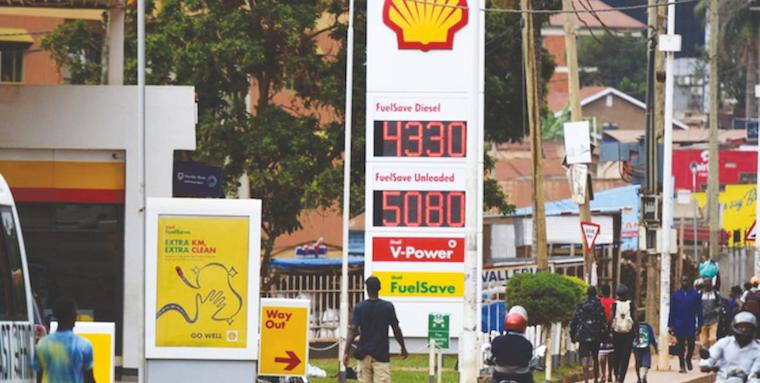 Prices of fuel have continued to shoot up

Fuel prices in Uganda have shot through the roof, creating misery among consumers and completely reversing the trend where diesel was traditionally thought to be a lot cheaper than petrol. Now the two products are selling for nearly the same price.

At Namanve in Wakiso district, the price of diesel at one of the Shell stations is Shs 5,340, the same as petrol. Just across at Total, diesel is quoted at Shs 5,300, while petrol is being sold at Shs 5,370. Ugandans are growing impatient, demanding to know what interventions the government has to correct the situation.

“I never imagined that one day the price of diesel would be the same as petrol, but here we are,” one of the male pump attendants at Shell station exclaimed.

The price of fuel has been unstable since last year. In January 2022, the price rise was escalated by a stand-off between truck drivers and officials from the ministry of Health over mandatory Covid-19 tests. The standoff created a full-blown fuel crisis, one whose effects can still be felt up to today. Petrol, which was quoted at Shs 4,450 in October last year went up to Shs 5,000, while diesel increased to Shs 4,800 from Shs 3,999.

In 2021, sector players attributed the rise in fuel prices to the effects of Covid-19 pandemic on the supply chain, the resurgence of the global demand and new tax regimes in East Africa.

The standoff in January, however, sparked off a chain of events that culminated into the increase in the general prices of goods and services. Even after the standoff ended and all the trucks that had been parked at the border started to move, the fuel prices didn’t drop.

When questioned what the motive was for keeping the prices high after the standoff had ended, fuel companies argued that the oil tankers had incurred costs and that they had to recover their investment. The price, they argued, would stay up to allow the fuel companies recoup their costs.

In the middle of March, following a fuel shortage in Kenya, fuel prices went up again. The shortage in Kenya did not directly affect the supply of fuel in Uganda but provided a ripple effect in the country. Olivier Gatera, the country manager of Rubis Energy Uganda, while launching a new station in Wandegeya, a Kampala suburb, brushed off the effects of the then Kenyan crisis on the supply of fuel in Uganda.

“Rubis has deposits in Kenya and in Uganda. We have a dedicated storage of reserves to support us and all the deposits combined can cover up to three months.”

Although the Kenyan crisis affected the price at the pump momentarily, the increase didn’t come as a shock to many Ugandans, considering the trend can be traced back to as far as July 2021. However, it still reflected in the day-to-day lives of Ugandans as it led to a further increase in the prices of commodities.

Sumaya Nangobi, a mother of five who resides in Mutungo, a Kampala suburb, says the high prices of commodities dampened the recent Eid celebrations.

“We usually slaughter both chicken and goats for Eid but we couldn’t this year. We only opted to buy meat from the butcher at Shs 14,000 a kilo. We didn’t even fry the food; we opted to boil it because the price of ingredients is too high,” she said.

A visit to Bugolobi market confirmed Nangobi’s claims. At the market, one tomato costs Shs 500 and yet at the same price one could previously get three.

Clement Ssempala, a resident of Kireka, says many Ugandans are suffering in silence because of the ever-increasing prices of fuel and other commodities. He says without government intervention, many people might have to readjust their ways of life to survive.

“Since the price of fuel went up, I stopped using my car every day. On some days,I park it and use a taxi to go to work. While I find my car convenient, it has become a bit expensive for me to use daily. So, to save costs, I leave it at home sometimes.”

According to information from the Uganda Bureau of Statistics, cooking oil has registered the highest price rise of 21 per cent between December 2021 and February 2022, and a 77.6 per cent increase in the past one year.

As a result, the consumer price index – a measure of the difference in the prices of goods and services - for February increased from 3.2 per cent to 4.9 per cent in April.

Matia Kasaija, the minister of Finance, said government is looking for solutions to ensure that price increases are not erratic but gradual.

“Government is not sleeping. We are looking at all sorts of ways to make sure that we control the situation,” Kasaija said.

He added: “Even if I had to reduce some taxes, we have got international global factors, which are beyond our control. You won’t see prices coming down. Removing taxes is a double-edged sword and I can tell you it might not ultimately bring down the price.”

Manufacturers, on the contrary, believe that the price surges are as a result of the new tax proposals that government intends to introduce.

Daniel Birungi, the executive director of Uganda Manufacturers Association, reechoed the role the new taxes are playing in flaring up inflation.

“The 10 per cent tax duty introduced on crude palm oil has increased the cost of production of soap and cooking oil. Manufacturers almost pay 30 per cent of their annual budget in taxes. This aggressive taxation hits their cash flows and hits the ability of manufacturers. Away from this, the costs of transportation have increased. Eventually, the manufacturers have to pass these costs onto the final consumer,” he summarized.

+1 #1 Lakwena 2022-05-13 18:47
At this rate of indifference and non-intervention by the captured state, after Gen Tibuhaburwa on 26 Jan 2017, told off Ugandans and whoever cared to listen that he is neither their servant nor employee; who can still deny that Uganda is a Shauriyako (To Whom it May Concerned Republic?

In other words, it is only criminals who are least concerned for others, and which is why causing harm or suffering to others is no big deal.
Report to administrator
+1 #2 P. Goldberg 2022-05-16 20:10
Its not a surprise that prices are going up and no
intervention is being done.

Who are the people benefiting from the increase in commodities prices if not the very people who are making the money. The next thing will be ministers and MP salaries increase. I bet you on this. Mark my word. Good luck to Uganda
Report to administrator