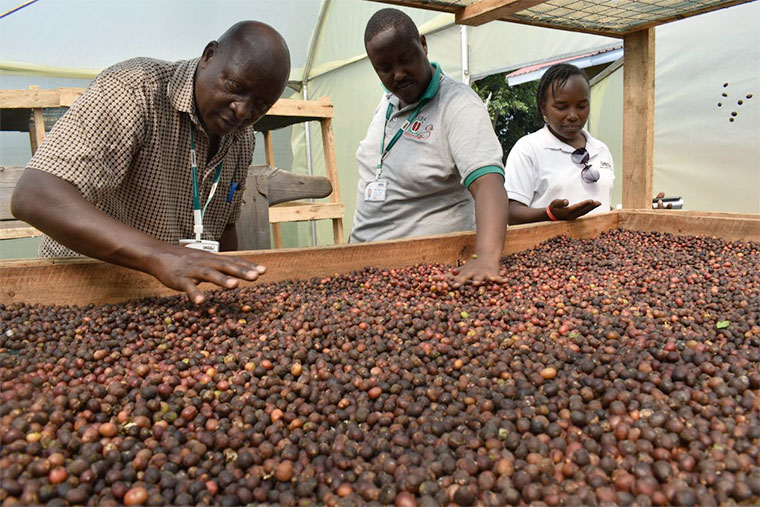 The government’s coffee agreement signed with Italian business lady Enrica Pinetti has caused an uproar within the country.

The suspicious multi-billion coffee agreement was signed between Finance minister Matia Kasaija and Enrica Pinetti, the owner of Uganda Vinci Coffee Company Limited (UVCC). The contents of the contentious February 10, 2022 agreement were witnessed by Ramathan Ggoobi, the permanent secretary and secretary to the Treasury, and Moses Matovu the UVCC company secretary.

Immediately the agreement found its way into the public, opinion has been split, with many doubting the intentions and legality of the “all generous coffee deal.”

Sections three and four of the agreement reek of favouritism and conceit on the side of the government. Several unprecedented concessions on tax, social security, and provision of priority supply of 60,000 tonnes of Uganda’s coffee beans to UVCC were made.

The 10-year concessions shall be effected when the company goes commercial. Under section four, the government of Uganda agreed to support the implementation of the project through the provision of total tax exemptions and the freedom not to pay social security for the staff employed.

In subsection 4.1.1, “The Government of Uganda hereby agrees that it shall ensure the company undertakes the operation of the project on a tax neutral basis with the effect that it shall be entitled to all tax exemptions available under the laws of Uganda. The exemptions referred to in this paragraph shall extend to taxes and impositions applicable to all activities of the company and its foreign staff except in respect to the export of green coffee beans.”

Under subsection 4.1.2, the government commits the Ugandan taxpayer to bear the cost of taxes in an event where the law prohibits tax exemptions or it is inadequate to provide the company with comprehensive relief from taxes or other impositions.

In subsection 4.4.2; UVCC commits to pay for the priority supply of superior quality coffee beans at a premium price to be determined by UVCC but, in any case, not below the price approved by the coffee regulatory authority, UCDA.

In an interview with The New Vision, Uganda’s Attorney General Kiryowa Kiwanuka said the contract was legal because it had not breached any laws of the land, which had prompted him to clear it.

Subsequently, Francis Atoke, the solicitor general, distanced himself from the controversial agreement. In an interview with Daily Monitor, he said “I have never seen it [agreement].”

Article 119 of Uganda’s Constitution empowers the Solicitor General to review and clear contracts and agreements. Speaking to The Observer, Wilfred Niwagaba, the shadow Constitutional Affairs minister and Ndorwa East representative, said although the agreement did not breach any laws, the agreement was wrong in procedure and had not been drafted in the interest of Ugandans.

Niwagaba added: “The agreement does not meet the basics of an agreement. The agreement did not have any representatives from the entire coffee chain. Did you see any coffee farmers or manufacturers there? It does not move at par with the National Coffee Act of 2021. A whole agreement has been made to create a monopoly over coffee with someone that promised an international specialized hospital that we have never seen to date.”

In an interview with The Observer, Mary Sserumaga, an independent policy analyst, wondered why Bugisu Cooperative Union would be preparing to file a suit to challenge the agreement in court if it had been drafted in the interests of the local farmers.

She said: “Under the Uganda National Coffee Strategy 2040 Plan for 2015/16-2019/20, it is the policy of the Uganda Coffee Development Authority to reduce smallholder coffee-growers from 80 per cent to 25 per cent by 2040. This can only be done by aggregating smallholder farms. That can only be achieved by forcing smallholders out of business.”

She explained that “our farmers already struggle to get access to farm inputs. Vinci will now have the advantage of being immune to taxes. This will mean the smallholder will not be able to compete. Cooperatives used to address the issue of affordable inputs. If farming becomes unprofitable, smallholders will end up as labourers either in urban areas or on large-scale farms. The debate about the revival of cooperatives was never concluded and they were not assisted. Vinci is being financially enabled despite its lack of experience in penetrating new coffee markets. Previously, these were tasks of the cooperatives. If the inexperienced Vinci is trusted to ‘learn on the job’, surely Ugandan cooperatives can do the same...” she added.

Finance Permanent Secretary Ramathan Ggoobi dismissed any claims of creating a monopoly, saying: “How can you create a monopoly when the plant is going to utilize only 6.4 per cent of the Uganda coffee production? Ggoobi justified the highly contested incentives by arguing that “it will be inconceivable for Uganda Vinci to set up shop and not provide it with some comfort for it to access the raw materials required.”