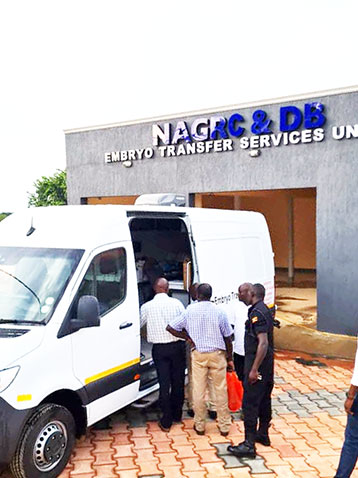 As the animal breeding sub-sector looks forward to the new year, 2021 saw the rise of community-based breeding initiatives as well as the revival of government farms and ranches under the National Animal Genetic Resources Center and Data Bank (NAGRC & DB), the government agency mandated with establishing, developing and promoting livestock breeding structures. DAVID MWANJE reviews the NAGRC&DB 2021 report card that was released on December 28 in Entebbe.

Investment in the livestock sub-sector is greatly rewarding in Uganda but it is also costly and risky because not only does it take years to reap from the venture, a contagious viral disease can wipe out an entire kraal of cattle in just days.

However, the negative dynamic to it changed in 2021 with the revival of government farms and ranches under the National Animal Genetic Resources Center and Data Bank (NAGRC & DB), the government agency mandated with establishing, developing and promoting livestock breeding structures.

So, as part of the mandate to establish, develop and maintain well-managed centre farms and stations through professional and technically sound farm management practices, NAGRC & DB’s revival of the farms has provided renewed hope for farmers to not only acquire the best breeds but also learn the best farming practices.

“Conservation programs for indigenous local breeds as well as community animal breeding programs are now fully functioning and the stakeholders are energized about the current performance,” he says.

What this means is that farmers now have an opportunity to acquire the best breeds in cattle, goats, sheep or even chicken from NAGRC & DB at a very low cost and in return, they are provided with the technical knowhow of managing the stock in order to get the maximum productivity.

According to the NAGRC&DB 2021 report, the revival of the ranches is the backbone of Uganda’s drive to achieve NDP III goals due to its capacity to create opportunities for foreign markets.

The most important aspect is that conservation programs for indigenous local breeds as well as community animal breeding programs are now fully functioning and the stakeholders are energized and excited about the agency’s current performance.

As a result, many farmers have greatly benefitted through acquisition of top breeds of cattle that are not only resistant to diseases but also provide high yields.

Being one of the government agencies implementing agro-industrialisation programme in the third National Development Plan (NDPIII), NAGRC&DB majorly contributes to the programmes of agricultural production and productivity, with the objective of increasing production and productivity as well as that of coordinating and managing agro industrialisation, with the objective of strengthening the institutional capacity for agro-industrialization.

This increase has been as a result of enhanced community-based breeding initiatives, new synchronisation protocols with better conception rates, increased availability of liquid nitrogen which has boosted the use of artificial insemination countrywide.

On the other hand, programme coordination and management greatly improved because from the stakeholder groups empirically sampled, satisfaction with NAGRC&DB products and services improved from 76 per cent in financial year 2019/20 to 81 per cent in 2020/21 financial year, thereby superseding the target of 80 per cent.

During the financial year 2020/21, NAGRC&DB embarked on the establishment of the embryo transfer services unit for last-mile delivery of superior animal genetic resources.

The unit has since been equipped with a mobile laboratory. This mobile laboratory is to aid in embryo transfer, field semen collection and evaluation of semen dispatched to artificial insemination technicians at the parish level.

In the same vein, a total of 1,248,000 against a target of 1,000,000 chicks were hatched off the NAGRC&DB hatcheries and distributed to farmers countrywide. This performance is attributed to increased egg production from two multi-purpose scavenging poultry breeds (Kuroiler and Rainbow rooster).

In the same financial year, the entity procured a total of 43,200 parent stock for multiplication and availing to farmers countrywide.

This will boost artificial insemination and synchronisation activities on and off NAGRC&DB centre farms. Meanwhile, the entity managed to complete and operationalize the liquid nitrogen plant in Mbarara to serve western Uganda and greater Masaka.

The entity embarked on the revitalisation of the National Animal Quarantine Centre at Entebbe, for germplasm export and import facilitation. The centre is to also be utilised as a demonstration centre for management of superior livestock breeds.

During the financial year 2020/21, a lot of infrastructure development in preparation for receiving a total of 288 superior dairy breeding cattle from South Africa for tropicalization of Jersey and Ayrshire breeds were undertaken.

Infrastructure ranged from cattle sheds, modern spray races and hay ban, among others.

On the other hand, in an effort to boost community breeding activities countrywide, a total of 62,512 against a target of 72,000 doses of semen were produced at the National Bull Stud and Genetic Evaluation centre, and availed to actors along the ART value chain.

When it comes to conservation of animal genetic resources, a total of 166 Ankole long-horned cattle, 255 Mubende and small East African breeding goats were procured to support conservation efforts.

Meanwhile, Aswa ranch was revived to conserve zebu cattle. The report also highlights the multiplication of other livestock enterprises.

In an effort to increase breeding stock, a total of 1,907 against a target of 2,300 goat kids were produced on centre farms and availed to farmers across the country through various pathways.

Construction works on the National Genebank are ongoing and is expected to be complete by March, 2022.
During the same financial year, an administrative block at Livestock Experimentation Station (LES) was constructed and equipped.

Staff quarters have also been constructed on Bulago, Maruzi, Aswa and Rubona stock farms. On the other hand, during the financial year 2020/21, the entity embarked on the completion of a learning centre at Kasolwe stock farm.

The facility is meant to support livestock production and breeding skilling programmes, organised for communities.

Meanwhile, efforts were made to operationalize the Kasolwe feed mill by extending electrical power to the farm.