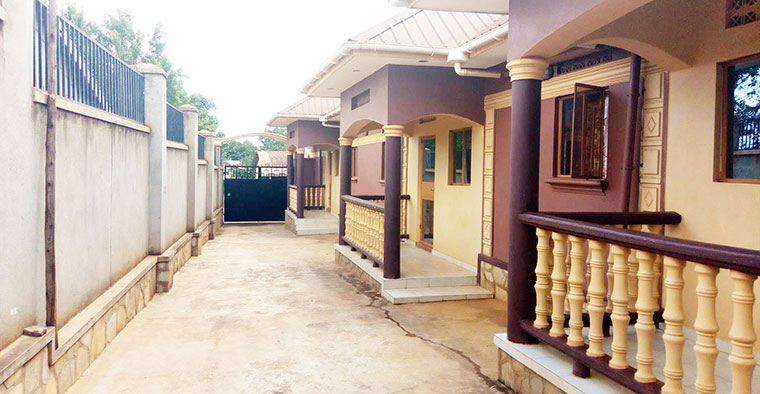 An housing block in Wakiso

There was a recent debate on Twitter on the cost of houses in Kampala. The argument was that houses were cheaper in some parts of North America and western Europe than in dingy Kampala and Wakiso.

A four-bedroom flat in Mbuya goes for Shs 650m or $185,000. In some other places such as Munyonyo, Garuga, Muyenga or Butabika, similar apartments can cost as much as $400,000 (Shs 1.4bn). These are same rates or even more expensive than in Dubai.

In Kololo, an empty acre of land goes for more than a million dollars. So, what makes the Ugandan property market so expensive?

Most people say it is because of corruption of government officials in Uganda, South Sudan and Eritrea. Although that could be true, I don’t think it is the only reason.

In Uganda and indeed most of Africa, once a boy turned 18 years old, he was expected to leave the parents’ house and set himself up by building his own house. Although the age may have changed, a man isn’t expected to live in their parents’ house long after university.

Also, most Ugandans consider a man successful after they have built or bought a house. A son-in-law who owns a house is talked about with glee. This culture has created immense pressure for people to build or own properties.

Also, many people aged above 35 saw how their parents suffered when they were retrenched and evicted from government properties. Besides, government largely doesn’t build houses for its civil servants anymore. Uganda’s housing deficit, according to Habit for Humanity, stands at 2.4 million units.

And there are some 900,000 units that are substandard and need immediate upgrading. So, there is demand for houses at all levels both in urban and rural areas. Let us not forget that Uganda’s population is one of the fastest-growing in the world and the rate of urbanization is increasing by the day. This has led to increased demand for housing.

That alone increases the cost of a house by approximately $2,000 (Shs 7m). Most property developers in Uganda borrow money at interest rates of upwards of 20 per cent annually.

The 2008 financial meltdown was because houses were available for anyone who wanted even when they couldn’t afford, which isn’t the case here.

In the West, the housing market has matured and there is a price ceiling apart from mega mansions for millionaires and celebrities. Let me explain using Kololo as an example. An acre in Kololo has reached its price ceiling.

There is a limit to how much you can sell a Kololo acre which isn’t the case in Gayaza. I can buy an acre in Gayaza today and double its price and still get a buyer. I can’t do that in Kololo because properties there have reached the price ceiling beyond which even those who have won a lottery wouldn’t buy.

The developed world also has infrastructure that enables people to live almost wherever they want. Somebody in Europe or America can live 100km from their workplace.

They wake up, jump on a train, bus or get onto a freeway and travel 100km every day. In Kampala, 100km is beyond Jinja or near Masaka town. Due to our infrastructure and lack of public transport, you can’t commute every day from that far to your workplace without suffering a nervous breakdown.

Yet the cost of land just 50km from Kampala is so low that many people can afford it but they wouldn’t be able to live there and commute to Kampala every day.

The cost of transport would be so high. The time spent to cover the distance every day would be so much. It takes on average two hours every day for anybody who lives 15km from Kampala to get to work and another two to get back home.

+3 #1 Lakwena 2021-09-13 14:50
Thanks Denis. The truth is; almost everything in this country is not only exaggerated and exclusive, but also discriminating and/or segregative.

In other words, the political class and economic class do not want to narrow the social economic disparity gap. Which is why e.g., the National Housing and Construction Corp was to build affordable housing for low income Ugandans, but the Corp was hijacked and sold o Libya.

We now have the demeaning stereotype "the vulnerable" (Ghetto), the honorable and venerable who literally want to worshiped.

Instead of the Imams and/or Clerics/Bishops calling for national prayers in the places of worship, now-a-days it is the self-declared venerable (sent by God) Gen Tibuhaburwa and Kitchen/Wife, Janet Kataha and URA establishments of this country. that call for national praying in State House and/or a stadium (independence Ground).
Report to administrator
+3 #2 Ask 2021-09-13 16:02
You did mention the issue of brokers who as well double prices for their huge commissions.

The level of taxation is extremely unbearable in uganda which double the prices.

The poor road networks as well have led people to pike up in areas close to the city, which makes the property costs much higher.
Report to administrator
+2 #3 Akao 2021-09-13 20:56
Another reason could be that sudhir rupeilla started to charge US currency.

Why would Uganda use a foreign currency domestically. That cost alone of converting ugandan shillings to US dollar is a burden to Ugandan
Report to administrator
0 #4 Tumusiime Raymond 2021-09-13 22:39
Great article.. everyone is heckling about land like it is a must do before you die or the only way to invest..I think we shall soon suffer our own financial or property melt down..
Report to administrator
0 #5 kabayekka 2021-09-14 01:29
Indeed housing is expensive in this country or in Kampala.

That is why of recent there seemed to be some hope when the parliament of Uganda certified several African townships as cities.

One hopes that such cities will not take on the policies of the Uganda National housing corporation. Much of the economic evils of this corporation are well known to the public and have been discussed well.

One hopes that since the UNHC inception during the 1960s, 60 years now, its housing stock could have an accumulated revenue of a total of over 10 million dollars from over a million houses.

And every year of that period of 60 years, the old and new housing would be bringing annual revenue to the government worth 3 million dollars. That would be good money to continue building national housing!
Report to administrator
+2 #6 Lakwena 2021-09-14 08:11
Quoting Akao:

Another reason could be that sudhir rupeilla started to charge US currency.

Why would Uganda use a foreign currency domestically. That cost alone of converting ugandan shillings to US dollar is a burden to Ugandan

Okao, although it is Generated,Ttransmitted and Distributed here, but like an "Imported Utility", Ugandans pay their Umeme Electricity Bills in the Mighty Dollar. Rate.

In other words, the country has been mortgaged, and as a matter of fact, Ugandans are Subsidizing the South Africans electricity Bills.

Wachireba?
Report to administrator
+1 #7 kabayekka 2021-09-14 13:38
And with such good money if it was available to the funds of the Uganda National Housing Corporation, these new cities would be able to take advantage of it and secure building loans and some of the equipment, unfortunately that is rotting in the Ministry of Works, to be able to rebuild their housing infrastructure.

Those concerned or responsible for such positive development in the various four corners of this country and end up sitting tight and happy in Kampala do so at their own peril.
Report to administrator
+1 #8 Mr. Daniel Pimental 2021-09-19 13:00
However, it is unfortunate that we are constrained to make the provision beyond what the budget can ..The bigger the house, the more expensive it will be to frame.
Report to administrator