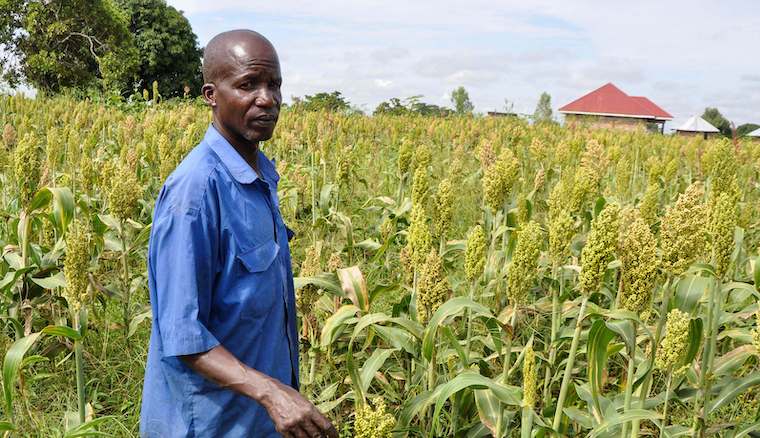 A sorghum grower in Northern Uganda, a beneficiary of UBL's LRM programme

Uganda Breweries Limited, established in 1946, has been a consistent contributor to the growth of Uganda’s economy and the socio-transformation of the country and its population. This impact is not only reflected in the company always being among the top taxpayers but in many other aspects.

UBL has always been in the top 10 taxpayers, at times being in a position better than the seventh position it occupied in 2020. The URA Annual Revenue Performance Report FY 2019/20 says UBL was sixth in VAT contribution, with a 31.68 per cent growth over the previous year; UBL was fourth of contributors to Local Excise Duty (LED) collections; and it was one of the three that made positive growth in that contribution- the rest made declines.

So, UBL contributes to Uganda’s GDP not only through direct payment of taxes but also indirectly through taxes paid by its suppliers.

UBL initiated the Local Raw Materials (LRM) to lead to various benefits to the national economy. Not only does LRM save the country foreign exchange that would be lost in importing raw materials, but it also provides market to local producers, especially farmers and also employment to Ugandans – the producers and the transporters.

UBL's LRM is a deliberate support to government’s policy of Buy Uganda Build Uganda (BUBU). The ultimate goal of the LRM is to attain 100 percent local sourcing of all inputs of production.

Outgoing managing director Alvin Mbugua told The Observer that in the last five years, the brewery has increased the number of farmers supplying sorghum, barley, cassava (tapioca), corn starch (maize), and sugar from 14,500 to 31,000 presently; that is more than double employment opportunities.

Mbugua added that the company has added more than five institutional partners along this endeavour of boosting local production and supply of raw materials and local knowhow.

UBL injects Shs 20 billion annually into farming communities and value chains to access locally grown materials for its production/brewing operations. Under the LRM programme, UBL supports hundreds of farmers with quality seeds and modern farming equipment, as well as gives them the necessary trainings throughout the seasons for improved productivity. UBL also provides ready market for farmers’ produce.

Since 2014, UBL has constructed more than 30 boreholes to sorghum-growing communities in the Acholi districts of Agago, Nwoya, Amuru and Gulu.

There is a prevalent African adage that health is greater than wealth. Indeed UBL takes this wise saying seriously through a lot of commitments and initiatives that many businesses and employers find a challenge. Not only does UBL offer medical insurance to its staff, it also gives six-month fully paid maternity leave and one-month fully paid paternity leave.

This is definitely a big cost to the company, but the board and management have for many years made this outstanding commitment as their contribution to the country’s having healthy and stable families and well-catered-for children.

Uganda Breweries is a regular donator to health facilities in the country. For example, in April 2020, Uganda Breweries Limited in partnership with Total Uganda and Stanbic bank donated Shs 120 million worth of fuel to the ministry of Health to support its coronavirus fight.

UBL also organizes or sponsors football tournaments (such as the Pilsner Super 8 Football Tournament), health runs, Black Youth Olympics, etc which help youth health and fitness. Also, UBL gives out good prizes to winners, which can help them as start-up for new businesses or as boost to existing businesses.

UBL carries out regular blood donation drives, in partnership with Uganda Blood transfusion Services. Blood, which is not for sale in Uganda, saves many lives.

Also under its health interventions, Uganda Breweries has worked with some public health facilities either under its Water for Life programme or directly as common cause donations. For example, UBL donated two underground water tanks each with 100,000 litre capacity of harvested rainwater to Entebbe Grade B hospital.  The project cost UBL Shs 495 million. This was on top of an earlier donation of three 10,000 litre tanks.

The Water of Life programme supports projects that help combat water poverty by improving access to clean drinking water and sanitation. UBL continues to invest heavily in water projects that have positive and long-term impact on thousands of people by reducing the incidence of waterborne diseases and by releasing time otherwise spent by women and children in search of water for alternative income-generating activities.

Water for Life is a minefield of activities, a long catalogue. We may mention a few over one decade for simplicity’s sake:

Bulangira small town water project in 2015: UBL partnered WaterAid Uganda to implement a three-year water and sanitation project in Bulangira, Kibuku district worth Shs 1 billion. The project consists of improved sanitation and hygiene, providing for over 3,000 people. The project will also construct a water supply system that will benefit 3,200 people as well as construct public latrines and a bathroom at the health center III.

Mbarara Regional Referral Hospital in 2014: UBL fully funded the construction of a water reservoir system worth Shs 630 million. Consists of a 200,000-litre underground tank and two over-head tanks each with 24,000-litre capacity, water treatment and filtration, pumping and distribution system across the hospital. The project benefits 600,000 people.

Northern Uganda projects in 2014: UBL sank 15 boreholes in the three districts of Lamwo, Pader and Kitgum. The project cost Shs 14 million and benefits 15,000 people. In addition, five boreholes were sank in Apac.

Water filters for western Uganda in 2013: UBL donated 50 water filters to 22 health centres IV within eight districts in western Uganda to solve the problem of access to clean and safe drinking water for patients within the wards.

Jinja Regional Referral Hospital Water Project in 2012: UBL provided a water-harvesting system consisting of a central water reservoir of 100,000 litres and two overhead water tanks of 24,000 litres each. This project is worth Shs 360 million and benefits 360,000 people.

Recognising that although its products add enjoyment to life, they can be harmful when abused, UBL carries out campaigns to protect people’s lives and health. One such campaign is on responsible or positive drinking which UBL does through commercial communication that castigates drink driving, underage drinking and illicit alcohol business.

Besides campaigning for behavioural change among consumers, UBL routinely drills its staff to master the code of self-regulation to and market and sell the products responsibly. There is a committee for overseeing the Diageo Marketing Code (DMC); it approves all materials before they are shared with the public to ensure they adhere to the code. All staff, agencies and partners that are responsible for any form of communication are taken through DMC training to ensure compliance to the code.

To keep the awareness on drink driving and underage drinking alive and lively, Uganda Breweries keeps crafting and rolling out specific campaigns such as the Friends Don’t Let Friends Drink Drive campaign, the Join the Pack campaign or the Red Card to Drink Driving campaign, plus appointment of prominent media people, sportspeople and celebrities as champions or ambassadors of safe drinking.

Barmen and alcohol retailers are routinely trained on responsible serving to equip them with knowledge and skills on how to deal with issues of a drunk or underage customer; and bar and store activations and branding aimed at reminding people to drink responsibly are positioned at the points of purchase.

Uganda Breweries injects a lot of money annually in scholarships to bright but disadvantaged students; this in turn raises the quality and efficiency of the national workforce. The company spends Shs 1 billion annually on scholarships. It is reported that over the last 17 years, Uganda Breweries’ Skills for Life programme has awarded over 200 university scholarships.

To answer to increasing demand for more practical entrepreneurial skills for the youth to reduce unemployment levels around the country, UBL in 2017 re-focused its scholarships on technical and vocational courses rather than university academic courses.

For example, in 2018 and 2019, UBL sponsored 70 students to go to vocational schools. In addition, UBL will support these students’ mentorship and training to build their entrepreneurial acumen from Enterprise Uganda.

UBL sometimes uses marathons and short runs for purposes of raising awareness about issues like tree planting and environmental sustainability, as well as the value of physical exercise, fitness and health. It also sponsors youth sports competitions.

UBL contributes to common causes and emergencies, supplementing government relief services. A few examples stand out: a Shs 50 million cash donation toward resettlement of the people of Bududa following the 2012 landslides; Shs 30 million donation of water purification tablets and sanitation kits to victims of the Kasese floods in 2013; and a staff-driven initiative in support of Congolese refugees who had crossed into Uganda due to an insurgency in their country in 2013 – the staff donated clothes, blankets and bed-sheets to assist the refugees who were camping in various locations in western Uganda. Such interventions add value to community life, survival and sustainability.

Another case example is when Covid-19 had broken out and there was a national lockdown, UBL partnered with Stanbic bank in April 2020 and they donated Shs 120 million to the ministry of Health’s anti-Covid efforts. This donation was on top of 100 mattresses UBL had donated to Covid isolation centres and 100 mattresses to government hospitals.

Current UBL chairman Japheth Katto said UBL had early 2020, under its raising the Bar programme, extended support to over 2,000 bars, restaurants and their employees worth $1 million to put in place SOP safety practices. This included hand washing kits, masks, temperature reading equipment and point-of-sale materials, among others.

Above all, UBL has been known across the years for supporting various cultural activities of different institutions like coronation anniversaries and sports tournaments, among others, where the spirit of togetherness and celebrating life take place.

UBL annually donated handsomely to the KCCA carnivals when they were still existent.

The LRM agenda has promoted women empowerment, moreover because 50 per cent of the materials are grown by women or women groups. When it comes to contracted agents who bulk the crop for delivery to UBL, 60 per cent of individuals and company directors are women, according to UBL official records.

UBL also pays key attention to gender inclusion in its recruitment and promotion of staff.

Uganda Breweries’ involvement in environment conservation involves employees, other corporate bodies, government bodies and the surrounding communities and the public at large.

UBL has a Running Out of Trees (ROOT) five-year programme which aims at restoring or conserving 40 million every year across the country. It also has the staff-driven UBL E-Green Team programme focusing on environmental conservation through tree planting.

In 2005, UBL set up a world-class Effluent Treatment Plant that filters and purifies waste water to potable state before it is disposed of. In 2015, UBL invested an additional $4 million to expand the effluent treatment so as to be equipped for increased future production.