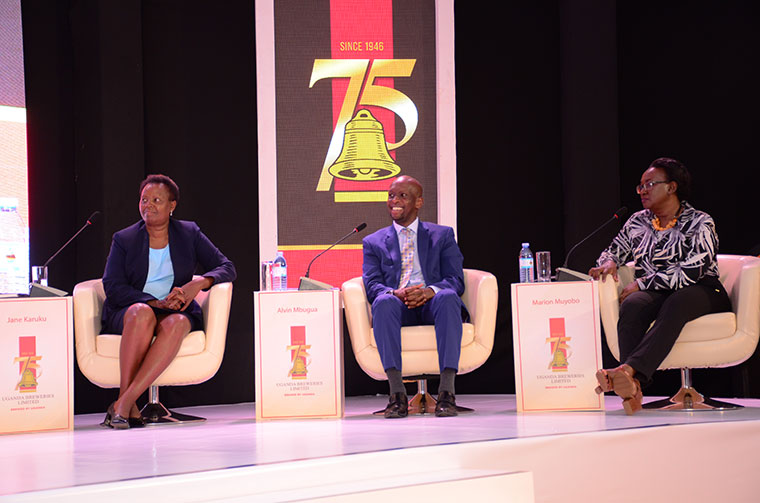 Current, past leaders of Uganda Breweries reflect on their magic of 75-year journey of resilience and innovation

Uganda Breweries Limited, a subsidiary of East African Breweries Limited, has weathered the storms for 75 years where many others have come and gone thanks to its sustainable business model. The group thrives on its culture of doing business the right way, from grain to glass, riding on ethics and integrity.

East African Breweries was established in 1922, and started Uganda Breweries Limited as its subsidiary in 1946. In 1950, the subsidiary produced its own first products in Luzira, Kampala.

As Uganda Breweries Limited celebrates 75 years of milestones, the company’s leadership organized its former and current leadership for ‘deep dive discussions’ on the tactics, lessons and milestones that enabled UBL to be one of the most resilient and long-lasting companies in the country.

The roundtable discussion chronicling the journey of the brewery through the years was held at Serena hotel Kampala on Tuesday, August 31. Master of ceremonies Juliana Kagwa, director of Corporate Relations at UBL, said the discussion was one of the two climax activities of the six-month diamond jubilee celebrations; the second one held on September 1 was launch of a sustainability report.

“We are celebrating our ability to change with the times, our championing of hope, our journey of excellence and resilience. We have made healthy profits, and we have also contributed to the country’s socio-economic transformation,” Kagwa added.

Mugerwa said celebration activities have been going on for six months, under the theme, ‘75 years of celebrating life and growing Uganda ’. He explained that much as the company feels proud to have lived this long in a country where many companies fail to celebrate a decade, the main point of celebration is its significant contribution to Uganda’s socio-economic transformation.

Uganda Breweries Limited is a subsidiary of East African Breweries Limited (EABL), the leading beverage alcohol company in East Africa in which Diageo is a majority shareholder at 51 per cent, since year 2000. UBL produces and or supplies beers, spirits and non-alcoholic beverages in the Ugandan market.

Mugerwa said UBL has been a trail blazer in a number of respects, such as being the first, if not the only one up to now, to give its staff six months of paid maternity leave and one month of paid paternity leave….. “We are celebrating leadership, not just the making of money; a leadership and business model that keep you on the top.”

Mugerwa said Uganda Breweries has over the years carried out a lot of community projects and social campaigns for the benefit of customers, other stakeholders and non-stakeholders alike. He said these commitments by the company are not just the usual ‘corporate social responsibility’ of giving back to society but, rather, ‘social investment’ for the benefit of present and future generations and being a role model in shaping features of a harmonious and resilient society.

“We strive to continue to be relevant to government, the consumers, our employees, our farmers and other suppliers; keeping warm relations pays well,” he added.

Jane Karuku said, “Our commitment has always been to operate in the right way in everything we do. This means embedding business integrity in the way we work, everyday, everywhere.” Hence, the group carries out regular and refresher trainings of bartenders so that they may serve customers better and more satisfyingly. It also spends a lot of money on scholarships, she said.

Some of UBL’s social investments include: the responsible drinking campaign aimed at reducing drink-driving traffic fatalities and general alcohol abuse in society by people who do not choose to enjoy alcohol responsibly. Called the Red Card or DDAD [Don’t Drink and Drive], this initiative has saved many lives in the last 10 years. The company also carries out water replenishment projects, tree planting and environmental cleaning campaigns; it promotes green energy in its systems and sites.

“Trust and respect are our philosophy as the employer; so, we apply diversity and inclusion in our manpower policies. We believe, and we have proven that a diverse team performs better. We ensure that we surround ourselves with great people, people with talent. We continuously improve skills of our staff, both for internal relationships and for relations with external stakeholders,” Karuku said.

She added that they always do consumer research to keep up with consumer needs and trends and come up with appropriate innovations. “Most importantly, we listen to the consumer’s needs and beliefs.”

Over the years, UBL has worked alone or with a variety of partners including government agencies, private sector and civil society to initiate, fund or support various projects for communities and environmental preservation.

Some of UBL’s flagship programmes include Taasa Obutende [Save the Environment], UBL Youth Mentorship Competitions, Red Card Initiative aka DDAD [Don’t drink and drive], Water for Life, and ROOT [Running out of Trees] Initiative.