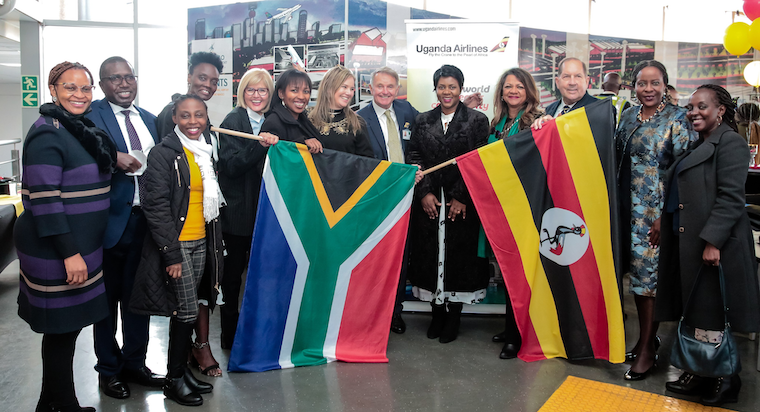 A cross-section of Ugandans who reside in or frequently travel to South Africa is excited about Uganda Airlines flying direct to and fro Johannesburg, South Africa.

The revived national carrier made its inaugural Entebbe-Johannesburg flight on May 31. The airline will operate four flights a week on Monday, Tuesday, Thursday, and Saturday. The return air ticket costs $341 (about Shs 1.2 million).

Although the average price for a return air ticket aboard Ethiopian Airlines is lower at $270 (about Shs 950,000), theirs is not a direct flight, making Uganda Airlines have an edge over other airlines including Kenya Airways and Rwandair, that also fly the Entebbe-Johannesburg route.

Monica Rubombora, the resident representative Uganda Airlines, South Africa, says her team is working tirelessly to ensure each flight is fully booked. She says bookings so far indicate that several people in South Africa want to travel, regardless of restrictions put in place to combat the spread of COVID-19.

She also says apart from South African nationals, some of the foreign nationals from the East African region, including Ugandans are potential clients for the direct flights.

"I see Ugandans have been traveling to South Africa despite the pandemic. Many indicated that they were here for medical treatment, for business, and for study. So this resumption of direct flights to South Africa by Uganda Airlines is a big deal. It represents a significant turning point for the travel industry which had slumped over 70% last year. This reflects business confidence between the two countries, everything is in place," said Rubombora.

The four-hour Monday flight from Entebbe is scheduled at 8:40 pm while the return flight from Johannesburg is slated at 1 am on Tuesday. A Zambian businessman says that though the cheapest EBB-JNB return air ticket is currently is between $268 and $280 by Ethiopian Airlines, passengers destined for Johannesburg have to first connect and wait in Addis Ababa, Ethiopia for a connecting flight.

“The waiting hours at Addis Ababa can take between 4 hours to even half a day," he says. "So by the time you reach your destination, you will be extremely exhausted. So the ET [Ethiopian Airline] ticket may be the cheapest on the market but it is expensive because of the stop-over.”

Eng. Mohamed Kaggwa Maseko, a Ugandan permanent resident in South Africa agrees. He says that “it's been a hustle having to stop over in Nairobi or Addis Ababa for long hours. And the influx of procedures at every airport in transit was hectic. So Uganda Airlines will save us from all that and probably overtake these regional carriers.”

“It will be a great privilege to finally get a direct flight back home. We have been hustling with these non-direct flights ever since South African Airways (SAA) suspended direct flights from Entebbe,” he added.

Maseko says that though SAA air tickets were slightly more expensive than those for KQ and ET, a passenger would be sure of only stopping at their final destination.

SAA halted direct flights to Entebbe in February 2020 due to financial constraints. At the time, Maseko says the air tickets for SAA were $550 (about Shs 2.5 million), while KQ was charging $400 (about Shs 2 million).

“When you use KQ, it is a must that you will pass via Nairobi and the stopover lasts between 4 to 18 hours, and the waiting hours have become longer probably due to COVID-19 protocols," Maseko says.

On top of the long waiting hours during connection flights, Maseko says there is also the risk of luggage being bungled up in exchange.

“So, direct flights are indeed a privilege and I am also happy that the Uganda Airlines air ticket price for this route are low,” Maseko says.

Another regular traveler, Lilian, is excited that she will be able to travel from Cape Town to Johannesburg and thereafter board a direct flight to Entebbe whenever she wants to visit her family.

She says she has been using RwandAir because Kigali is less than an hour from Entebbe and she has not had any major issues regarding her baggage.

"I don't have any complaints about RwandAir, it is just that the stop-over in Kigali which sometimes means that you will have to wait longer for a connection."

Maseko says he last used RwandAir in 2019.  "The air ticket price was the lowest at the time at $380, and I stopped using the airline after we had to stop over in Kigali at weird hours and then made an  unscheduled stopover in Lusaka."

Maseko says the stopover in Lusaka affected his travel plan because "the airline service was reasonable until they delayed and eventually returned me back to Entebbe for a 'stupid' reason that my permit was only weeks to expire yet I have permanent residence in South Africa."

Meanwhile, Uganda Airlines commercial director Roger Wamara says Johannesburg is important for the national carrier because it hosts a large number of Ugandans and also a number of South African companies operate in Uganda. These companies include Shoprite, Game Stores, MTN, Standard Bank among others.

Wamara says the long-haul destinations are in the offing, with flights to Dubai expected to commence end of June, then London in July. Guangzhou and Mumbai flights are slated for later this year.

Unfortunately these are public passengers who belong to a very small percentage of the travelling public in many countries in the interior of the continent of Africa.

The time when this country acquires the modern train transport, that is when better development will come to these inland countries. Modern mass transportation and communication will have been accomplished!
Report to administrator