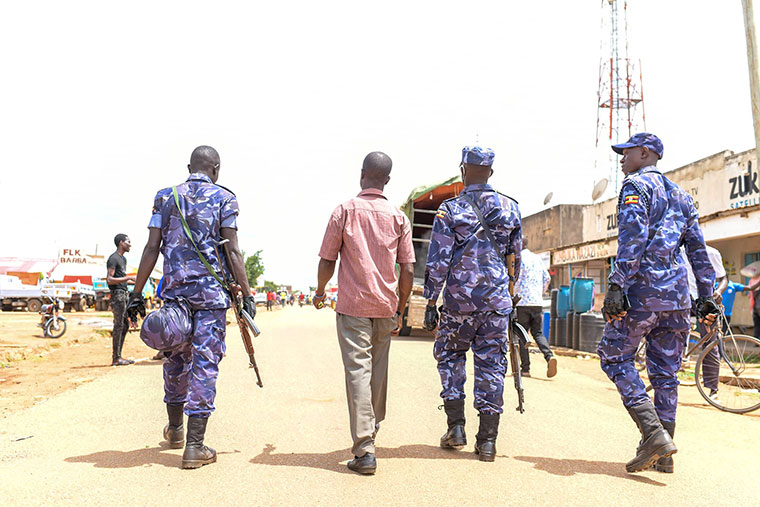 Police lead away a suspect apprehended in the operation

Mbale, which used to swap the number one position for stealing electricity with Masaka, is rolling back energy losses, Umeme Limited has announced in a statement.

The district has reduced losses from 57 per cent in 2016 to 32.8 per cent to date, which, although higher than the national mean of 17 per cent, is a movement in the right direction. The reduction is due to the anti-power theft operations in the city and sensitisation of the public about the risk of electrocution.

Generally, energy losses increased to 17.5 per cent from 16.4 per cent of 2019, on account of limited field activities due to the coronavirus pandemic restrictions on movement and suspension of the free Electricity Connection Policy, which led to increased illegal connections.

Selestino Babungi, the Umeme managing director, said: “With the easing of restrictions, we have recommenced the implementation of our loss reduction plans under Operation Komboa. This is aimed at redeeming our network from illegal users and operators so that customers get safe and quality electricity.”

He said the operation, which follows a series of awareness drives in the communities, also identifies illegal connections, disconnects them, investigates suspects and presents them in the courts of law for prosecution.

Over the last few weeks, Umeme, backed by Uganda Police, carried out an operation to check energy theft. Peter Kaujju, Umeme Limited’s head of communications, said: “Much as power theft is beginning to take a downward trend, it remains a challenge costing government money but also taking some lives of Ugandans. We have stepped up awareness but will continue with enforcement to weed out the culprits.”

Many electricity users were taking advantage of the lockdown in 2020 to steal electricity, knowing that Umeme staff would not show up unexpectedly to check their meters and audit their consumption patterns.

With the lockdown now lifted, the company has resumed the operations, catching many suspected thieves unawares. Power thieves cost the company Shs 100 billion annually, money that would have been spent on upgrading the network to ensure reliable supply.

Power theft in Bugisu is attributable to politicians who promise free electricity. The Operation Komboa ball is still rolling, and in the course stretching the patience of those waiting on it to run out of steam.

From an average of two days in a week in the field, the technical teams, accompanied by law enforcers, are now spending at least four days. They are hopping over streams to get to where electricity poles are to audit the meters.

While some consumers pray for the suspension of Komboa so that they could steal power, Umeme’s teams in the field are enjoying the assignment. There is a lot to learn, to unearth. For instance, in Pallisa district, a customer, as ingenious as they come, had a resistor soldered in the meter serving his premises. That way he made the meter record the current flowing through it in more-or-less slow motion.

So, he could use power for whatever he wished while not having to worry about the bill. Yet another customer in Mbale city got most probably an Umeme impostor to climb the pole near her home and put a padlock on the meter.

She later told the field team that she had the meter locked so that no one could ‘tamper with it.’ When Umeme’s contractors removed the padlock, they found that this customer had bypassed the meter.

So far, the anti-power theft operations have been carried out in Kampala, Jinja, Pallisa and Mbale. Next will be Mbarara, Mityana and Masaka. John Nuwamanya, the metering services manager for Kampala East and North East, says: “If power theft is not checked, we will be losing billions of shilling. So, we are not stopping Operation Komboa.”